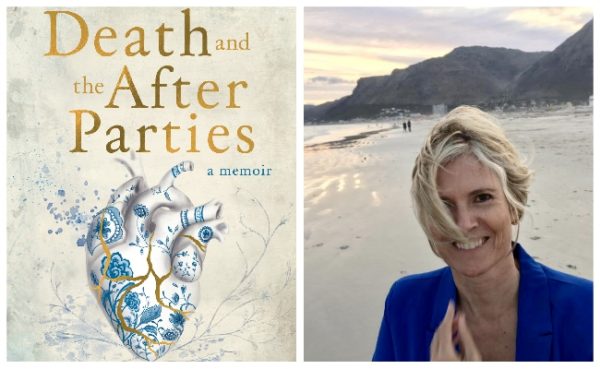 Death and the after parties
Joanne Hichens
Karavan Press

If fate were mine to control, I’d deposit Joanne and Robert Hichens barefoot on a remote Greek island, where they’d adopt an ouzo-quaffing, peasant lifestyle, interrupted only by occasional visits from skyscraper offspring! In her moving memoir, Death and the after parties, Hichens describes how she was dealt a very different hand of cards, how many times she stumbled when forced to play it – and the safety net of people who helped her towards a more constructive endgame.

This publication by Karavan Press, with its trademark jacket cover and eye-catching porcelain heart artwork, grabs the attention from the opening sentence: “For now, I’m done with visiting graveyards.” No one will argue that Hichens has been overexposed to graveyards, having lost four central figures in her life in quick succession – both parents, her husband and her mother-in-law.

Her journalistic eye for detail enables the reader to visualise and empathise with the most intimate of moments, and it is impossible to remain unmoved by the losses which confront her – but this is essentially a memoir of a crowded and colourful life. The reader follows the unsettled childhood of an anxious little girl eager for stability, forced to adapt to a life where change is the norm, as she trails behind a father in a well-cut suit and a sequinned mother who always smells of Estée Lauder. Pretoria, Ottawa, Skiathos, Wellington, Taipei, Houston, New Orleans – not necessarily in that order: order’s in short supply when your dad’s a diplomat.

As a wordsmith, Hichens needs no more than two words to sum up the complexity of family relationships. Apart from Mom and Dad, there’s Golden Brother. Black Sheep. Sister, Mother-In-Law and New Wife. Everyone knows that families are minefields, so it’s easy to understand the fight over the family silver when Mom and Dad die! The implacable logic of a timeline warns us that we must anticipate the death of our parents. Hichens’s evocative writing makes it easy to empathise as she loses both to cancer. The helplessness. The waiting. The watching. Relying on morphine. Fearing – yet hoping for – an end. All too familiar for too many readers.

At the heart of the memoir is the unexpected death of Hichens’s husband after a heart attack at 51. It’s a modern death. Hichens googles his symptoms when indigestion wakes him early one morning. Social media spreads the unbelievable news when his heart stops beating 15 minutes after walking into the emergency room at the Constantiaberg hospital while Jo parks the car. Facebook messages of condolence and support pepper the text as she stumbles through the darkest of days, the longest of nights, an avalanche of memories of all she has lost. One of the many regrets that haunt her is that she unfriended him the night before he died. Help is at hand from her therapist, friends and colleagues – and, even more reliably, from booze and pills. Any reader acquainted with the night will find something to which they can relate in this honest portrayal of despair.

The many followers of the humour and wokeness that characterise Hichens’s COVID blogs can be assured of equal entertainment here – such as a shopping trip to Checkers to restock the pantry, in response to complaints from starving children. She trips, spilling both herself and the contents of her laden trolley into an undignified state of disarray beside the frozen peas. Disconcerted by the cluster of concerned fellow shoppers who gather around her, she impulsively blurts out that her husband is dead. An appalled silence falls – until one of the concerned shoppers launches into a loud, impromptu prayer service! The mind boggles.

Anecdotes such as these ensure that Death and the after parties does not become an unrelentingly traumatic read. It is threaded through with strong strands of love – for the dead, for the living and for life itself. Hichens is an accomplished journalist, and her ability to conjure up a strong sense of place adds a valuable dimension to the whole – the reader can visualise Cape Town scenes from Muizenberg to the Maitland cemetery, with its treasure trove of local history embedded in the names engraved on the tombstones. Hichens has written an evocative and memorable description of a difficult journey which somehow leaves the reader hopeful for the future.