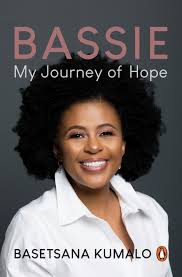 “Basetsana represents change, newness, forgiveness, unity and strength. She is a woman who broke through limitations and borders.” – Bonang Matheba (229)

I could be forgiven for not having a real interest in the television show Top billing. For me, the show represents a disturbing side of capitalism (I am by no means anticapitalist myself, just a very loyal critic thereof). But, for some reason, I feel a tad different about another quite controversial matter: beauty pageants. It’s not the women parading in front of crowds of people, or the competition or the “big night”, the questions or the dresses or the makeup or all of the drama that goes with it. No, it is the fact that the Miss South Africa platform does create important ambassadors for our country. And it does give women a voice and an opportunity to impact the world for the better. The name of Jacqui Mofokeng is perhaps better known in relation to the Miss South Africa concept, being the first black South African to win the competition, in 1993. Kumalo credits Mofokeng as the one who paved the way and who normalised the idea of a black Miss South Africa – something that was very strange to many people at the time. But the book encompasses much more than Miss South Africa or Top billing.

Bassie: My journey of hope is a really gripping read. The book starts off with two forewords, one by advocate Thuli Madonsela and the other by the former deputy president of South Africa, Phumzile Mlambo-Ngcuka. Kumalo was born as Basetsana Makgalemele on 29 March 1974 and came from very humble beginnings. She grew up in the segregated township of Soweto. Her father was a bus driver, but the family revealed an entrepreneurial spirit that would prove to have a lasting impact on Kumalo, with her having to assist the family from a very young age with selling food. When she was 16, in 1990, she was entered into Miss Soweto, which she won. She went on to study education at the University of Venda, and she details how she had to hike to the auditions for Miss South Africa during the time she was writing exams.

Winning Miss South Africa obviously greatly impacted her life, but ultimately it was just a stepping stone. She never returned to the University of Venda, but did obtain a degree later in life from the University of South Africa, majoring in political science and communication. When Kumalo became a presenter for Top billing, she cemented her celebrity status in South Africa. But the book is by no stretch just a mooi storie of the life of Kumalo. She goes into many disturbing details of her experiences. In one chapter, Kumalo describes how a specific stalker became a lifelong part of her story. In other chapters, she details failed business ventures, her challenges in conceiving a family, court cases, social media controversies and the passing of family members (the family used the services of controversial heart surgeon Dr Wouter Basson). Kumalo makes it very clear that failure is part of life. Failure is inevitable, but regrets of not trying are far worse than failure.

What struck me about the book, in particular, was Kumalo’s passion and dedication to South Africa: despite her work as a Top billing presenter and travelling the world, very little of that is reflected in the book. Instead, she writes fondly about her relationship with Nelson Mandela and his spouses Ms Winnie Mandela and Ms Graça Machel. Nelson Mandela famously served only one term as president of South Africa, believing in passing the baton on – something that Kumalo also stresses in this book. Religion also plays an important part in her life, and she often speaks about her faith in God. There is an expression in Africa that says it takes a village to raise a child, and mentoring the youth naturally also forms an important part of the work that she does.

Bassie: My journey of hope is truly an inspirational autobiography. Kumalo continues to be an ambassador and a leader, and this adds an important layer to the book. Besides its wonderful historical detail, the book truly lives up to hope – but also hard work and commitment – to achieve and to serve.