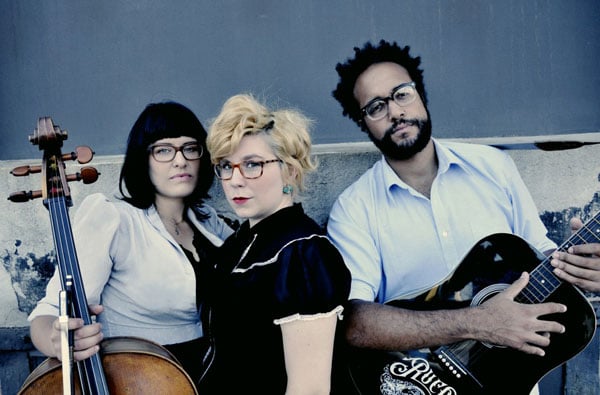 The Brooklyn based folk-pop trio, Pearl and the Beard, has been making music since 2009, but it is only until a recent, perhaps fateful, discovery that Chrizane van Zyl fell in love with their music. And with indie and folk music alive and well in South Africa, she felt it necessary to share this international find.

Hi guys. Thanks so much for taking the time to chat to us! How are things in New York? (We've just entered a much anticipated summer in Cape Town)

JM: Things are great! Winter in New York is a great time to be holed up in the studio. We're really excited about how our new album is coming together and we can't wait to share it with you guys next year!

Tell us more about the local music scene over there...

JM: The nice thing about New York is that there's such a great variety of performers. There are pop stars in big arenas, people tap dancing and playing buckets in the subway, polka bands and Balkan brass in cafes, rock bands with puppet singers in night clubs, everything you can imagine. It's very inspiring to see how music means such different things to so many different types of people.

You guys met each other at open mic sessions in the city a only few years ago. Are these very popular and who typically attends these?

JM: The open mic scene is notorious for being very competitive in New York, but there will be these waves of great bands coming out of particular clubs, like the AntiFolk movement from the Sidewalk Cafe in Manhattan which introduced the world to The Moldy Peaches and Regina Spektor. People who tend to seek out the open mic experience here are adventurous people who work very hard at their craft and are willing to take risks. It's been a long time since we've had time to return to our roots at an open mic night, but I imagine if we went back we'd see a lot of the same glimmer in the eyes of the performers that we had back then, and we'd probably run into some old friends.

Have you ever been to South Africa? We'd love to see you perform here ...

EHP: We have never been outside the United States, Canada or England. We would love to come to South Africa!  I've had quite a few friends visit there and they've all loved it.

Tell us more about your music.
JJ: The criteria for a Pearl and the Beard song is simply that we all like it. Early on, we seemed to gravitate toward more simple and acoustic sounds that highlighted our voices. These days we're building from that and expanding to fill bigger spaces that we've played and let our instruments do a bit more.

I read this interesting article on the stories behind some of your songs, all of which seem extremely personal to you. Where do these songs come from?
JJ: They come from all over the place. With this new album we decided from the beginning to get a lot more personal than we have in the past lyrically. Having been on the road and doing this for a while we've just seen and heard so much good music. Influences naturally seep in, as well as a desire to push ourselves more and more.

JM: Our writing process is almost 100% collaborative, so it really depends from song to song where each one has come from. One of the more exciting parts of that process for me personally is when one of us writes a chord progression or lyric and then another one of us plays it: there will be an original meaning from the author and then that context is transformed by its performer. It's fascinating and fulfilling to feel that shift in intent and interpretation.

What can people expect to see, hear and feel at a typical Pearl and the Beard performance?
JJ: As far as feelings go, it depends on what people bring with them to the show. If you're feeling light-hearted, heavy-hearted, or something in between, the space we and our fans create will directly affect the listener.

Emily, this one is for you. I used to play the cello and hearing you play has inspired me to save up harder, so I can take it up again. Isn't it just an amazing instrument? When did your love affair with the cello start?

EHP: I'm so honored!  The cello is an amazing instrument, and I'm so glad to hear you play! I think your choice of the words "love affair" is a good one partially because, yes, my relationship with the instrument can feel "romantic" but, it can be tumultuous, too – my cello and I have our good and bad days, just like a regular married couple. Even though I started playing quite young, I probably didn't really fall in love with my instrument until my bachelor's degree. It wasn't until I started practicing and studying at very high level that I fell in love with the instrument and the incredible repertoire that's been written for it.

I've noticed all sorts of interesting sounds on your albums. You seem to enjoy experimenting with alternative ways to play your instruments. And then there's your most powerful instrument of all ... three extraordinary voices.

JJ: Thanks! We work for the song. Whatever the song needs or doesn't need we go with that.

You did something very interesting with the release of your single, "The Prodigal Daughter". If I’m not mistaken, the song was never released on disk, but available to download from band posters which you sold?

JM: That's right! The idea was to explore art and music as a symbiotic organism. Since most listeners experience music from single to single these days, it made sense to make a piece of art dedicated to a single piece of music and celebrate it as its own piece of art.

You guys also have an impressive collection of fan art posted to your Facebook page. Pearl and the Beard has some seriously dedicated fans, right?

JM: Our fans are incredible. It's humbling that so many of them have created artwork in response to our music: it inspires us to know that we've inspired them. And there's this very true, very real sense that they not only support us and our music, but they also support each other. Our street team, the Sweet Electrons, for example, started out as a group of volunteers who would help put up posters to promote shows, but in the past few years they've grown into this phenomenon. They don't just spread the word about our band with complete earnestness and passion, but they also help each other in times of need in their personal lives. It's a true gift that our music has been a catalyst for so many real-life connections.

Pearl and The Beard has released two full length albums, titled God Bless Your Weary Soul, Amanda Richardson (2009) and Killing the Darlings (2011) to date. Their next album is rumoured to be released soon.