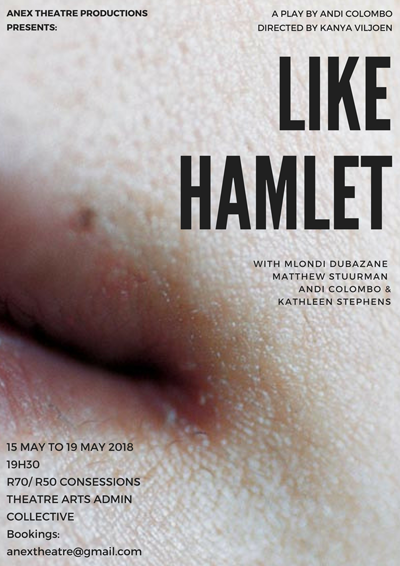 “Hamlet watches Ophelia. He sings, his hands float in front of him helplessly. Gertrude watches Hamlet.
Claudius watches Gertude.
The mirrors watch them all.” – Like Hamlet

Like Hamlet is a postmodern, poetic interpretation of Shakespeare's classic text, Hamlet, which lifts four key characters, namely Hamlet, Ophelia, Gertrude, and Claudius, out of the context of the play and into a liminal, cyclical space, where all their human emotions, such as lust, betrayal, love and jealousy, become magnified. These characters find themselves speaking through, against, around and away from one another, exploring the dualities of light and darkness; truth and deceit; voice and the body. Like Hamlet was born out of a desire to see what the characters in Shakespeare’s Hamlet would do in other spaces, how they would operate divorced from their context, and what would happen if they were given an opportunity to speak for themselves, and speak truthfully to their feelings. The script explores longing, desire, intimacy, anger and mourning, not only within the written language, but within the body itself. Finally, what remains is the question of what it means to love, to give of self, to breathe within the spaces found between two bodies, to find space within your own body.