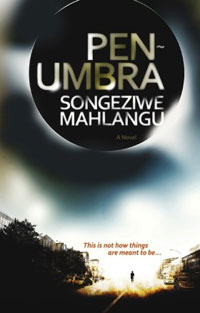 A challenging and perplexing read on all counts, Penumbra is a debut novel at pains to avoid any easy explication or clear conclusions. It is an evocation of mental breakdown, disillusionment and displacement, one where the setting, characters, even the writing itself, seem always to be shrouded in the darkest hues of the opaque. It is a novel that stands largely in the shadows of work done by the late, great K Sello Duiker, particularly his searing Quiet Violence of Dreams, as it is also set in Cape Town, has a protagonist that spends time in a mental facility, and is focused largely on the disenchantment and isolation of the main character, Mangaliso, who works a crushingly dull finance job in the city. While things never escalate to any Kafkaesque dimensions, Manga’s downward spiral veers from unprotected sex, heavy drinking and regular bouts of sniffing cocaine with friends to a seemingly fruitless road to redemption in the form of a highly paranoid turn to religion, where anyone and everyone he comes across seems to be conspiring against him or an unrepentant sinner. By the novel’s conclusion, unsurprisingly stages in a mental facility where caregivers even appear to be manifestations of outright evil, or the Antichrist, the reader has been taken on a perilous reading journey where little if anything is as it seems.

In trying to make sense of this strange, yet somehow beguiling, novel – one where the writer isn’t afraid to tackle issues such as post-apartheid world-weariness and ennui, domestic/gender violence, the apparent rootlessness of many black, middle-class young people, the struggle for intimacy and trust between sexual partners and close friends, unfulfilled aspirations, the difficulty of finding meaning in the cold facts of the quotidian, mental instability, the search for creative inspiration, community ties and individual identity – one must most certainly unpack the title on offer.

A penumbra is a partial eclipse, a partial illumination, a kind of play between revelation and concealment, shadow and light for our purposes. With the text framed by such shadows and shadowing, no doubt intentional, a central conflict emerges: form against feeling, or telling against showing. The novel reads like an extended fever dream. You are never quite sure where you are in the telling – some events appear and reappear, the narrator, Mangaliso, is utterly unreliable, the use of the word “death” and various forms of dying litter the page, and there is an animating discord between what is real and what is perceived. Thus, for every moment of minuscule intimacy (feeling) between the reader and the narrator, hard-earned though it is in slowly lurching forward like the Second Coming towards Bethlehem, there are overwhelming lacunas, shadows for the reader to make sense of: Is Manga making up all of his narrative as he goes along? Why are we being told certain details, why do others remain completely obscured? Is the reader being kept in the dark intentionally, in some dizzying metaphysical or metatextual conceit that few will be able to decipher, or perhaps just give up on entirely?

Mahlangu’s novel is characterised by prose that is stripped down, bare bones, devoid of sheen or sparkle. Staccato, scattergun sentences hurtle like stray bullets at the reader’s solar plexus – from the get-go we enter a domain where black and white do not exist, only a myriad shades of grey – and the effect is one of defamiliarisation and distance. We follow Manga’s exploits and his telling with a kind of detached world-weariness: it comes as no surprise that Coetzee features on occasion as intertext.

Penumbra is a thoughtful effort that seems to suggest that (the) literary form itself – the structure and style of the text in question – must suitably reflect the mental states and splitting of the city’s young, black subjects. If they are unfeeling, pernicious, out of touch with themselves, then the reader, too, must be confronted with a form that is uncompromisingly austere, unembellished, spartan, and even brutal. If this story is a reflection of where a part of Cape Town, and by implication the urban black population of South Africa, is or is heading, then Penumbra has illuminated a most harrowing and sobering collection of home truths.

Readers looking for a redemptive narrative should look elsewhere. This chronicle of discontent pulls no punches and gives no quarter, and asks much of its audience. Yet, for the brave, and the initiated, those that have always known deep down that the best literature makes us question our world rather than feel too sheltered within it, Penumbra is well worth the effort. Welcome to Purgatory.