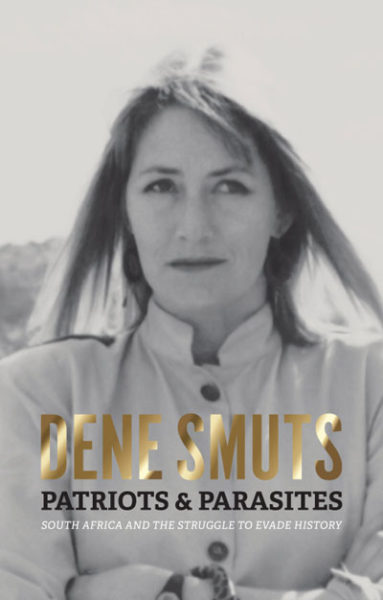 “If the question is whether South Africa can evade history, then we need, at least, to hold up as true a record as possible of that history. The best way of doing so where records are not available, or are as contested…, is to give as many accounts of what occurred as possible. This memoir is one such contribution to our recent history.”

Smuts writes from within history, a passionately lived history. Her fight against censorship as the editor of Fair Lady in the 1980s, her understanding of Thabo Mbeki’s legacy, and her reading of the recent Rhodes Must Fall and Fees Must Fall movements are illuminating. She is not infallible, but she is constantly aware of the fact that hers is one of many accounts, and her integrity is beyond reproach. Smuts finished her memoir shortly before her death in April last year. Her daughter, Julia Smuts Louw, guided the manuscript towards publication.

Karina M Szczurek: You became the custodian of your mother’s papers after her death. Please describe the process of the memoir’s publication under your curatorship.

Julia Smuts Louw: My mother had already been in preliminary discussions with Quivertree by the time of her death. I picked up the conversation as soon as I could, knowing that my mother had been happy with the relationship and the direction. By the time she passed away, there was a completed first draft, but it was quite different to the final version. My mother was very detail-orientated – a trait which can be a mixed blessing, as I know, having inherited it myself. Consequently, she had created quite an epic tome, which required some shortening and reorganising to make it readable for those who aren’t quite as devoted to the law as she was. It was, and remains, a book about the ideas and issues close to her heart, however. I am indebted to Angela Vogel as editor, and Jan-Jan Joubert as fact-checker and general Drawer of Hard Lines. In terms of my involvement, I became a sort of general project manager, making sure the edits made sense, overseeing picture research, writing the cover copy and press materials, collating the Festschrift tributes and so on.

KMS: The striking title was your choice. Did your mother have a different working title, and if yes, why did you choose the present one for the book?

JSL: Dene did have a couple of working titles in mind, but had not settled on the right choice. “Making a difference” was one idea. This came from one of her own speeches, and in honour of this thought I used the relevant quote at the beginning of the book: “There are two approaches to opposition lawmaking work: making a noise and making a difference.” As I told her when she was still around, I thought this title a bit generic when seen outside of the context of the quote, and not Google-friendly. “Patriots and parasites” was a title I had suggested to her soon after she had returned from a pilgrimage to the Raadsaal Museum in Bloemfontein, as well as the Vrouemonument, which she’d tied into a trip she was making for her school reunion at Oranje Meisieskool, very shortly before she died. The visit to the Raadsaal, in particular, left an impression on her – she had been doing a great deal of research into the constitution of the OFS, and she loved seeing the seat of those ideals (dubious though some of them might seem now) preserved so lovingly.

She told me about Emily Hobhouse’s famous speech, and mentioned that she was using one line in her book: “In this South Africa of ours, true patriotism lies in the unity of those who live in her and love her as opposed to those who live on her but out of her. The patriots and the parasites.”

I immediately said, “There’s your title.” Dene thought about it for a moment with a “hmmm”, before saying in her usual polite, but firm, manner, “No.”

That was the last time it came up before the book became mine to midwife. The publishers were still wondering about the title, and I mentioned the idea that had been vetoed. They, and everyone else who heard it, were convinced it was a winner. I remained hesitant about it until I had a dream one night while copy-editing the book, in which Dene said it was okay with her. I felt at peace with it after that. I do think it’s the right title. I used the Hobhouse quote at the beginning of the book, too.

KMS: This is an extremely timely book for many reasons. In your contribution to the Festschrift at the end of Patriots & parasites, you quote Voltaire: “We must cultivate our garden.” I believe that by engaging with this publication, we as readers can do just that, with Dene Smuts pointing the way. What do you think this book can contribute to current socio-political debates in South Africa?

The book is unavoidably an analysis of what has gone wrong in South Africa, more than it is a celebration of halcyon days gone by. It would have been impossible to witness all that my mother witnessed, with the truly staggering insight that she had, over so many years, without acknowledging that South Africa, her great love, had become a disappointment to those who had worked so hard to safeguard it from the many obvious pitfalls of African democracies.

Dene locates the starting points of those foundational flaws, and traces the growth and widening of those cracks across the many fronts on which she battled them, in a way that few others could have done. She really did have a front row seat (or a front line position, as may be a more accurate metaphor) for the entire span of the “Transition Era”. And the big picture view of the present that this affords one is startling. Everything from the current parlous state of the SABC, to the misdirected anger of the Fees Must Fall protesters (“Mbeki's spiritual children”, by her lights), can be traced back in one way or another to the same handful of people, grudges and ambitions. The other, more positive conclusion to be drawn from the book is the integrity of the Constitution. It has been put to the test in the last year, and I know she would be proud to see it still proving our saving grace.

KMS: You quote Martin Versfeld and compare your mother to a willow. Please elaborate.

JSL: The line, which I first heard when my Aunt Helene quoted it at Dene’s funeral, is very whimsical and yet very moving. Versfeld says: “We think that the wind does something to the willow, forgetting what the willow does to the wind.” Helene was, in part, evoking the willow tree we spent many hours lounging under at my grandmother’s home in Bloemfontein. But with reference to Dene, it made me think of the two philosophical views of how [political] history unfolds: the one school of thought is that history shapes the individual, and that great individuals emerge from within the zeitgeist, to lead it or shape it (“Cometh the hour, cometh the man,” as they say).  The other is the idea that the individual can push against a prevailing grand narrative or value system, and take the initiative, often at great pain and cost, to shape history. This second idea, to me, fits my mother better: as a woman of her time, as an Afrikaans person of her time, and even as an MP of her time, she never bent with the breeze – she was “what the willow does to the wind”.

KMS: Patriots & parasites is a memoir, but one has to read very carefully between the lines to get glimpses of Dene Smuts, the private person. In the Festschrift, Jeremy Gauntlett mentions your mother’s “portable spine”, which she lent out to people weaker than herself. What other qualities would you like your mother to be remembered by, not only as a politician, but as a woman, a mother and a writer?

JSL: Jeremy brilliantly encapsulated a trait that many others recollected in connection to Dene – her courage and her refusal to back down on matters of principle. As Tony Leon put it, she seemed to follow the Biblical Esther's lead: “Kom ek om, so kom ek om” (If I perish, then I perish). This quality certainly shines through the book. What doesn’t come across as well, is her warmth and compassion – something many of her close circle, and even her acquaintances, have recalled. I think she may have felt that drawing attention to this and other qualities, like her sense of humour, would have been immodest. She was also someone who valued her privacy, and who strove to keep her personal and public lives apart. So there is nothing of her devotion to my brother and myself, or to her extended family. I don't think one even really gets a sense of how devoted she was to her work – of how far beyond the call of duty she would go in order to try and prevent unsound laws from being passed. When people asked me why my mother never remarried, I used to say she was married to South Africa. It was only half in jest.

KMS: You are a writer, yourself. What is next for you?

JSL: I’m enjoying screenwriting at the moment, and am working on an animated feature, The crash, as well as an animated short about autism, Sam the hedgehog. I have a novel manuscript that was my Master’s thesis, as you know, which I put away a long while ago, but I’m going to dust it off in 2017 – that was my New Year’s resolution!

KMS: Are there any other texts among your mother’s papers you are thinking of publishing?

JSL: If there’s an appetite for it, I might consider an author’s edition of the Patriots & parasites manuscript, as much had to be cut. I’d also like to do it in translation (Afrikaans) at some point. Other than that, I’m putting together tributes and stories as a collection for the family, but that’s about it.