“We were often surprised and delighted by how accepting the reviewers were of the more challenging storylines – and how collaboratively they approached these tougher topics in order to help us find the most appropriate way to include them in the series.”

My better world is a 55-episode life skills series that follows the adventures of six African teens as they navigate the complex challenges of school, family and friendship. It is the only fully African-produced project in its category, produced by Fundi Films in collaboration with Johannesburg-based Maan Creative for Impact(Ed), formerly Discovery Learning Alliance.

Cliffordene Norton chats to Chris Morgan, founder and creative director of Fundi Films, and the series producer of My better world. 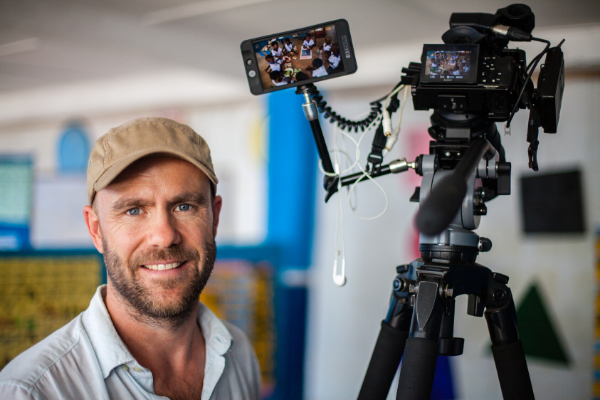 My better world was selected for competition at the 2020 Annecy International Animation Film Festival. Congratulations! What is the inspiration behind this series?

As Fundi Films, we had been producing documentaries for Impact(Ed) International (formerly called Discovery Learning Alliance), a non-profit created by the Discovery Channel. These documentaries have been used to improve education in thousands of low-resource schools across Africa. Most recently, we had made a film called The rights of the child with Maan Creative (Johannesburg), which used a mixture of stop-motion animation and documentary to teach youth audiences about their human rights.

The film was a hit with our key audience of young people and gained a lot of positive attention internationally after the United Nations recognised it with an award for a film that “best exemplifies the ideals and goals of the United Nations”.

Impact(Ed) International then came to us with a really exciting life skills curriculum, called “My better world”, which had been developed by Camfed to help young people, especially girls, stay in school and achieve their potential. The course was being taught in schools in eastern and southern Africa and was having a very positive impact. With this curriculum as our inspiration, we took on the challenge to bring its lessons to a much wider audience through television.

The series follows the adventures of six African teenagers. Tell us more about these teenagers. Who inspired them? How was each created?

Firstly, Impact(Ed) helped us conduct workshops with educators and young people in Ghana, Nigeria, Kenya and Tanzania, where we spent weeks listening to what interested our young audience, hearing about their lives and brainstorming ideas for storylines that resonated with them.

Then, together with Michael Clark and his amazing team from Maan Creative, we developed a group of six friends: Abi, Amina, Yusuf, Rosa, Freddie and Grace, who would be at the heart of the series. 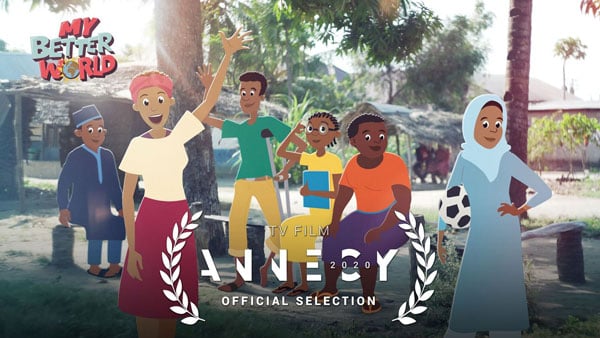 It was important to have real diversity in our characters so that the series could work in different parts of our continent. We reviewed each stage of development with teams in Ghana, Nigeria and Kenya – these same reviewers guided our script-writing process.

The format we finally agreed on was 55 seven-minute episodes, with each episode being a self-contained story focusing on an issue or challenge faced by one of the six friends. This format is ideal, because it allows the series to be packaged as short, stand-alone “mini-episodes” for eventual digital distribution or as 30-minute broadcasts for TV. Impact(Ed) is also distributing the series through DVDs to the schools they work in across Kenya, Ghana and Nigeria.

How do you balance education and entertainment?

Our writing team was truly pan-African – South African, Rwandan, Tanzanian and Kenyan – and it was their job to make each episode entertaining but also relevant to the theme of that episode. We wanted our viewers to enjoy the series and not feel like they are being lectured to. To connect the animated characters and their stories to the reality surrounding our audience, we also decided to include a two-minute mini-documentary in each episode. These feature real role models from across our continent, from the first female commercial pilot in northern Nigeria to a young woman boxer and entrepreneur from Hillbrow, Johannesburg. We ended up filming the documentaries in seven different African countries, which in itself was a huge adventure.

My better world tackles topics like child marriage. How do you ensure it strikes the right tone?

We had heard from our young audience that they wanted real stories that reflected the true challenges they face. We couldn’t, and didn’t want to, shy away from challenging topics like early marriage, harassment and even female genital mutilation. That said, we also didn’t want to oversimplify these stories.

For example, Abi, our lead character, has an uncle who reappears many times in the series to put pressure on Abi’s mother to arrange a marriage for her daughter. In this way, we could show different ways in which Abi confronts and overcomes this challenge – giving our viewers different tools they can use to advocate for themselves in their lives.

Our review committees in Ghana, Nigeria and Kenya, which include local community members and educators, also helped us determine how far we could go with stories. Ultimately, we wanted these films to be accepted and used by schools, so they had to be acceptable to the relevant authorities. But we were often surprised and delighted by how accepting the reviewers were of the more challenging storylines – and how collaboratively they approached these tougher topics in order to help us find the most appropriate way to include them in the series. 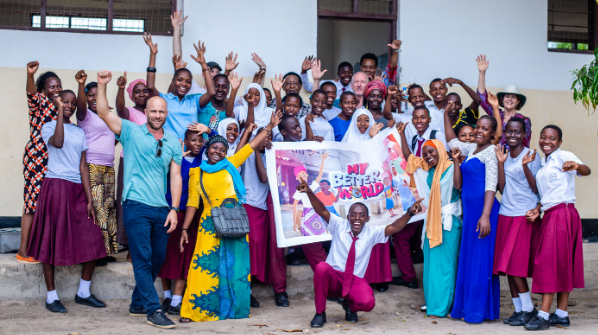 What were the biggest obstacles you faced with this project?

The sheer scale of the series was the most daunting part of the project. It was basically like making four full-length animated feature films back to back – and throwing in 55 short documentaries on top of that!

We had teams working in seven different countries, so we became masters of digital collaboration before the rest of the world was forced to by lockdown.

“Our writing team was truly pan-African – South African, Rwandan, Tanzanian and Kenyan – and it was their job to make each episode entertaining but also relevant to the theme of that episode. We wanted our viewers to enjoy the series and not feel like they are being lectured to.”

The biggest achievement was the work done by Maan Creative in bringing the animation to life. It was Mic Clark’s idea to use real video backgrounds with 2D animated characters, and it really works so well.

We employed up to 35 South African animators for two years, and their amazing work was recognised with an Annecy Animation Festival nomination in June this year, as well as two Telly Awards – including a Gold Telly for Use of Animation. The Annecy Festival is basically like the Oscars for animators, and to have our series in the same category as the BBC’s flagship Christmas movie and David Fincher’s Netflix series was a real honour.

As COVID hit and lockdown was imposed in many countries, Impact(Ed) wanted to reach as many young people stuck at home as it could with My better world’s stories. We assessed the risks in recording new storylines, and at that stage we decided we couldn’t take the chance of bringing artists into the studio and risk spreading the virus.

We challenged ourselves to edit the existing storylines with lots of creative use of sound design to make them work on radio as well as they do on TV. I think we just about did it. The series has been produced in English, Hausa, Somali and Swahili – so, actually, we had to edit 220 episodes in about four weeks. It kept us busy during lockdown!

The episodes are already being broadcast on community radio stations, like Wajir Community Radio in northern Kenya and Radio Tamale in northern Ghana. Impact(Ed) is also making them freely available in support of educational radio programming efforts at a national level in Ghana, Kenya and Nigeria aimed at keeping out-of-school learners engaged.

What do you still hope to achieve with this project?

We’ve broadcast in only two countries (Kenya and Nigeria) so far, so the journey is just beginning. The series was shown on Citizen TV in Kenya, and quickly became the most popular kids’ show on Saturday mornings, with an average of two million viewers per episode.

A week ago, we began broadcasting on Arewa24, which is the leading Hausa language channel in northern Nigeria, reaching over 80 million households across the Sahel region.

We hope many countries will soon get to see My better world.

Where can viewers watch this series?

The Hausa version of the series is currently being broadcast on Arewa24 in Nigeria (and reaching audiences in Niger, Chad and Cameroon) at 5:30 pm on Saturdays, and re-aired at 8:00 am on Sundays and 5:30 pm on Tuesdays. You can follow the series on social media for updates on when it’ll be shown in other countries. Follow it on Facebook and Instagram @mybetterworldshow.