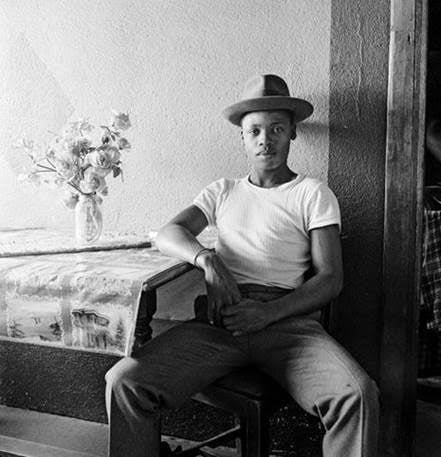 On “Young man at home 1972”
In memoriam David Goldblatt

Time to part with what I’ve gleaned,
pick your favourite, he said,
I’ll print it, frame it, bring it round.
He knew that as the hart1 about to falter,
I longed for waterfalls. And so from
all the monochromes I chose this youth,
triangulated in a morning square
and posed, beyond about-faces of might,
within a geometry of bounding curves
and latitudes, his finitude foretold
symmetrically, and by this symmetry
negated, a bottle holding flowers,
a phantom shade of hat. He would be
in his sixties now if fate treated him kindly,
he shall by far outlive the master
who was white.

The flow was stayed here by an augur,
one who herded into clarity the brave
and fragile beings of the bleak terrain
that was his land. He found them on
the pathways worn by settlers in a kloof
named Hell where children’s little arms
and legs whirled like broken windmills
in the deep. He placed a godforsaken
farmer’s wife against the crumbling plaster
of her home, flirting with the living daylight
by the door frame in a makeshift wall
beside a lightning crack. He pictured
in the netherworlds of station platforms,
slaves, in threadbare blankets, mournful
amongst trunks and bags, waiting
to go home, or tinned in nightmare’s
labour buses, shuttles weaving senselessness
from dark to dark. He shot the mugs
of those who had the whips, laws, banks,
guns, the shiny boot wax of bureaucracy,
who owned the mines and the opinions,
who trained their brows to give off
scorn while mouthing muffled
psalms to flags.

From all of these I chose this boy to keep
my faith while Goldblatt had a crate with
all his negatives shipped out the country.
For the insurrection we had coming, came,
and vengeful youngsters started burning
what they hated most, paintings, prints,
the record left by conquerors.
The artist is not one of those (we think),
yet this one knew that rancour targets archives
first, galleries, libraries, museums, and milks
subservience from their curators, so
he would not take another chance, would
not risk to lose all samples of a world
disconsonant, condensed, specific,
yet exemplary which he deemed more
telling but less recognized by those
who want their stories straight.
Here was a case in point, a young man
likely to be labelled “victim of oppressive
forces”, but who clearly would have
none of it. I hung him up as pantocrator
above my writing desk from where
he can survey the earth, its clouds
and trees and rivers, its peoples,
for what, till now, they have
been worth.

He sits for ever self-aligned from limb
to limb to streaming light, to chair, lintel,
table, his eyes two mirrors of a photographic
split intention, one hazily oneiric, the other
fierce in a cyclopic stare. The short-sleeved
vest is blessed in every fold over the lift
of fledgling shoulders, the hint of muscled
chest, the legs relaxed in their display
of ironed centre creases. With elbow
cocked, the forearm, rested like a king’s,
instils into a length of tablecloth the fact
of its belonging to this house. The hanging
wrist is single-bangled, the dangling fingers
of the right hand fastened in a grasp
of self that casually both states and shields
the flannelled crotch, the veins are sculpted
by the pulse of rising generations, and
the hat, the first one to be owned,
perhaps, is borne like haloed antlers,
like a crown of slowly hatching
thoughts above the still plump face,
the lips a little shy but silently
insisting, this, no more,
no less, is I. 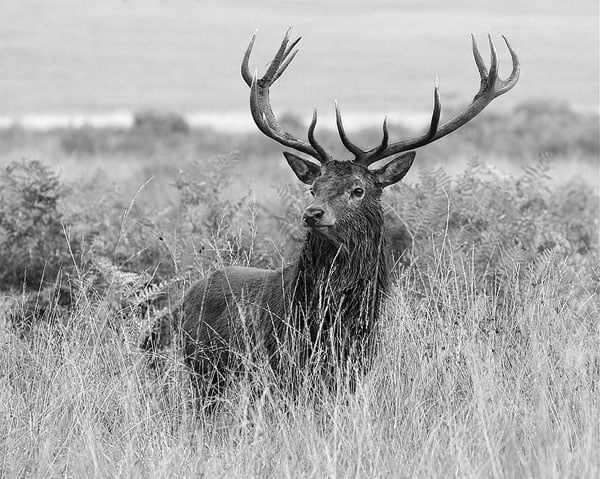