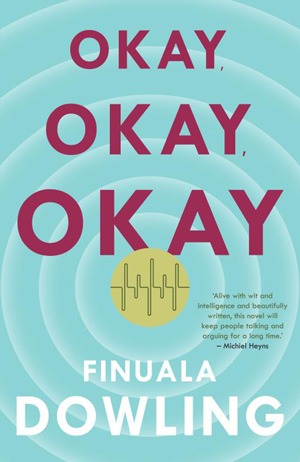 It’s taken me a long time to complete this book, through no fault of the author, but rather because of the circumstances of my life these past months. When I finally settled down to read the novel by an author I admire enormously, I was well rewarded. The novel is what screenwriters would refer to as a multiple-protagonist story, where characters share similar underlying motivations but follow their own personal paths. Same theme, different journeys is the phrase used to describe these narratives in scripts, as scriptwriting guru Linda Aronson would say. In this novel, the characters have the deeply human need to make their lives count, to be important in the world or, if not in the world, to matter to at least one other person.

Dowling has created a storyline set in Cape Town where the fictional University of Adamastor is a pivot for many of its characters.

The phrase okay, okay, okay is normally used when someone is trying to reassure and calm another person down. I believe the title of the book is an affirmation by the author to the reader, as well as to the many characters who populate this book, to reassure them that in spite of the apparent chaos of their lives, everything will be okay in the end.

The character I relate to the most in the novel is Miriam Landor, married to English professor Simon Landor, and mother to Cicely and a son by proxy, Loyiso. She is a full-time mother and wife and spends her days ferrying children around, shopping for groceries for yet another of Simon’s collegial dinners, doing endless domestic chores and trying not to worry about her racing heart. Her heart palpitates at the slightest exertion, but her husband and the doctor regard her concerns as those of a hypochondriac. In spite of the busyness of her daily routine, all Miriam really wants to do is focus on her master’s thesis, which is an investigation into the life and works of Olive Schreiner, who died before her most important work was published. Amid her chaotic to-do list, Miriam makes random stabs at her thesis. She even manages to see her supervisor occasionally. Her supervisor, Lori, serves up strong critique, but in one rare moment, she uses the word exceptional in relation to Miriam’s work. Miriam’s retired old friend, Roland, turns up regularly to “kidnap” her to insist she has fun in her otherwise duty-driven life. However, as most women with commitments know, she has to pay the consequences of not being on top of her duties constantly. A passage which sums up her story is the following:

Miriam … tried to focus on the tomatoes in the grill pan. But her mind was a vagrant. If she had forty minutes to herself today, or an hour, she could write down her thoughts …. But could she hang on to these ragged thoughts till her moment alone came? It was so hard working like this, being interrupted all the time, never having a long stretch of pure silence: no doorbell, no telephone, no “Miriam?”, no “Mummy”. (139)

The paragraph above sums up for me the life of a woman writer who has to work while being the mainstay of a family. Even Jane Austen mentioned in her diaries how she wrote her novels in short bursts, hiding her work under a book when others came into the room, trying to find continuity between family interruptions.

Miriam’s friend Roland is the epitome of the gentle man. A retired academic, he volunteers at the Centre for Vulnerable Students to ease the burdens of those students who are less fortunate than others. He also reminds Miriam that she has to make a life of her own. It is almost inevitable that he, a noble character, gets caught in the crossfire of student anger when protests break out.

Then there is Vida, an expert sound engineer for large-scale musical productions. An Amazon of a woman, she makes Wonder Woman look insipid. After losing a lucrative international contract to someone much younger and very inexperienced, she finds herself stuck at home without a job. The humiliation of this would make a lesser being lose hope, but Vida uses her anger to keep herself busy. She becomes even more active in the ratepayers’ committee of her apartment building and spends hours walking her beloved dog, Trinculo (soon to be joined by another animal from the shelter), on the beach. Her evenings are generally spent drinking copious amounts of wine, and she is always keen to engage in an interlude with an often much younger lover. Her motto is: “The problem with the world is that everybody is a few drinks behind.” As she resorts to working on inauspicious local productions, Vida is brought into the orbit of Cicely, Miriam’s daughter, with far-reaching effects.

Cicely’s narrative strand involves a few too many spoilers, but suffice to say that the young woman makes her mother, Miriam, proud.

Dowling also delves into the world of Simon Landor, Miriam’s husband. His journey from the hallowed halls of academia as once professor of English, into upper management as a university administrator, follows his dismay at the servitude of his new position, in spite of the better salary and apparent prestige. No longer able to languish in the joys of belles-lettres, he finds that his new job turns into little more than a public relations exercise, defending university management for the neglect of students in need when a crisis erupts and the students protest. In spite of his scrupulous attention to detail and honourable motivations, he becomes the scapegoat for mistakes he has had no hand in creating. At the end of the novel, he has to reassess the actions of his life from as far back as he can remember.

Another story strand is that of a young academic from the Northern Province, Viwe, trying to negotiate his career through the political hotbed which passes for Adamastor’s staff body. Personal ambitions, political agendas and often incompetence place huge obstacles along his path. With a huge student debt to pay off, and his degree unfinished, Viwe does everything he can to get ahead, even chores like picking up Thembani, the illustrious Professor Sithobe’s grandson, from his expensive private school. His most telling phrase explains his motivations: “You didn’t want to do it, but sometimes you have to be the inferior cur that lies with its nose on its paws, close to the ground, salaaming before the top dog.”

Viwe’s obsession with his own career trajectory leads him to overlook the needs of those closest to him, especially his younger sister, Siphokazi, a student at Adamastor. Siphokazi and her best friend, Ayanda, both receive assisted passes at the end of their second year and lose their places in the university residence, with disastrous results. Siphokazi is too embarrassed to tell her parents or even her brother, Viwe, and he is oblivious to her distress.

Loyiso, who is in effect Miriam and Simon’s son, is another important character in the intricate weave of the novel. His mother was employed by the Landors as a much-loved domestic worker, but she left Loyiso to be brought up with them in an environment of privilege which she couldn’t offer her son. Loyiso’s private school tendencies are sharply reassessed when he is brought face to face with apparent injustices committed by the university, especially when the person shouldering the blame for the injustices is his stepfather, Simon Landor. For the first time, Loyiso has to decide where his allegiances lie.

There are many other characters who are part of the web woven by Dowling in this expansive narrative. In the end, the focus returns to the main characters, who are brought to sharp resolutions by the turn of events in their lives. The novel is satisfying and engrossing, while embracing topical issues similar to the FeesMustFall protests and a colonial university’s inability to deal with a student body demanding the fall of colonialism. Through the turbulence which besets every character’s life, Dowling reassures her characters as well as her readers: “Okay, okay, okay.” Everything will be okay in the end. This reassurance is much appreciated by the reader as well, especially during a time when nothing is certain in a world beset by an international pandemic.