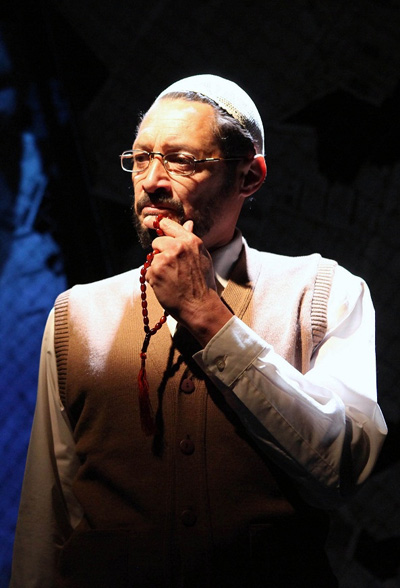 It was with great relief that I slid into my seat at a National Arts Festival production of Mike van Graan’s Brothers in Blood this morning. After days of (mostly, but I flatter myself) futile attempts at deciphering (mostly, but I flatter the producers) incomprehensible interpretive dance showcases and experimental student theatre, I was fairly certain that here I was on stable ground.

Van Graan, veteran Cape Town-based playwright, writer and arts activist, turns on its head the perception that theatre has to be a bum-numbing, purposefully obtuse affair in order to be intelligent. Brothers in Blood, winner of the 2009 Naledi Award for the Best New South African play produced, deals with the very immediate issues of racial and religious intolerance in South Africa in a way that is accessible to anyone with a pulse. By this I do not mean to suggest that Van Graan’s offerings are to be labelled 7de Laan-for-the-stage productions. There is no condescension here.

The play interrogates the ways in which the lives of four very different people from the Muslim, Christian and Jewish faiths intersect and sometimes violently collide. Drawing on a shameful history of xenophobic violence in South Africa and set against the background of PAGAD activities in the ‘90s, Brothers in Blood asks the question, “How far will decent, law-abiding people go to protect their own when faced with a seemingly hostile other?”

As the title suggests, the characters, so different in terms of faith, appearance and socio-economic positions, are bound together by blood – the spilt blood of loved ones lost to hatred, resentment, racial prejudice and paranoia. The slippery boundaries between victim and perpetrator, fanaticism and faith, and culpability and virtue are crossed and recrossed in a fast-paced, powerful and engaging manner.

There are no heroes and villains here, Van Graan seems to be saying (and thanks to a linear narrative I am fairly certain of this). We are all victims. We are all complicit in the violent imposition of racial stereotypes on others. We are the same.