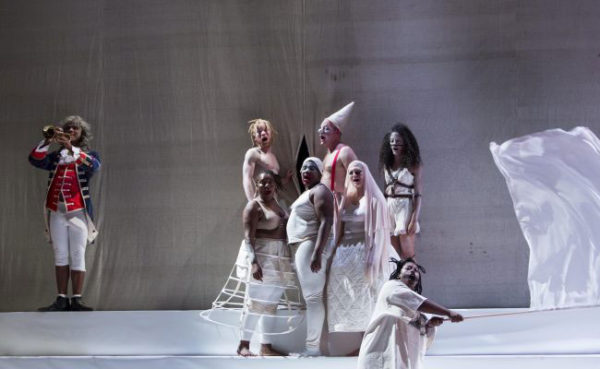 As a ticket-holder, you know from the outset this is going to be a very different theatre experience, in large part because Jaco Bouwer’s name is attached. Also, here, the setting is distinctly clinical: white-covered chairs, a white-washed stage. The amphitheatre style of the Baxter’s Flipside, in this context, recalls the oil paintings of gawkish, 19th century medical halls, where hundreds of disbelieving eyeballs pour out their stare on a body, often – thankfully – dead. Add to the scene, seemingly not yet started, a stage curtain – backlit plastic sheeting behind which human shapes move silently, curiously – and the sentiment is more than a mere tone of unease. It’s decidedly ghoulish.

Bouwer’s interpretation of the Peter Weiss play, Marat/Sade, is, however, anything but a chaotic, raving period piece. It is scalpel-sharp commentary on power, action, classism, liberalism and ideology at the core of our society, and especially in the South African context. It was relevant as one of the plays to open the Market Theatre in Johannesburg in 1976 and, as we know, remains especially relevant now. Early on, already, you realise this deserves an audience far, far wider than the title is likely to achieve.

The play was written in 1963, and titled The persecution and assassination of Jean-Paul Marat as performed by the inmates of the asylum of Charenton under the direction of the Marquis de Sade – Marat/Sade for short.

Weiss, who died in 1982, experienced the traumas of Europe – the machinations of power and the results of its abuse – up close. His formative years were spent in Germany, London and Czechoslovakia, before he finally settled in Stockholm. They shaped his political views on crises in places like Cuba and Vietnam, and inhabited every work he produced.

In the context of Marat/Sade, it matters little who Sade and Marat were, but, as always, it makes for a sumptuously textured experience with a little extra reading. For starters, the Marquis de Sade was the 18th century writer and intellectual with an obsession with sex, violence and pain, and who spent most of his life in prisons and a lunatic asylum.

Sade’s peer in France at the time of the revolution, Jean-Paul Marat, was a vocal politician and writer who was later assassinated in his bath by one Charlotte Corday.

The characters of Sade, Marat and Corday all feature in Weiss’s tale, set in an asylum in 1808. Mncedisi Shabangu’s Sade is a cold and chilling foil for the zealous, but deluded, Marat of Charlton George. Between them lies destiny, in the shape of hapless Charlotte Corday, stark in her crimson dress and played by the truly magnetic Tinarie van Wyk Loots.

Add to this a cast with a mesmerising performance, and that alone is reason to buy a ticket.

The tale unfolds with the showing of a play being directed by Sade, who wears a black coat and is seated on the stage, his back to the audience. It is therapy, nothing to be afraid of, the audience is told in a brief introduction. By degrees, however, the reins on the lunatics fall slack. Occasionally, guards storm in to regain control, but Sade will have no interference of his merciless puppetry.

This isn’t an easy watch. One is intensely aware of one’s own imperfect complicity, and constantly reminded of it jarringly as the occasional performer tears through that imaginary wall at the edge of the stage, and bounds – wild-eyed and tongue flailing – over the aisles.

But it’s impossible to look away. The lunatics are those people over there, we think to ourselves; we tolerate their blasphemies and are reassured by the suit-and-tied asylum director who sits among us in the amphitheatre. In the end, we are completely absorbed, lost between the lines of our world and theirs, the French revolution and the one happening in our minds. Our faith in order and protection is finally shattered, and we are faced with the truth that clings long after the theatre has fallen dark.