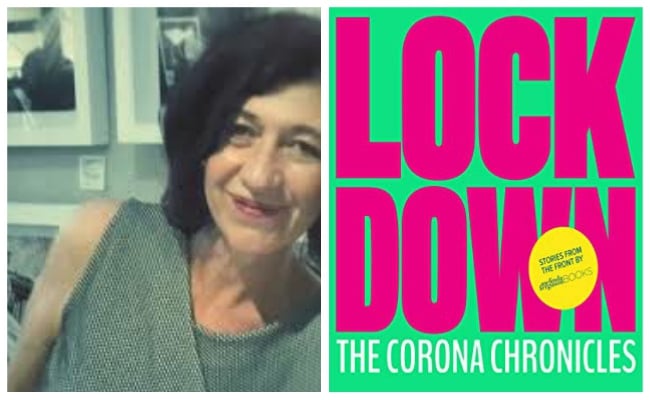 Melinda Ferguson put together Lockdown: The corona chronicles in just a few days. She tells Naomi Meyer about this book and also talks about these unprecedented times.

Melinda, I notice a press release in my inbox about the “fastest book in history, written in seven days by seventeen different authors”. Would you please elaborate?

On 24 March, three days before South Africa hurtled into lockdown, one of my authors, Pumla Dineo Gqola, casually – as a joke – mentioned on our authors’ WhatsApp group that one day we should all write a coronavirus book. She said she was joking. I took her seriously. Within minutes, I sent a voice note giving 17 writers (including myself) a 10-day deadline. Within days, this had shifted to seven days, then six – then five.

Everyone agreed. Not sure how that happened. The time was so intense and crazy that none of us really had a choice. While all of us were locked down in our homes, our muses arrived – fingers flew across keyboards. And, although authors resisted, wailed, bitched and moaned, they finally surrendered and complied. And on Monday, 30 March, seven days after the idea was birthed, I edited through the night, and the book went in for layout and e-conversion.

I would like to believe that Lockdown: The corona chronicles is the fastest-written book in history, written in seven days by 17 authors – and published as an e-book within three days of delivery. It’s been madness. It’s been exhilarating. It’s been corona-intense.

In this country, we are at the very beginning of lockdown and the very beginning of the outbreak of this (not so) novel virus, Covid-19. How is it possible to write about this historic time during this unprecedented time? Is there enough space and distance between what is happening and the authors? (Is this necessary?)

I think things have happened so quickly, our world has changed so suddenly, that we were and probably still are in a state of shock; I call it present traumatic stress. But, of course, during such intense and frightening times, there has been plenty of material to process, to give us writers an amazing amount to write about, as it’s all unfolding, not waiting until after it’s all been sewn up: the panic, the pandemonium, the fears, the nostalgia for normalcy, the absurdity – so much.

This is the time when writers should be writing. And, as a publisher, as the state of disaster was declared, all my traditional hard copy books were either locked down in a warehouse, locked up in a bookstore or waiting to go to print. So, what could I do? Lie down and die? Become irrelevant? Instead, I decided to embrace opportunity, to create a platform for authors who were feeling lost and useless, like I was, and, instead of sitting around moaning and groaning, we decided to create something, a record of unprecedented times which will one day be regarded as historic. I am so excited that we have embraced a creative way forward instead of being subsumed by negativity and resistance.

Panic, pandemic, pandemonium. So much background noise all the time. How does one even begin to make sense of all of this? What is your take on the events happening worldwide right now?

Well, initially, I was freaked out by the sudden changes, the feeling that my life and all my plans had disappeared and evaporated overnight. But it is in times of chaos and confusion that there is opportunity to reset things and change. I think this virus is giving us an opportunity to dig deep and find inner resources that we were not aware of. It’s a very stressful and challenging time, and the world as we have known it is disappearing before our eyes, so we have to hold on and find our way through this fog and not give up. I think those who manage to navigate through this without falling apart will be much stronger on the other side, post-corona.

Do you think everything will just return to normal again – ever? And what do you think will happen after lockdown?

No. I don’t think we are ever going to go back to the “unconscious normal” we were in just a few weeks ago. I think that after lockdown, the world and South Africa will, in many ways, be in pieces; in many ways, the systems we knew will be broken, and we will all have to readjust and start again. I think it will be a bit like we were in some kind of war that has left a wake of destruction – starvation, disease, death and much suffering. But I also feel – rather, I hope – that human beings might be more conscious of the disastrous role we have played in the careless and, at times, wanton destruction of our planet and all its living beings. I hope that, post-corona, we as a human race will be less greedy and inhumane. Although I think I might be being a little idealistic – we are in for some very difficult times.