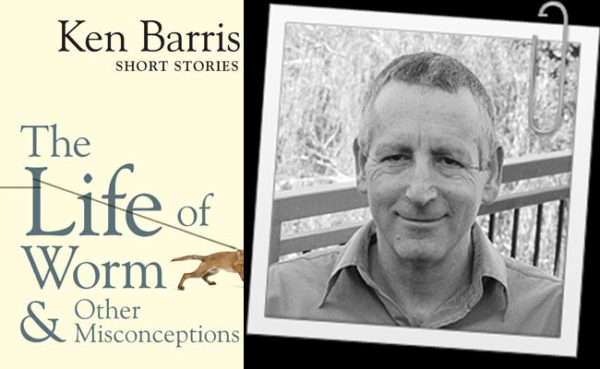 I cannot remember when last I took so much pleasure from a short-story collection. Expect the unexpected: flying rooms, mustard reviews, book timeshare plans, the sense of beauty, or a talking baboon.

The life of Worm & other misconceptions by Ken Barris offers a beautiful range of tone. Readers might be relieved to learn that “there are many ways to cook a pterodactyl”, even if you find yourself in a flying room like the narrator of Atmosphere. Two long-term friends hike the Klipspringer Trail in Puff adder. Although there is nothing funny about the outcome of the story, I loved the dry humour of its unfolding. In the allegorical Cat got your tongue, guilt and unspeakable acts are articulated in silence and gestures.

The collection opens with a piece about writing itself. The narrator of To see the mountain attends a writing workshop. He is struggling to write. Patience, one of the other workshop participants, tackles the serious issue of patriarchy in her work. They both attempt to see the mist-veiled mountain from the place where they are staying. Each writer has a unique strategy for how to accomplish the task. For the narrator, the act of imaging the local geography and a hike up the mountain are enough to unlock his creativity. Patience channels her energies differently.

To see the mountain is not the only self-reflective story on the art of writing. The mustard review exposes how writers are often required to know everything about everything, even something as bizarre as how to review a jar of mustard. Local authors reading The Grand Parade will be forgiven for laughing out loud when they encounter the following sentence at the bottom of the first page of the story: “He was going to become a writer, and so create his own employment.” You might find yourself craving whisky like the wannabe author of the story, who sets up shop on the Grand Parade and realises that “it took more resolve to be a writer than he had ever imagined”. Especially when he is a white, middle-aged, unemployed man in Cape Town, who feels he has to bellow “at the top of his lungs” at another writer and chase him away to feel his own possibility of becoming “a great writer”. In Really into timeshare, people can’t afford books, so even the great writers have to be timeshared, and if you are lucky, you can win “three free pages of Horseman, Mike Nicol’s magnificent novel”. The company offering the literature timesharing has “hundreds of authors on our books!” One should not be laughing, but I couldn’t help myself. One chuckles, and cringes, reading The quick brown fox, in which Jay Barrell experiments with fiction and self-publishing, but also has a gift for turning “things into a kind of plastic”, can fly and is the only one who can save humanity from an alien invasion.

A few of the stories address the ever-present sense of shifting history, sometimes quite subtly, as in the following phrase: “inner life of oak trees, their weakness, their corruption, the bloated mass of their history”, or a statement like “when I was a young man, there were no black boys and white girls lying on green grass”. However, The Olive Schreiner stall is anything but subtle. It is told by a corpse, the victim of necklacing: “Come closer. Now it is the witching hour. Bitter flames still licks at the circle of torched rubber. My ashes are perfectly still, sensitive enough to measure all that passes. In this dark globe families are slaughtered by grenade, by automatic gunfire. Breadwinners are slashed open, children and women are raped each minute, little boys’ cocks are cut off. How can one possibly exaggerate? The flame dies out, but wind licks over my corpse and slowly, the world turns” (my emphasis).

In Five minutes, perception of time is relative: “A great deal happens in five minutes.” Especially when you suffer from dementia and a handful of minutes is all you have, when “all time is compressed into the most recent”. The middle-aged David treats his senile mother to tea in the Company Gardens, where the passing centuries are recorded in the cultivated space around them, as well as in the Rhodes statue and the teenagers of different skin colours making out. Memory is unreliable and fleeting; everything changes. The five minutes of the title can be a lifetime, or just enough for an eruption of violence – a stabbing outside the gardens’ wall, to be registered and dismissed as insignificant. At other times, some thoughts are “thought slowly … however misbegotten” (Sleep faster, we need the pillows).

In A sense of beauty, K realises “that he had been affected by a sense of beauty”, which then vanishes: “It was a relief to feel his old numbness, to sink back into a world that made no special demands.” Beauty returns with violence when K and Eva, his wife, are apart for several weeks and she comes back with a gift for him, while he has nothing to offer but a rat he’d killed before her arrival. The kill and the manner in which Eva responds to K’s eventually forced gift makes him appreciate the nature of beauty.

Worm, of the collection’s titular story, is a dog (obviously!). His hyper-safety-conscious owner is constantly imagining the worst possible crime scenarios he could become victim of and how to protect himself against them. The dog is only a security measure. Affection-starved, Worm is unpredictable in his reactions to others. Tenderness unleashes his cuddly side. Released with hatred, he turns into a vicious killer.

In Poor William, a man walks into his kitchen to discover that a large male baboon has made himself at home there and is in the process of buttering a slice of bread. He introduces himself as William. The talking baboon decides to visit whenever he wishes. His host, Mr Harris, grows “accustomed to living under siege” and eventually accepts William as company: “He was an unsought, unwanted solution, offering relief from the boredom of my life in Cape Town.” When William is killed, at the memorial held for him, Mr Harris recognises the baboon nature of the fellow mourners around him.

One gets tired of people complaining that they do not want to publish short stories because they don’t sell and no one reads them. Instead, let me continue singing the praises of misconceptions, Ken Barris’s and all others. Barris will make you laugh, weep and think. Read The life of Worm & other misconceptions for the pure delight of experiencing the short story at its versatile best: take a flying room, add a saurian, and see where they might take you.