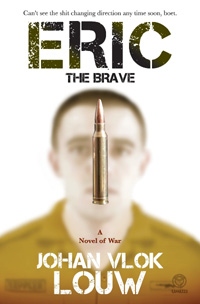 A platoon of conscripts guarding a remote outpost in the then South-West Africa (today’s Namibia) smoke, drink, drool over pictures of naked women. And size one another up …

It’s the anticipation, the sense that something dreadful is about to happen, must happen, that keeps readers turning the pages of Eric the Brave, shocked, almost, by the accuracy with which the writer recalls life “on the border”. He “paints” realistically, with short, accurate strokes of the brush. The picture that emerges is dominated by shades of brown. Army brown.

Then fate, if it is that, strikes: helicopters float down and scores of dead bodies are dragged from it. Eric and the other soldiers from his platoon are ordered to board some of the helicopters. The “big mama Pumas” take them even further north, to where the sh*t had apparently hit the fan in a big way.

Eric the Brave is not, as the title may suggest, an action story about an adventurous hero killing and mutilating in true Rambo style. Nor is it a nostalgia-driven story in which a soldier claims justification and sanctity for the war in which he fought so gallantly.

Johan Vlok Louw worked in banking, dug for gold in South Africa’s mines and studied fine art and design. Later on, he got sucked up in the timeshare business and entered the corporate world. 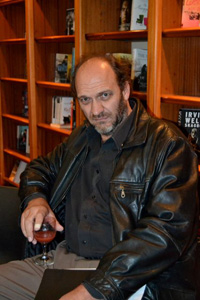 “I also sold vacuum cleaners,” he smirks, “but in my heart I have always been a writer. The ‘other stuff’ was only meant to keep food on the table.”

But not too long ago he started writing and painting full-time, supported by a wife who understands his passions.

It was time to tackle the boxes of manuscripts that had accumulated over many years (five novels and about thirty short stories, a lifetime’s work for most writers); to complete them and send them into the world. Eric the Brave was first. All in all, it took him twenty years to finish what would become his debut novel. Precious little of the first draft made it into the final manuscript.

During his own stint in South-West Africa Louw was “safely in the rear with the gear”. But he was close enough to the “real thing” for it to make a lasting impression on him as a young soldier.

“I guess it takes time for traumatic experiences to ripen in the psyche of writers and artists,” he explains. His voice is soft, but urgent and intense. “The Vietnam War is a good example. It took about fifteen years before a lot of what happened in Vietnam was ‘recreated’ by writers and film directors.

“Eric is about ‘the seed of Adam’ that hides in us all,” he continues, “our messed up birthright that makes it impossible for us to live in peace.”

Louw talks the way he writes: every word is meant to be said. He talks easily, but sparingly. “It’s about how quickly the ‘crossing-over point’ between the so-called normal and the absurd can be reached. It’s the devil that does it, it’s the sa-taan.”

Of course there is an “Eric” in a lot of women as well, but Louw admits he will never be able to write from a female point of view. “I simply can’t; I don’t have it in me.”

While reading Eric the Brave one often feels as if you are “reading” a painting, a still life which, in spite of its lack of colour, vibrates with energy and silent emotion: it should be no surprise that the writer is also an established and passionate artist.

“I paint contemporary work,” he explains. The expression in his eyes begs for understanding that an “abstract” painting is an extension of the artist’s soul, of what he or she feel and is.

And a surrealist writer, even though on the surface Eric the Brave seems almost upsettingly realistic?

“War is surrealistic. And writers and directors that find it easy to slip into the shared consciousness of humanity all find the same thing there: our sinful nature, maybe. They reconnect with all that’s gone before, and which is to come.”

He is already writing – or rather, rewriting – his next novel. “It’s a contemporary work, but the Border War is not yet out of my system. The universal truth that weaves itself through the next novel will be much the same. This eternal conflict, the fact that humankind has always been waging war against itself and maybe always will … It intrigues me; I cannot escape it.”

Indeed: war will have no purpose if it is easily forgotten by those who experience it in some way. But only a few are chosen to turn a thing of such horror into such beauty and gracefulness as is Eric the Brave.