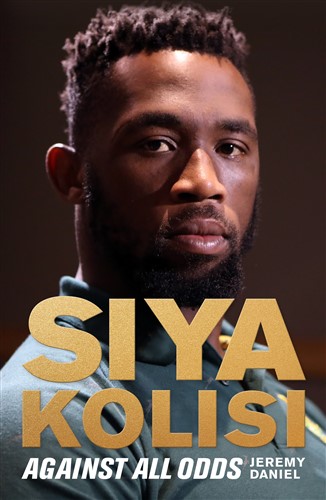 Hello Jeremy, you recently wrote a book about Siya Kolisi. Siya is very much in the news right now! Did you expect the Springboks to reach the finals of the Rugby World Cup this year? And are you interested in sports in general, and in rugby in particular?

All the rugby experts, coaches and players I spoke to for research were quietly confident that this team had something special and that Rassie was the right coach at the right time. I had a feeling we would do well, but I wasn't sure that we would go all the way. Now it's starting to feel like the fairy tale could really come true.

I'm interested in most sports and the drama around what it takes to make it to the top.

You are a writer and a musician, and you’ve recently written books for younger readers on South African sports heroes. What are the challenges and the joys of writing about sports heroes? And how do you do your research?

Writing these books has been a lot like detective work, especially when it comes to researching the heroes’ childhoods. You have to put the pieces together, check and double check and remember why your audiences are reading these books. It's a joy to go to schools and see the patriotism and the love for their heroes that the kids have. They really connect with South Africa’s sporting heroes who went to schools just like theirs.

Siya Kolisi has made history in the sense that he is the first black Springbok rugby captain. But what else can you tell me about Siya Kolisi and about who he is? And does colour indeed still need to play such a huge role in South African rugby?

For Siya, there was no Plan B. Rugby was it. It saved him at a time when he was desperate and in return he gave everything for the game. He's a straightforward, hardworking, generous guy. I don't think people realise that these guys at this level train six days a week, do press on their day off, travel, play and recover. There's not a lot of time for anything else.

Colour ... well, this is South Africa, so the colour question is always there. I think it's slowly normalising, but while society is so unbalanced along racial lines, it will remain a frame of reference for most people.

Do you think that Siya Kolisi could be a figure of reconciliation for South Africans, or do you think we should, as a nation, move away from this idea and instead focus on him as a remarkable rugby player? Maybe you could elaborate on the power that a sport like rugby can have on nation-building – or on dividing a nation.

I think he is a figure of reconciliation already. What he's achieved, where he came from, how he lives his life is all part of his story. He's not a flashy player, so many people underestimate his impact on the field. He's doing the hard work at the bottom of the ruck, putting in the grind while others get credit.

I think any sport that showcases us as a winning nation can contribute to nation-building. We need that winning feeling after so much bad news for so long. Rugby is not unique in that respect – it's just that we are doing really well at it at the moment.

What is your prediction for this weekend's rugby? And in general: What do you think is the way forward for the Springbok team?

I think it's going to be very close. I think we will have learned from how England dismantled the Kiwis. Both teams are going to be hurting after a long, gruelling tournament, so on the day ... it's going to be a few moments of brilliance that dictate the outcome. But destiny is on our side with this one!

Fresh off the press: Siya Kolisi: Against All Odds by Jeremy Daniel