The poet Sydda Essop’s book Karoo Kitchen (Quivertree Publications) needed a great deal more attention than it received when it was published a few years ago. It is like Bo-Kaap Kitchen (also by Quivertree): much more than just pretty photographs and an assortment of recipes.

It is also an anthropological journey into the heart of the Karoo and took years to research. This is a culinary and historical reference book that takes you into the hearts and homes of people like Lena Oktober, Karen du Preez and Francina “Aunt Siena” Nolusapho Blow.

Different people, dissimilar cultures, diverse backgrounds – but all with one thing in common: the food of the Karoo. 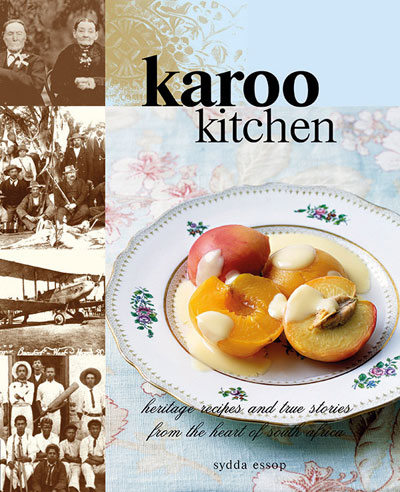 Karoo Kitchen was born in my grandmother’s Voortrekker kitchen with its huge black coal stove, long brown wooden table and brown painted kitchen cupboards with lino floors. The brown always used to remind me of the depressing greens and browns introduced by the Victorian era. It is in this kitchen that I was introduced to a cross-cultural fusion of tastes which stuck with me for the rest of my life; as a child I thought this is how most people ate!

This book is undoubtedly more than just a cookbook; it’s also an anthropological and historical narrative about the Karoo, its people, its food. It’s a timeless collector’s item. For readers in the dark, what is it about? What makes it so special?

It was never intended to be just a cook book, but rather a book about the importance of food as a survival tool; celebrating the culinary skills of the different cultures in the Karoo, their differences, socially and politically, which culminated, either naturally or unknowingly, into one of the healthiest, tastiest cuisines in the world.

It is the very first time in the history of our country that the role and contribution of our indigenous communities towards the formation of a unique food culture has been recognised, especially those women who were forced to or out of necessity had to cook in farm kitchens at an early age.

Moreover, it dispels the myth that Karoo cuisine was influenced exclusively by Europe and the colonials. It is also the first time that homage is paid to all the diverse cultures of the Great Karoo, the Cape and the slaves of the Indian archipelago for their contribution.

It would have been unfair and unjust to the cooks of the Great Karoo to portray them as mere cooks without acknowledging their contribution, passion, conviction, their personal stories of pain and triumphs, and most importantly, their contribution to the formation of this beautiful cuisine!

Karoo food has formed the basis of South African cuisine, coupled with the harshness and the beauty of the landscapes, and the infinite space giving fruition to their manner of storytelling and way of life.

Eating a good meal at least once a week has become the norm for most people in the Karoo. For the poor, it is Sunday lunch, the only meal where families and extended families can enjoy the occasion together and be grateful to those who provide.

For the rich it is an everyday occurrence. These are simple cooks and not celebrated chefs of the world, irrespective of colour or creed; they wholeheartedly succumb to the necessity of putting tasty food on the table for family or guests, even during times of hardship. 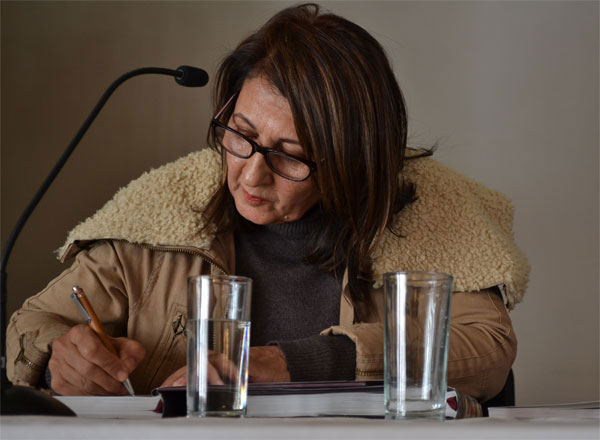 This book is incredibly well-researched; the detail and personal stories are exceptional. How long did you work on this book?

It took me almost five years of research, travel and interviews. With final drafts done and ready for publication, Craig Fraser and I did more trips to photograph everyone. I have gained so much knowledge, learned so much respect, and I think patience!

With the indigenous communities living in far-off places in the Great Karoo, it became a challenge to communicate with them because of the lack of telephones and cell phones. Capturing the information from my dictaphone at home and then driving back again and again to authenticate the interviews or substantiate the facts.

With the indigenous communities nothing is captured in written form, but oral tradition is the order of the day. Driving to and fro, alone, was the time when I could really consolidate my thoughts and strategies. It was soul-searching at the same time.

How did you find the people in the book?

At first finding it very challenging and almost frightening, I was ready to embark on my journey, but where to find my cooks? For quite a few months before I embarked on my journey of interviews I spoke to farmers and farm labourers at the supermarket I co-owned.

My positions as chairperson of the Beaufort West Museum and also my involvement with the gender programme of social development connected me to a few contacts within the different cultural communities.

Most importantly, it became an advert “by word of mouth”, or speaking to one person would lead to another. The church communities (die kerksusters) and of course the VLV (Vroue Landbou Vereniging) played a major role. I had countless meetings with them.

What is it about the Karoo, its food and people that grabbed your interest?

I was born in the Karoo and naturally for me this is the place I will always love and nurture until the end of time. About the Karoo: it’s the vastness, aridness, the dust storms and the amazing thunderstorms and the endless blue skies; even in winter it is very difficult to become depressed. Those beautiful, still summer evening skies with countless galaxies of stars, the sound of singing voices from home-based churches, and the hope and belief that God will solve everything. The communities are kind-hearted and warm, irrespective of their challenges, ready to hold a feast.

I was nurtured with good wholesome food as a child, but my obsession with food and what people eat made me fall in love with the region and its people. It was also the interest and the curiosity that urged me to explore how the rest of the Karoo eats.

We are an interesting people, thrown together many centuries ago to navigate our co-existence. Food became a necessity; it resulted in good, wholesome, delicious food which culminated in a unique food culture. I needed to embark on this journey to record it before it was too late, combined with the complexities of the region.

It’s their warmth, ready to please, the readiness to entertain and feast even under very difficult conditions.

The photography in itself is a work of art. Can you tell us more?

The old black-and-white photographs of the respective cooks in the book were their own family photographs they contributed. The Beaufort West Museum, Fransie Pienaar Museum and the family-owned Village Museum also contributed some very beautiful and historical photographs.

The museum manager and I took days to choose the relevant ones. The rest of the photographs were taken by Craig Fraser from Quivertree. The portrait photographs of the cooks are very beautiful; I have always believed that Craig painstakingly captured the inner beauty of the people in the book!

With a background of good food it’s difficult not to be interested in good, wholesome food. I initially thought, immediately after the completion of Karoo Kitchen, no more food thoughts and writing. Karoo Kitchen has become my conscience. It is always silently reminding me that food is what I know best. Food, people and stories haunt me all the time. I am always intrigued and excited about what people eat wherever I find myself.

I am disturbed by the fact that so few of us can afford to eat good, fresh wholesome food and the rest of the country has to rely on unhealthy options. The easiest way to communicate with people at a social event is to speak about food and share recipes.

In my family, especially the youngest generation, there is the absolute love for good food. As a family we entertain often among ourselves and ultimately, after the discussion of politics and the daily gossip, we naturally discuss food! My next book will be another food journey.

Why should readers, even if they don’t like recipe book, buy this book?

The book is aesthetically very beautiful. You have mentioned the anthropological value and the historical narrative of the book; I have a friend who loves food but is not interested in cooking or recipes. This is what she had to say: “I have always heard about this beautiful region, the Karoo. As a child I often travelled with my family on the N1 to Johannesburg and regarded the Karoo as God-forsaken.

“After reading the book, I fell in love with the people, the humbleness, their challenges and convictions: the photographs depicting the beautiful landscapes and the souls placed in it.

“I was impressed with the co-existence of the multi-cultural communities and their contribution to this wholesome cuisine, a cuisine that is being practised around the world. I fell in love with the heartfelt stories and their struggle to put food on the table irrespective of colour or class.

“It’s their passion and convictions that have impressed me the most, their realisation early in the past few centuries that the Karoo was their refuge and systematically and unknowingly perhaps formed this interdependence of diversity to survive with no bitterness.

“It’s an example to the rest of our politically turbulent world. I have never looked at food as a binding factor of diverse cultures, and Karoo Kitchen has forever changed my perception of food and outlook on life.

“The universality of the message of this book makes me believe that the world is full of Karoo Kitchens, ready to be discovered and conquer the narrative of love and co-existence.”

Sydda Essop studied at the Michaelis School of Fine Art at the University of Cape Town. During the 1980s she became an active member of Vakalisa, a community arts collective in the Western Cape. She also served as secretary of Wynberg Crisis, an organisation founded to assist and support parents whose children were charged with public violence during the State of Emergency in South Africa. In 1989 she contributed to an anthology of poetry, I Qabane Labantu: Poetry In The Emergency, compiled and edited by Hein Willemse and Ampie Coetzee. In 2003 Sydda founded the Karoo Gender Forum in the Central Karoo region to empower women and young girls, in collaboration with the Department of Social Development. In 2010 she contributed to another anthology of poetry, Nuwe Stemme 4, compiled and edited by Ronel de Goede and Danie Marais. Sydda’s journey as a collector of recipes and stories about the unique and varied culinary traditions of the Karoo served as fertile inspiration for her work on the cookbook Karoo Kitchen. She lives in Beaufort West, where she continues her work as gender activist.