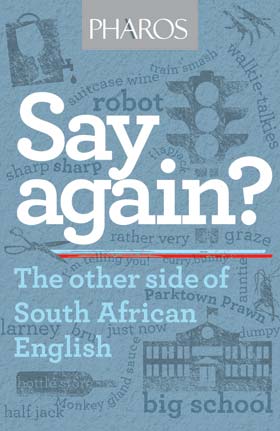 Authors on their new books: Malcolm Venter on Say again? The other side of South African English

Hi Malcolm, why did you and Jean Branford write a book called Say again? The other side of South African English?

Jean Branford, who compiled the Dictionary of South African English, has always maintained that in studies of SAE (South African English) there has been an over-emphasis on loan words and too little awareness of the SAE items which are English, but used differently, from elsewhere. She had always hoped to publish something on this neglected aspect of SAE. However, when health challenges prevented this, she turned to me as her former student and a friend to write the book for her. Jean and I have come a long way together. I completed my master’s and my doctorate, both in linguistics, with Jean’s late husband, William Branford. As I moved up the academic ladder, Jean used to remind me of her first encounter with me in her 1966 linguistics class at Rhodes: during one of her seminars, when I was arguing every point, Jean had stopped abruptly. Gesturing to the table on which she habitually sat, she’d said, “Mr Venter, if you would like to take over, you are most welcome to do so.” I had promptly calmed down, and a lifetime friendship was formed. Years later, on the day that my PhD became official, Jean sent me a telegram (in those days they still had such things!) saying, “Do take over, Dr Venter.”

As the years went by we kept up our friendship. Then one day I received an e-mail from Jean saying, “Please take over, Dr Venter!” I had always been interested in SAE and had given numerous talks on the topic over the years.  I did not, however, “take over” completely. Jean’s handwritten index cards (sometimes almost illegible) provided a sound basis for the work; then Jean and I explored further items and searched for more citations; and finally I wrote the text under Jean’s critical eye. The subtitle, The Other Side of South African English, reflects the thrust of the book – a focus on the English elements of SAE, while the title itself (Say Again?) is an example of this.

Is South African English not British English, finish and klaar?

Most definitely not. In the same way that we have Australian English, American English, and so on, we have South African English. Obviously all of these Englishes have a lot in common with British English, but they also have many unique aspects. Hence the fact that in modern linguistics they are referred to as “Englishes” rather than as “dialects”.

Language can be a hot topic in this country. People tend to get emotional. Is your book mostly on how Afrikaans influenced South African English, or are there other languages involved in the process as well?

Afrikaans has been the main contact language influencing SAE over the years, but other indigenous languages have also had an impact on SAE, both in terms of borrowings (eg muti for medicine) and grammar (eg “a luggage”). This is because of apartheid, which kept whites apart from people of colour, thus minimising the opportunities for linguistic influence. With greater integration in schools and in society it is highly probable that the African languages will influence SAE to a far greater extent.

Languages can make people emotional because so often it is about who has the power. English is an extremely powerful language in this country. Do you agree, do you not agree, what are your views? Afrikaans is also a very powerful language, in a different way. I’m also thinking of the current university language issues across the country. Would you care to elaborate on the influence and effects the two languages have on each other?

I don’t see it as a power play between the two languages. English is the undeclared lingua franca of the country, and it is the gateway to international communication. But everyone has the right, where practically possible, to study through their home language, so I think Afrikaners should have that right, along with the speakers of other African languages (if their languages have been developed to handle the demands of academia) – or they can opt for English. People should not be forced to study through a language which is not their home language – there should be the right to choose that or to “go for English”.

When do you think a language is really influenced by another and when is it merely a mistake, like when a fellow South African – but not a mother-tongue speaker of the language the other person is speaking – can’t find the correct word and uses the word in his own language (but is understood by the other person)? Can you think of examples in both instances? Any funny mistakes or influences you would like to share?

Sometimes it is a case of mother-tongue transfers (which used to be called  mother-tongue interference), which means that the speaker speaks a kind of English which deviates from standard English. For example, many black speakers will say something like “I am having a boyfriend in Johannesburg”, while some Afrikaners will say “I have seen him yesterday” (vs “I saw him yesterday” in standard English). It is also common for non-native language speakers to use words from their own language when they don’t know the word in English, thus speaking a kind of fusion language.

But SAE does not consist merely of the language as it is used by non-native speakers. Native speakers have themselves developed a variety of English which differs from that which is used by native speakers elsewhere. Some of this has come about because of the influence of Afrikaans and other local languages (eg “I threw him with a stone”, “Say again?”, “thumbsuck”), but much of it has evolved in the same way that the English language has evolved (and is still evolving) generally. For example, we have:

The fact that the book includes an index makes it easier for those that want to use it as a reference book.

This is what an independent academic reviewer said about the manuscript:

I found the text well-informed, informative, astute and wonderfully entertaining – surely a good recipe for a “popular” publication! It may have an additional appeal as a reference work as well as being a discerning and shrewd reflection on current SAE usage. It has an appealingly brisk pace as well as being visually attractive. The inclusion of “real” newspaper cuttings, reports, advertisements, op-eds, Wikipedia entries etc makes for a very grounded discussion – often usefully suggesting the sheer variety of possible usages of a term.

Robin Malan (author of Ah Big Yaws? A Guard to Sow Theffricun English) has described it as “a really fascinating social history as well as a lively linguistic record”.