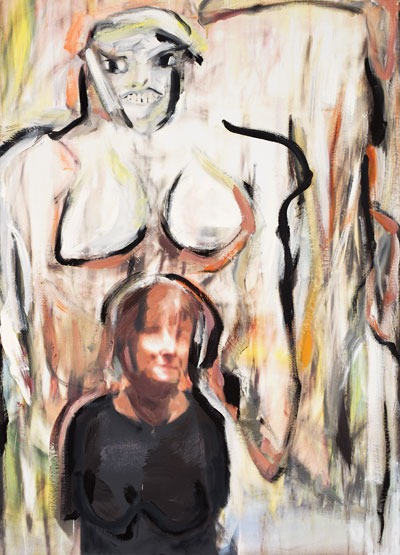 Before moving here, what was your experience of South Africa?

My first visit was in 1987, when I accepted an invitation to row with a composite crew organised by my South African friend Paolo Cavalieri, with whom I rowed in Paris. Before this trip I was also offered two local exhibitions – one in Cape Town and the other in Johannesburg – but turned both down because of the state of apartheid that still existed here. Over the course of the month that I was here I took part in various regattas alongside soaking up all the local culture and tourist attractions.

While I thoroughly enjoyed the trip I didn't manage to make it back until 2010, when I brought my partner at the time over for a holiday. On returning for a third visit the year after (2011), while summering in Cape Town, we decided to attend a play on impulse. The production was Athol Fugard's Statements after an arrest under the Immorality Act, directed by Kim Kerfoot, and apart from being blown away by the staging, that evening would also turn out to be the catalyst for my permanent move to the Mother City.

Not only did I get to forge professional relationships with several of the cast and crew members afterwards – even leading to a few projects as a result – but on returning to the United States I learned that Fugard himself would be visiting my alma mater, the University of North Carolina in Chapel Hill (UNC). There I was fortunate enough to be introduced to him and got to spend a few hours in his company. This meeting would further help open doors for me in Cape Town later on.

When we first met you told me it wasn't South Africa, but Cape Town specifically that you wanted to relocate to. What was it about the city that drew you to it?

On my first trip to the city I remember remarking to a local friend that I simply couldn't imagine someone with the opportunity to live in a place like this – you know, other than having a bona fide excuse not to – opting against it. My father had passed away, my children weren't living in America, and I therefore had no real reason to remain living where I was. So I ended up taking my own advice and moved to Cape Town. After over 40 years of wandering the planet I felt like I had found a place where, finally, I felt centred by its energy. You can literally feel it coming up from the earth and flowing down the Horn of Africa. It’s a very vibrant energy. 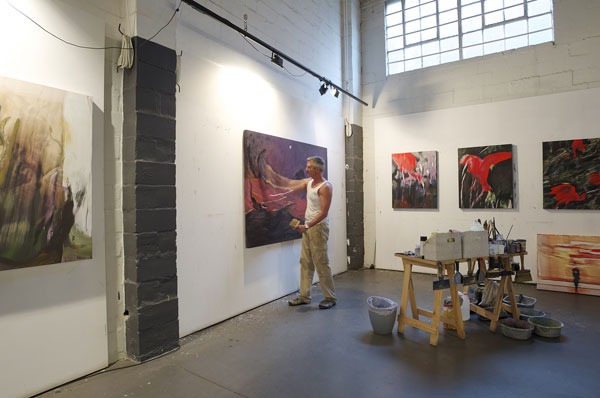 How did finding your current studio space, Atelier AHA in Woodstock, come about?

Like everything else so far with regard to my move here, finding this creative space seemed synchronised. It was weird how everything just worked out, and it was the easiest such place I had ever found. It was the second place that I had visited. I walked in and said that I would take it. At the time it was just an empty space with very rundown facilities. So I ripped everything out, cleared a studio, designed a kitchen, renovated an upstairs bedroom and refurbished the two bathrooms. I had found my home and my creative space to start working in.

Only you didn’t, because all your tools and art supplies were delayed?

Indeed! I arrived here with a few books, my paints and brushes, some paintings, three surfboards, some clothes, my bicycle and a set of 1901 art deco jars that I had bought in Aachen while having an exhibit there. So when customs therefore blocked the goods – resulting in a three-month waiting period – I had to find something else to do until I could paint again.

That was where the idea was born to transform my space into a centre of performing arts, for South African performing artists in all disciplines, which interested me. Which was everything. This was my gift to Cape Town.

We launched in 2013 with six hours’ worth of entertainment. The programme included dance performances by iKapa Dance Theatre and Kash Athanatos. Concerts by Roger Lucy, the Errol Dyers Quartet, Juke Royal and GreenGrassGrows. Staged readings by Kim Kerfoot and Nicol Ritchie. And, magic by Charles Tertiens. Natalie Becker was the MC. In exchange for performing at the launch, each of these artists was then offered a solo run at the space for a future project. 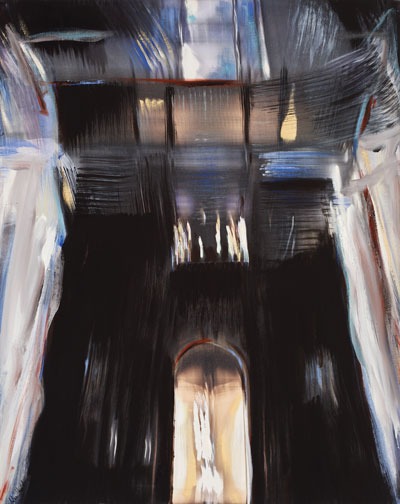 And then your paints and coconut pallets finally arrived ...

And then my paints and coconut pallets finally arrived! Similar to the work I’ve done in the past with theatre or music, I follow the same approach when it comes to creating fine art. With a new city also come new dimensions through which to explore my work, and it was fun getting back into that.

How would you describe the impact that living in Cape Town has had on your work and on your creative process?

Initially when I finally got back to painting, I continued in the style that I'm known for abroad: haptic surfaces with layer upon layer of paint, as well as my initial African influences picked up here. After working through these, however, I started exploring a new technique. Where I would previously draw to set the composition for the paintings, I was now using a camera, changing the apertures, moving it about to capture the vibration of the place, object or person. Then I would work up the image on the computer, bloating the image and changing its values. This would become the armature for the paint, allowing me the tool of actual technology as well as more traditional techniques.

What do you mean by “vibration”?

The vibration is the particular the energy I pick up in places or objects or in people. I am not using the camera to capture that which I see, but rather that which I’m feeling at the time and in that space. My series Architecture of Light, for instance, was inspired by my visit to the Milan Duomo and Basilica of Santa Croce cathedrals, while Cathedrals of Forgotten Dreams was from visits to the Cango Caves and the Sagrada Familia in Barcelona. The finished paintings have nothing to do with the original lieux; rather, they are meant to convey a state of consciousness with which I might be working. By recreating these vibrations on the canvass – through the use of musical composition – I provide a passage across the canvas with crescendos of colour, lines as themes and even places where one can rest. The result is a temporal experience when one looks from one side of the artwork to the other. 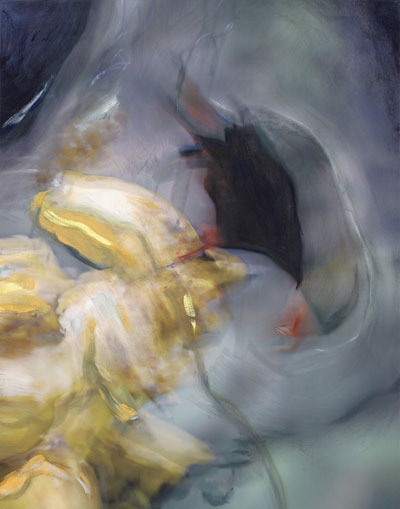 Emergence is your first exhibition in Cape Town, and features pieces selected from the ten different series you’ve created since living here. First, why that title?

As mentioned, moving here has made me feel, for the first time in my life, centred. Over the past three years I feel as if I’ve emerged with, first of all, a whole new body of work, and secondly, a maturation of my artistic process. I have arrived after years and years of, to be honest, very referential painting tied to past periods. I feel as if this new body of work is where I should be today. All the things I’ve grown up with, all the different places I’ve visited over the years and all the things I’ve carried around within myself, I’m finally emerging from all of it.

You’ve mentioned to me that, apart from consisting of various layers, another aspect of work is that it tends to spiral. What do you mean by that?

I am connected to the thread that runs through the history of art I to different periods in the past, abstract expressionism, mannerism or even cave paintings. I then transform them into my own language, which pertains to today's values and perspectives. This is specifically what I'm working with in the ever-evolving series of Odes. When I say my work is like a spiral, I mean that each cycle expands, and each time the point where I'm at is a little further out, more evolved. Each cycle may touch on an earlier element, yet at a different position. As I evolve, things come back, in the form of a technique or a theme that I hadn’t necessarily explored, or even thought about, in many years.

Could you give me an example of one such spiral?

I’m currently busy with a series called Memories of my Mother. She died when I was 11, so in order to create these images I have to go and look for aspects of her in my memory. Similar to musical vibrations, I painted a series of vertical lines (the departure point was a palm forest). This allows for the paintings to become a sort of doorway to another dimension, one through which my mother’s energy and presence can filter through. This process brought back memories of elements that I had previously used. Vertical (and similar horizontal) lines over 30 years ago. Only, then it was to establish a totally different spatial movement, with different themes and subject matter.

Apart from those mentioned already, what were the inspirations behind the other series making up the Emergence catalogue?

There is no one specific theme that interests me, and again it comes back to the vibration of each new place I visit. I’ve been moving around more or less all my life, and have had the opportunity to travel extensively as a result of it.

After taking a tour of the Vatican, an incredible range of vibrations, I started painting the series Vatican, touching on a very wide range of themes that were evoked, while a visit to Birds of Eden near Plettenberg Bay lead to Aviary. It was like walking into the Hunger Games. They had 10 m high nets covering a massive forested area, with all these exotic birds flying around!

The final two series are Portraits, featuring various individuals that I know personally, and Passing through the moment, featuring dancers from iKapa Dance Theatre.

When standing in front of the body of work for the first time, how could first-time viewers go about unlocking the emotional content behind your art?

While I work, I receive what I call "gifts from the other side". Usually when someone looks at one of my paintings and says “I don’t know anything about art” I immediately reply, “But who does?” But I do hope that they will be able to open their hearts enough to receive what has been given to me.

Ultimately, there is a relationship between the viewer and the painting. However, the interaction that takes place depends on how far the viewer wants to take it. It’s a bit like going to a cocktail party and seeing someone that you find appealing. It may be that one has a superficial encounter and then moves on. Or, one could establish chemistry and take it to the next level, and perhaps it even flourishes into an intimate relationship. A painting, like an intimate relationship, reveals more and more about the person/painting as time passes. There is always a mystery to discover.