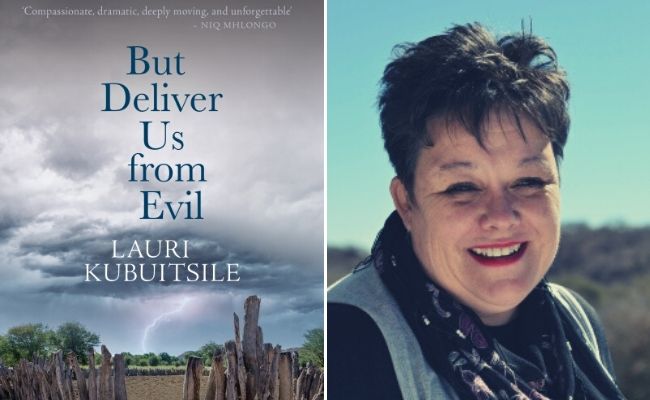 Lauri Kubuitsile has written a novel which enthralled me from the opening pages. She tells an adventure story, essentially, of two young girls who grow up against the backdrop of colonised Botswana during the 1870s and onwards. It is subject matter worthy of investigation for a curious reader wanting to know more about the unwritten history of Africa. Added to this, both protagonists have a supernatural ability to see outcomes of the future or the unseen truth of matters, which enhances the sense of the inevitability of fate. This heady mix allows the reader to escape into the pages of a crackingly good tale, with elements of fact to back it up.

One of the girls is Nthebolang, whose father makes medicine for cattle ailments and who is her beloved role model. Nthebolang is just five years old when her world is turned upside down by jealous and vengeful relatives, spurred on by an unknown man with evil intentions. When Nthebolang and her mother are cast adrift into the veld, with rumours of witchcraft simmering behind them, they strive to find a new place in an unwelcoming world.

In a tandem narrative, a young Koranna girl, Beatrice, lives with her family, who are part of the Gemsbok Koranna of the Gariep. She, too, idolises her father, who dresses and speaks like his Dutchman father, and rides his stallion like a master. Beatrice dreams of riding a stallion just like his and spends her days exploring the veld around their settlement on her own. Riet Towenaars admires his spirited daughter and, after a daring raid to steal the cattle and sheep of the nearby Griqua burghers, whom he regards as thieves who have taken their land, he gives Beatrice a small dagger with a stallion's arching head as its handle. Even though she is only seven years old, he knows she deserves recognition for her heroic nature. She names the dagger after his stallion, Maangees – spirit of the moon.

When the colonial government, bolstered by the local Boers and the frontier army, decide to put an end to the Koranna's stock theft, all of the Towenaars are told that the men will be sent to Robben Island and the women will be imprisoned in the Cape. However, light-skinned Beatrice attracts their attention, and she is abducted by one of the marauders, as they believe she is a kidnapped Boer girl who has been stolen from her Boer parents. They tie her to a horse and forcefully remove her in a bid to return her to her "rightful" people.

With the unsettled backdrop of colonialism and lawlessness, both girls are propelled by their brutal losses into an unforgiving world. Over the years, they grow into strong young women, even though they endure difficult circumstances. Neither loses her desire to be free of constraints, and Beatrice even resorts to putting her beloved Maangees to use in order to save herself on one occasion. Many years later, the two women meet when their paths inevitably cross. Beatrice, now unwillingly married to a duplicitous pastor, Thomas Milner, arrives to take her place as the pastor's wife in the area of Ntsweng. The mission house has a domestic worker and her daughter living in the servant's quarters. They have remained since the departure of the previous pastor. These domestic workers are Nthebolang and her mother.

Nthebolang senses that the new pastor's wife is nothing like the other white women she has encountered, and it doesn't take long before Beatrice finds in Nthebolang the confidante she's longed for. From this point on, their narratives become one, and danger stalks them both, especially since jealousy and rumours of witchcraft have followed Nthebolang all her life. In the village, in spite of the kind leader, Kgosi Sechele, who embraces Christianity, there are ancient dark forces at work that seek their own desires. The evil is strong in the village, and one old woman in particular is determined to have her own way.

Kubuitsile has written an absorbing adventure story which appealed to me from the very first page. Not only do the strong female characters remind me of the novels I loved reading while growing up (Anne of Green Gables, (Jo in) Little women, What Katie did, among others), but the beautifully descriptive passages of the harsh landscape through which the protagonists make their journeys remind me of the land of my youth. The veld of late 19th century Botswana feels very similar to that of the Orange Free State in which I grew up. My happiest childhood memories are of walking through the endless veld of the goldfields, exploring and looking for adventures with my brothers and his friends, or often simply on my own. This novel evokes the sense of freedom and possibility which held no restraints for "just a girl" during those times.

This novel is full of the spirit of adventure and the desire for justice, which make for great storytelling. The desire for justice inherent in both protagonists reminded me of yet another novel which I loved as an adolescent, To kill a mockingbird. This novel is also informative about the history of colonial Botswana and the customs of its inhabitants.

Kubuitsile is a powerful and vividly imaginative storyteller. Her novel moves swiftly through the compelling events of the narrative, and the ending is as satisfying as I could have hoped for. It is a highly recommended read at a time when an enthralling novel is the best medicine. I look forward to reading more of Lauri Kubuitsile's work soon.

Q and A: Janet van Eeden talks to the author Lauri Kubuitsile:

This novel seems to be based on historical fact, Lauri, which makes it doubly fascinating to me. One of my favourite genres is historical literature, and I've written many plays and screenplays in this genre. How did you come across this particular era in history, and what drew you to this period?

This entire book comes from a single letter, a letter written to the editor of a Setswana newspaper that was published at the mission in Kuruman at the time. I found the letter when I was doing research for The scattering. Someone had written to the paper criticising Kgosi Sechele for executing witches at his kgotla in Ntsweng, even though he was a Christian and Christianity did not recognise witchcraft. Kgosi Sechele, a very learned, extraordinary man and a committed Christian, wrote back to say that he had executed only a few witches, all known to be witches, and that the initial accusation had come from the daughter of the domestic worker at the mission house. That bit, the last bit, caught my attention. I know when a year plus can pass and I'm still wondering about that girl that there is something there that I must investigate, and I investigate through my writing. So, the letter was real, and Kgosi Sechele and his son are real; everything else is the answers my mind found to those questions.

You seem to have a love for historical fiction, if I can call it that. Was your novel The scattering a similar genre? Can you tell the readers more about the subject of that novel?

Yes, The scattering is also a historical novel. It also involves the lives of two women, by accident, not design. One woman, Riette, is caught up in the Second Anglo-Boer War, and is put into a concentration camp with her stepdaughters. She falls in love with an Irish man there and is labelled a traitor, so she runs away to northern Botswana. The other woman is Tjipuka. Tjipuka is Herero and is caught up in the German-Herero war. In the final battle, she loses her husband. The two women's lives intersect in northern Botswana at the edge of the Okavango Delta.

Do you have a background in history, or are you drawn to history purely for the love of the stories it inspires in you?

No, I have no background in history. Stories capture me, and I follow them. It has always been like that with my writing. I do think, though, that the stories in the history of southern Africa, especially women's stories, remain, for the most part, untold and undocumented. I think historical fiction, especially, can mitigate that.

You write with an enormous amount of compassion for your characters. Do you find that you also fall in love with the characters as you write them? Which is your favourite in this novel?

Yes, I do fall in love with characters, and when I do, they continue to live with me. Beatrice is by far my favourite in this book. In many ways, she's who I wish I were. I, too, have a strong sense of moral justice, justice which often supersedes legal justice. I'm not as brave as her, though I wish I were sometimes.

I also admire her loyalty to those she loves. She is so loyal that she will intervene to protect those she loves from themselves. Some may find that ill-advised, but there is something to respect there, too.

She's flawed in ways that might make readers dislike her, but I know those flaws, as well. Her ambivalence about motherhood, for example, and her guilt about it (at one point, at least) are something I think about often, and have struggled with in the past, too. I think it is near taboo for women to speak about this, and I wish that could change. It would make being a mother much easier.

You are a prolific author. Could you tell me about other works you have written?

Yes, I write quite widely. I've written quite a few books for children. Two are CAPS approved for grade 7 in South Africa: The second worst thing (Oxford University Press) and Curse of the gold coins (Vivlia). I've written a few books for teens. I regularly write romance and had four titles published by Kwela's now extinct imprint, Sapphire Press. I write early readers for Cambridge University Press, UK; I have eight titles so far in their Cambridge Reading Adventures series, which is being sold around the world. Most recently, a deal was signed in China for the series. I have a book coming out this month with Love Africa Press, called Revelations. It's a romance set in Botswana about HIV/AIDS and the frequent ruthlessness of the so-called fire churches. And, for two years now, I've quite regularly written romance story computer games for a company in Japan. They are very popular in Asia and fun to write.

I really write just what I want. This year, my big objective is to get an acceptance from Mills & Boon. I've been studying their many imprints and have finished the rough draft for the first book, and last week started the second for their medical imprint – of course, it is about Covid-19! As if we can think of anything else at the moment. I just go where my mood (and perhaps muse) takes me. I've been told by publishers and agents in the past to stick to one lane or use pseudonyms. I don't like that advice at all. This is probably why I have more than ten different publishers now and no agent. Ha! Outside of my writing, I'm a generalist with a very wide range of interests, so why should my writing be different?

Thanks for the time and for the wonderful novel, Lauri!