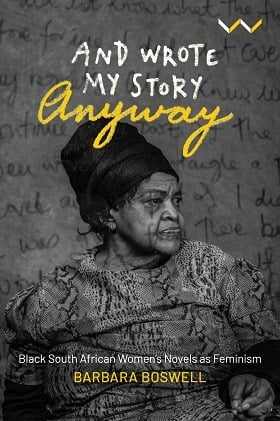 It was the beautiful cover that first attracted me: the writing backsplash and the woman sitting in the forefront. I don’t know what it was about her, but she looked familiar. Not like I knew her, but like I knew someone like her.

The second thing that attracted me was the title: And wrote my story anyway. I found it to be defiant and determined. The title, I read in Boswell’s work, was inspired by the ending of the short story “The toilet” by Gcina Mhlophe.

I had the opportunity to read an early copy of And wrote my story anyway: Black South African women’s novels. It is the latest academic work by Barbara Boswell, a feminist literary scholar and associate professor of English at the University of Cape Town. The book critically examines ten English novels by black South African women writers during the late 20th and early 21st centuries. Why focus on books by Miriam Tlali, Lauretta Ngcobo, Farida Karodia, Agnes Sam, Sindiwe Magona, Zoë Wicomb, Rayda Jacobs, Yvette Christiansë, Kagiso Lesego Molope and Zukiswa Wanner? According to Boswell, these authors and their works were “a series of firsts”.

“They are part of our political and literary history, and they give us insight into black women’s resistance to apartheid and their contribution to shaping the contemporary political landscape nationally and transnationally.”

And wrote my story anyway critically examines the mentioned authors, with their characters and themes, and looks at the methods used by the women to negotiate and/or defy the oppressive systems of apartheid and the African patriarchy.

This book was a fascinating and very accessible read. The book is part literary history and part feminist analysis. It exposed me to black women authors I have not had the pleasure of meeting. I couldn’t believe that apart from Miriam Tlali and Zukiswa Wanner, I had never heard of these authors. I remember thinking: “Ek is beroof” (I was robbed) by my education and by myself. Why didn’t I read these novels at school or university? Why didn’t I make a greater effort to find, read up on and discover black authors?

It made me experience different emotions, from nostalgia to hope and anger. I was furious after reading about the black women guerrillas whose stories of rape and abuse were subsumed by nation-building discourses at the Truth and Reconciliation Commission.

I was impressed by the selected authors’ agency and how interweaved their work and own experiences were. How did they do it, despite all they faced? On page 65, the author answers my question by quoting Miriam Tlali: “This was a way of ‘fighting the system with my pen – the only way I could.’” 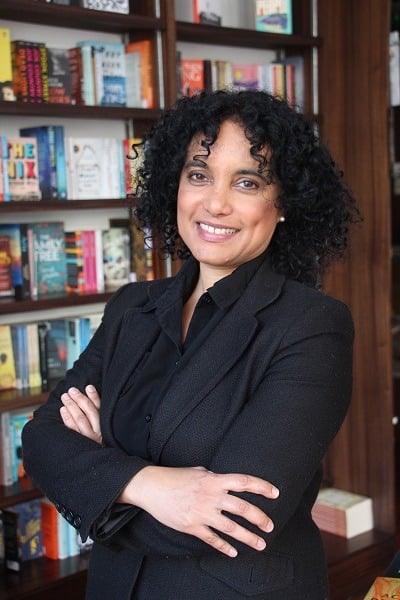 I was also impressed with how detailed each analysis is, and how the author argues and supports the themes of each writer’s work. And wrote my story anyway is a necessary read and recommended for anyone who loves South African literature.

I had the opportunity to interview Barbara Boswell about And wrote my story anyway.

What inspired you to write And wrote my story anyway: Black South African women’s novels?

The book evolved out of my PhD thesis, written at the University of Maryland in the USA. A question I started asking when I went back to university to do my MPhil in the early 2000s was: why did I not see or know many works of fiction by black women writers? It made me want to investigate the structural conditions that work against black women who want to be published. I was also, at that time, a member of a black women’s creative writing collective called Weave, and I heard firsthand how publishers were rejecting black women’s work. This made me want to investigate the how and why of black women writing against all the odds stacked against us.

What kind of research did you do, and how long did you spend researching this book?

I have spent about 18 years researching and writing this book, reading fiction and theory widely and also interviewing black women writers. I also taught many of the works of these writers at universities in South Africa and in the USA, which helped me to refine my research.

Do you feel that the ten novels are still relevant to the struggles women and authors (female) face in today’s society?

These novels span the period of 1975 to 2012, so of course I feel they are relevant. They are part of our political and literary history, and they give us insight into black women’s resistance to apartheid and their contribution to shaping the contemporary political landscape nationally and transnationally.

“Most marginalised and oppressed people already have voices; they do not need to be ‘given’ a voice. What they lack are platforms and opportunities to amplify their voices, because of structural barriers such as racism, sexism and poverty.”

In the book, you conclude that these ten authors published in English to reach a broader audience to expose the inhumane apartheid system. Do you think that was their main purpose, or did they encounter obstacles that prohibited them from publishing in their native languages?

A few of the earlier writers I spoke to mentioned wanting to reach a larger audience to make them aware of the brutal conditions black South Africans faced during apartheid. There were not many presses that would publish in indigenous languages in South Africa during apartheid – nor are there at this moment – so I imagine it would have been difficult to have the works published in indigenous languages in the first place.

Most writers want to reach as large an audience as possible with their writing, so a book published in English would travel much further globally than one in an indigenous language. I know that Lauretta Ngcobo always wanted her first novel, Cross of gold (1981), translated into Zulu, but sadly that was not realised during her lifetime.

In my opinion, a second theme, “giving a voice to the voiceless”, occurs in the selected works. Would you agree with this assessment? And do you believe this theme is a reflection of the authors’ feelings/experiences?

I disagree with this assessment. I do not believe in “giving a voice” to other people. Most marginalised and oppressed people already have voices; they do not need to be “given” a voice. What they lack are platforms and opportunities to amplify their voices, because of structural barriers such as racism, sexism and poverty. Consequently, it is easy for those in power to ignore marginalised people, even when they are “speaking” very loudly and clearly for themselves.

Are black women writers still ignored by the canon and/or struggling with recognition within the South African literary world? Why?

I think black women writers have created exciting opportunities for themselves in South Africa and are exceedingly creative. The area of black women’s writing is burgeoning, with feminist critic Pumla Dineo Gqola calling it an explosion of creativity. Black women poets, especially, have transformed the literary landscape in South Africa. There are many more black women writers represented across all genres now because we have so much more access to publishing.

What I would be really excited to see is more black women-owned publishing houses, because the predominantly white publishing industry in South Africa can be quite exclusionary, as we saw earlier this year with the lack of diversity in the Media24 Book Awards: https://www.news24.com/arts/literature/media24-books-apologise-after-outcry-over-lack-of-diversity-in-its-annual-book-awards-20200620. There was a justifiable outcry about this, which hopefully will lead the industry to reassess itself.

What do you hope readers take away after reading this book?

I hope that readers will be encouraged to read the original works I analyse, but unfortunately many of them are out of print. I would want their curiosity to be piqued with regard to black women’s literary and political contributions to this country. It would also be lovely if black women and girls were encouraged to write their own stories.