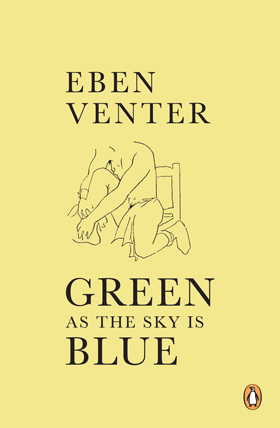 Simon Avend, a South African living in Australia, can be unruly. He often sets out to exotic destinations, indulging his desires in places like Bali, Istanbul, Tokyo, and the Wild Coast.

But along the way unsettling memories arise, of people and also places, especially the cattle farm in the Eastern Cape where he grew up. He approaches a therapist to help him make sense of his past, a process that leads them both on a journey of discovery.

When circumstances bring Simon back to South Africa, he must confront the beauty and bitterness of his country of birth, and of the people to whom he is bound.

Green as the Sky is Blue is a bold, unflinching exploration of sexuality, intimacy, and the paradox that lies at the heart of our humanity. 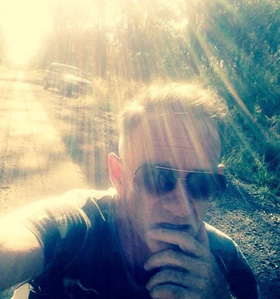 Eben Venter’s seven critically acclaimed novels include My Beautiful Death, Trencherman, and Wolf, Wolf. He is also the author of two books of short stories and a collection of columns, and his work can be read in Afrikaans, English, Dutch and German. Raised on a sheep farm in the Eastern Cape, he migrated to Australia in 1986. Over the years he has won numerous awards for his work, including the prominent KykNet-Rapport Prize. Green as the Sky is Blue was written in partial fulfilment of a PhD in Creative Writing at the University of Queensland.

My father and I were standing on a wall of rammed earth. He was a robust man, and at that time of the year, brown as the earth beneath him. I was just over ten, and stood there in my short khaki shorts. Above us spread the scorched-blue sky of the Eastern Cape.

I looked up, at what? His arm was pointing towards a herd of cattle to the right of the wall. There were two that weren’t grazing, but busy mating.

The bull’s forequarters were raised so that he could mount the cow. His hindquarters, the part that did the thrusting, was solid bulging muscle. She was smaller than him, the cow, with her rippling, shiny cowhide. Excellent condition. I moved away from my father, westerly along the top of the wall. Her eyes, usually so gentle, were bewildered, staring fixedly, until finally, during the last thrusts before she lifted herself and pulled away, terrified.

I looked up at my father. ‘Dis maar net dieselfde tussen ’n man en ’n vrou,’ he said once more. It’s exactly the same between a man and a woman. In a tone of voice that closed the matter. It’s how humans copulate, that’s all there is to it.

We continued walking along the wall. It ran in a westerly direction along the foot of the koppies to the hills beyond dotted with stones and bottle-green besembos. When the rains came, so precious on a farm in the north-eastern Cape, the water ran down the koppies to the wall, where it formed a stream, swelling and widening, until it rushed into the dam below, slowly filling it. The dam, built by my father, was the lifeblood of our farm. My father was in every respect an inventive farmer.

‘There was a certain Dr Jan Bonsma,’ my father said as we walked along, sometimes in front of me as the wall narrowed, allowing for only one person. My father’s stride was long, forward-leaning, and he threw his feet outwards.

‘You see, he soon realised that European breeds didn’t do well here. Far too hot for them. Also too dry. They lost weight. Then, over the years, he developed this new breed, mostly Afrikaner, you know the ones. Red, with big horns,’ and with this he raised his arms and stretched them as wide as he could on either side of his head.

He swung around, tilting his head and widening his eyes.

‘Well, the Bonsmara that run on our farm today were bred from Afrikaners, mostly, and then crossed with Herefords and then shorthorns. That’s what you’ve got here today. Just look at those boude,’ – inclining his head to the hindquarters – ‘you can’t compare them with the Nguni, which has suddenly become the in-thing. No ways, they’d never be able to put on the bulk of the Bonsmara.’

My father stopped, pulled out a large white handkerchief from his trouser pocket, laid it carefully on his palm, and with a single jerk pulled out the burr of a boetebos, that weed with oblong seeds that stuck to merino wool, making it useless. The boetebos was a pest even if you didn’t stock merinos – and my father didn’t. He was, as I said, a clever farmer, and had long ago switched to the hardier Dorper breed.

And nothing more about the bull covering the cow. The afternoon was bathed in a milky blue. To our left were the koppies and on our right the grassy veld. Right in front of me, my father’s legs in his farm shorts. The pale stripe in the crease of his knees was the only variation on the brown of his stocky thighs and calves.

This also stuck with me: that swollen bull. His tool, was all I could think of calling the thick thing. It’s what we have and the cow doesn’t. It became funny to me. My father didn’t bother with the bull after saying what he’d said to me. I was the one who watched the bull pull himself out, then lower his head and swing it in slow motion, finished, that was it for him, before walking away from the herd without even looking back. Then he halted, licked his flank with a broad fat tongue and flicked his tail, as his thing slowly retreated into its sheath. He again dropped his head and twisted Karoo bush, small and round and only just higher than his hooves, and nicely curried after the summer rain.

My father didn’t mention the thing about mating again, no elaboration, not even a bit of advice. Never, ever again. That afternoon, as we were walking along the wall of rammed earth, and later, as we descended and headed in a southerly direction, with the koppies now alongside us, and passed through a kloof from where the farmyard with our house and outbuildings became visible, the whole way, I couldn’t get what he’d said about the bull and the cow out of my head. And how it was ‘the same’ with us.

And then years later, as long as it took for me to be comfortable in my skin and walk into a roomful of naked men, say about ten of them, and be one hundred per cent relaxed about it – well, almost – I recalled that afternoon with my father as we walked together along the wall. The flashback occurred in the coastal town of Seminyak on the island of Bali where I was on holiday with my friend Miriam and her lover, an Aboriginal guy called Ralton.

That morning, I woke up on my bed, bigger than any bed I’d ever slept on in Australia, because that’s where I was now living. There were only two bedrooms in our private villa, each with its own bathroom. Double screen doors opened onto a broad veranda, its pillars and walls painted frog-green, and from there steps led into a secluded garden lush with heliconia and frangipani and strelitzia nicolai.

A ceiling fan above my bed moved the tepid air. My skin shone with perspiration and held to the light it reflected the green sheen of the garden outside.

I opened a social network on my phone. The app is designed for hook-ups and its home page showed a gallery of thumbnail pics of guys currently available. Some profile pics didn’t even feature a face or so much as a headless torso, but just an arm, lifted to expose the armpit. If that sort of thing caught your fancy, you’d start a conversation on the strength of an armpit. It was all part of the fun until you showed genuine interest and exchanged twelve or so lines of conversation, and then suddenly everything stopped. Without warning. Just like that. It was simple: the medium is the message; it shapes you, makes you insecure.

You began to torment yourself: you’d said the wrong thing, but what? Maybe it was the pic you sent, too filthy. Or too vanilla. Or maybe you’re totally out of your league. For sure, you’ve revealed too much of yourself. Your self-image is fucked.