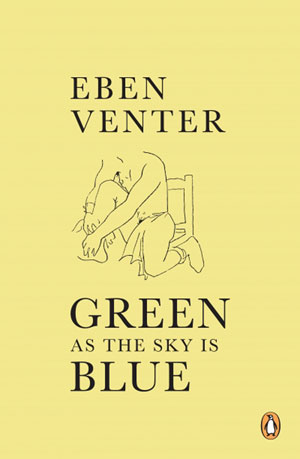 Simon shares his escapades with his psychologist, Dr Spiteri, and he often goes back to one of his earliest memories relating to sex. He spent his childhood on his father’s farm in the Eastern Cape, and one day, the patriarch pointed out mating cattle to his son, told him tersely that this is what happens between a woman and a man, and left it at that. As with many South Africans growing up under a repressive regime, with the religious social control to match, Simon’s unsatisfactory instruction left him uncomfortable, yet it is difficult to pick up on any guilt. Even when facing his mother’s ailing health, he maintains a rather tepid indifference towards her.

Green as the sky is blue is a meditation on a man’s relationship with his sexuality and, to some extent, his parents (or the lack and gaps in his relationship with them). The title refers to the South African vernacular in identifying the colours blue and green. In Xhosa, the colour green refers to either the sky or grass. One has to make the distinction – the green of the sky is blue, and the green of the grass is green. Simon discloses this to his therapist in one of their many sessions, in which his sexual exploits are also heavily analysed using ancient Greek mythology and philosophy. Rather than providing any justification for Simon’s activities – this is not a story of sexual morality – Dr Spiteri uses the ancient Greek teachers’ work to show what it means to act out on one’s proclivities of the flesh.

When Simon’s mother takes ill, he has to return to South Africa and face the fraught nature of the country, with its paradoxes of wealth alongside extreme poverty, racism, repression and family dynamics. Whether this journey back “home” allows for some healing and growth to take place is all up to Simon, yet it is not clear for the reader whether he looks at it that way. In some respects, Simon appears to be an observer while participating in his life. This is evident in the atmosphere of distance in his interactions with the people whom he considers as friends.

While sex is a major theme in the book – and sensitive readers should take note, as there are some very explicit scenes – nature is also a major theme, as many of the locations in which Simon has his engagements are places where nature gets to show off. One particularly vivid scene is in Europe, where Simon goes on a failed writing residency. One of the professors, Dr Karl von C, a specialist in “human language and vocal communication in other animals”, takes them for a walk, and describes the features of the nightingale’s calls. The early evening walk is littered with descriptions of colour, and Simon gets to have a “cruising” experience later on in the park with a tall, well-built man.

Green as the sky is blue speaks to sexual identity, presenting it as something to explore, rather than resist or grapple with. Although some of the scenes may cause heat to rise under one’s collar, there seems to be a kind of deeper search that Simon is undertaking, though it is not always clear, and it may seem a bit indulgent to some readers. The connection to the protagonist, the themes and the story itself wasn’t a lasting one for me, given my own positionality, but it has given me insight into a world where I wouldn’t ordinarily find myself. Also, Simon himself doesn’t seem to demand anything more than an audience from either Dr Spiteri or the reader. Eben Venter’s novel will appeal to open-minded people who are interested in sexuality. If you are conservative, some scenes are disturbing, but, thankfully, they are not violent. I would recommend reading it for your own understanding of how sexuality and sexual expression are not uniform across communities, and that it’s alright that we are not a homogeneous species. It may even spark some curiosity to explore one’s own sexuality – consensually, of course.