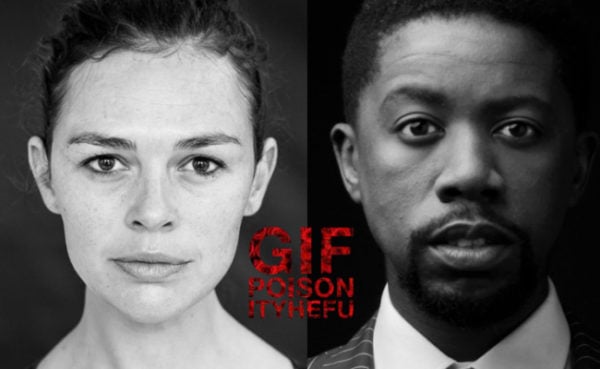 Erwin, would you please tell me about your own background and your involvement with the production Gif/Poison/Ityhefu (which played at the recent Free State Arts Festival in Bloemfontein)?

I’m a New York based Theatremaker, educator and international performing arts advocate from the Netherlands. You can find more information on my website, www.erwinmaas.com.

I met artistic director Ricardo Peach three years ago in New York, and this was the third time I have come to the festival. Last year, together with the artists Nico de Rooij and Djana Covic, I created a large-scale performance work called I-DENT-I-TIES with 50 students with diverse backgrounds from the UFS Qwaqwa Campus, which premiered at the festival and then played at the campus for a week thereafter. This year, I directed the production Gif/Poison/Ityhefu, performed by Atandwa Kani, Tinarie van Wyk-Loots and Mahlodi Kenny Rakotsoane and designed by Guy De Lancey and Michael Garbett. Multiple times, I’ve been a speaker at the festival’s PIAD Forum, and, together with Ricardo and Nike Jonah, I’m the co-founding director of the Pan-African Creative Exchange (PACE), which will be launched during the festival next year (2018).

How did this production (the original one) cross your path the first time?

Gif premiered in the Netherlands in 2010 by NTGent, and it won the award for best new play. I know playwright Lot Vekemans, and we worked together on an English translation of the play. It’s been one of Holland’s most successful plays internationally, having been translated into numerous languages and having had different productions all over the world. Last year, I directed the English world premiere of Gif, titled Poison, off Broadway in New York City for the Origin Theatre Company. It was received very enthusiastically and the production got a New York Times Critics’ Pick.

What is this story about – without giving away everything which happens?

A line in the script said by the man describes the piece really well: “We are a man and a woman who lost a child, then themselves and then each other.” After nine years of separation, they now meet for the first time. Though it might sound like heavy subject matter, I find the play very hopeful. It shows how two people deal with loss, with their grief, in very different ways. It also shows how people who don’t know how to communicate with each other anymore, find a way to come to an understanding of each other again.

Could you tell me about the characters in the story, and also about your experience with the South African actors who play the main roles?

The playwright only describes the characters as He and She, which underscores how universal these characters are. I think we all have both of them in us. So many audiences, both in New York as well as in Bloemfontein, told me that they constantly switched with whom they identified. I think it’s a testament to how well this play is written, and the fact that we all indeed can see both sides in ourselves. I also added a vocalist (that wasn’t written in the script). There’s something about the vulnerability of the human voice that really fits with this piece, and I believe it adds an incredible soundscape. Working with all the performers was wonderful. They are all highly professional, and Tinarie and Atandwa are, of course, well known actors in South Africa. They have a great chemistry on stage and they are doing an excellent job.

The production played at the Free State Arts Festival. At the same festival, Antjie Krog mentioned (in her Sol Plaatje speech) that this country should be obsessed with translation. What gave you the idea to have this production translated into three languages?

What is the key to translation for an audience who do not necessarily know all the languages used in the play? What did you do to make the play understandable (in terms of language), and did this differ from the original play (the text, repetition of phrases, etc)?

First of all, you need a great translator. Willem Anker did an amazing job. Being a writer and playwright himself, he’s very sensitive to the rhythm, language and action of the piece. Fortunately, the original play already used a lot of repetition, so we were able to use this to say the same thing in multiple languages. We also added English subtitles to the entire piece, which made it inclusive and understandable for many (including for hearing-impaired audiences). In a country like South Africa, I think subtitles in theatre would work really well and make multiple languages accessible to larger audiences.

Translation involves not only language, but also human behaviour. Please tell me something about this play – and its universality, or lack thereof.

Translation of theatre requires a completely different skill to any other translation, since you’re indeed dealing with human behaviour, subtext, rhythm, etc. Some people say that you can never really translate theatre – it will always become an adaptation. But, at its core, any great piece of theatre has an innate universality in it that people all over can relate to. That’s why certain pieces are being done in numerous languages, and all over the world, again and again. Gif is such a piece.

Language is not the only tricky issue in this country. Here is another question about human behaviour: do you think people in different culture groups experience loss and grief in the same way? Or show it the same way? Which challenges did you experience while being busy with this production?

I think everyone experiences loss and grief in a different way. Not just people in different cultures, but also people in the same culture. It’s a highly personal experience, and that’s exactly what this piece is about. I think it is exactly because it shows such a personal experience, that it relates to so many people from different cultures all over the world. That’s the funny thing about universality. Often, a highly personal experience makes something very universal. In the end, almost all audiences (both in NYC and South Africa) were very moved by the production. Sure, people from different languages and cultures react to various things differently, but in the end, the piece has an effect on all of them.

What did you discover regarding South African audiences while being busy with this production?

That they are not much different to audiences elsewhere … 🙂

Will this play again elsewhere in the country – and when?

It will be performed at the US Woordfees in Stellenbosch and the KKNK Festival in Oudtshoorn next year (2018). We hope that it will go to the Market Theatre in Johannesburg next year as well. There’s also been interest from international venues and festivals, so who knows … Tell your readers to check it out when they have a chance … 🙂