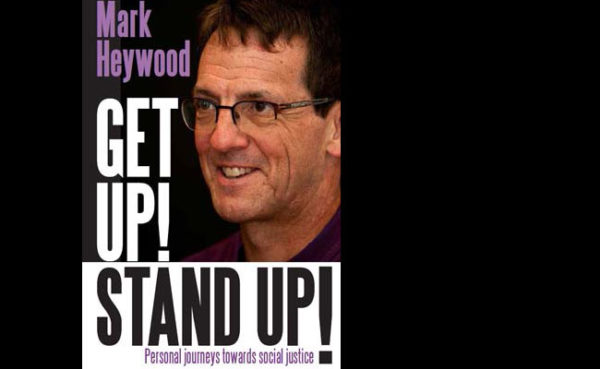 South African civil society has many heroes, and Mark Heywood is one of them. His personal and political memoir is accessible, because Heywood is not only a lover of social justice. He loves literature and punk music and is able to weave this into his writing. He is very clear about how he sees the role that art plays in bringing about a better world. His book, Get up! Stand up! Personal journeys towards social justice, is not just about where he was and what he was doing over the years before and after he came to become renowned in South Africa. Heywood was the product of the African upbringing of British expatriates. Botswana, Nigeria and Ghana were the countries where he spent his childhood. He attended a prestigious boarding school in England, where his education about literature galvanised his independence of thought. When he was a schoolboy, his readings took him to realms in which injustice was brought into question. Although he had already been to and fallen in love with South Africa at the age of thirteen, his deep love for the country began at the same time as his serious journey into books. Listening to the words of artists like Johnny Rotten of the Sex Pistols added fuel to Mark’s dissatisfaction with the status quo – abortion was a taboo topic, but Rotten went there. It was the power of words that truly awakened Mark’s consciousness, and the stories that came out about apartheid South Africa, as well as his own childhood memories and his experiences at the Rand Daily Mail, created fertile ground for an activist.

In this book, one is taken on the unique journey of an anti-apartheid English activist during the Thatcher years, who goes underground (as Jim or Sean Kelly) then on to be a social justice warrior in post-1994 South Africa and up to this day. Get up! Stand up! is a deceptively small book for one that is packed with so much history. For example, he writes about Hillbrow and Alexandra in the late 1980s while he was writing his MA at Wits and falling in love. That period in South African history is teeming with stories. The triumphs and traumas need to be aired out – especially the traumas. The country was teetering on the precipice of civil war, and it is time to learn more about that so that we can remind ourselves of the compromises that were made in order to bring about democracy. Mark Heywood does well in this regard.

The making of the AIDS Law Project, the Treatment Action Campaign and the birth of Section 27 make up a considerable bulk of Get up! Stand up! His book reiterates in many places the importance of civil mobilisation. Indeed, that has been his life, and that is what the book is ultimately about. He provides a lot of detail in some of the stories that made excellent cases for addressing social injustice at state level. It can become a little bit cumbersome for someone who wants to remain in the story narration rather than follow the legal details of cases.

In multiple instances, I wanted to look up the literary references that are littered all over the book and that provide some excitement because they serve as an invitation into Mark Heywood’s personal life. In Get up! Stand up!, there is a lot more of the political than the personal, which makes sense because this is the memoir of an activist, but I would have loved to read more about his personal life. Ultimately, what I have taken from this book is the story of a man who could have continued with his life of privilege, but instead chose the road of social justice in a way that few can speak for themselves today.