Often events from the past are seen as far removed from contemporary circumstances. Gadamer urges people not to shy away from this apparent chasm but to embrace it as a space filled with interpretative opportunity. The Dasein, the being-there of mankind, is what binds people together. Participation in life is what binds human beings to one another – irrespective of the spatial and temporal distance between them. Being human transcends culture, time, context and circumstances. Gadamer makes it very clear that understanding cannot be facilitated by external methods. Understanding is a process that continues and grows as we engage with it. This is a lesson in humility all hermeneuts should learn: the moment one thinks that you have grasped the truth, it seems to slip through your fingers again. The interpreter plays an important role in this process of coming to understand. Access to the past is limited and therefore the interpreter has to reconstruct that horizon as accurately as possible, while keeping the influences of his own horizon, prejudice and pre-understanding in mind.

Von Rad describes human understanding by referring to the credo which he identifies in Deuteronomy 26:5–9. These few verses summarise the whole of the Hexateuch. Throughout the history of Israel this credo is repeatedly reinterpreted and contextualised by God’s people in new contexts. Connected to this is Von Rad’s view of the reinterpretation of prophecy along the same lines: prophets drew on the acts of God in the past and reinterpreted and applied this knowledge to their contemporary circumstances.

What both Gadamer and Von Rad illustrate is the fact that each individual exists within a horizon, which is the background against which he or she comes to understanding. As the personal horizon develops and interacts with other horizons, the individual’s ability to understand also develops. Through the process of personal engagement, the person understands better than before. This process is not only focused on the other’s horizon; the interpreter also has to grow in self-understanding. Prejudice, pre-understanding and foreknowledge all contribute to or hinder the process of understanding. Some horizons are closely aligned while others are foreign to one another. Even though this influences the difficulty of interaction between the horizons, it does not alter the process of reciprocity. It is important to note that in both Gadamer’s and Von Rad’s minds this is not a methodical approach to understanding – it is a living, continual process of coming to understanding. The process of understanding is universal and is constantly happening, whether someone is deliberately engaged in the process, or whether it is happening subconsciously. Humans are constantly learning by taking things in, analysing, evaluating and responding to them.

Johannes N.J. Kritzinger is a South African missiologist and a former professor at the University of South Africa (Unisa). Since the late 1980s he has been involved with other missiologists from Unisa to develop what became known as the praxis matrix. This matrix is useful in either analysing or transforming communities. The advantage of the matrix is that it is not a rigid model, but a framework of engagement which facilitates the fusion of horizons. This not only places the matrix in the missiological sphere, but also sets it apart as a hermeneutical approach.

In conclusion we find that understanding is not something that is hidden and simply needs to be uncovered by some external method. The interpreter is not some expert that unlocks meaning mechanically and objectively from a distance. Understanding is a human process which requires involvement and interaction. It is a continual process without any well-defined end point. The process entails commitment and interaction between the respective parties. They abandon themselves in the game of understanding. It is a discovery of both self and the other at the same time.

Horizons are explored and crossed with the purpose of effecting a fusion of horizons. This process is characterised by interpretation and reinterpretation – a reciprocal activity in which all parties participate, both as subject and object of the process of understanding. All aspects mentioned in this article play a role in establishing meaning. The praxis matrix lists seven aspects of engagement where the other is encountered. Naturally there are potentially more levels of encounter than these seven. Things like economics, politics, geography and level of education play a significant role, but the matrix does illustrate the hermeneutic principle sufficiently. When human beings engage in a process that facilitates understanding, they are confronted with other horizons, which requires them to make adjustments to their prejudice and pre-understanding. They are confronted with their own horizons and should make use of the opportunity to better understand themselves. The more self-understanding one has, the better the chances are of understanding others.

From examining the contributions by Von Rad, Gadamer and Kritzinger the conclusion is drawn that hermeneutics is a common human endeavour that forms part of being human; irrespective of the field from which one approaches it. Von Rad uses the credo and prophecy as principles to illustrate mankind’s continual involvement in the creation of meaning. By interpreting, reinterpreting and applying truths to their own context, people come to understanding. Gadamer’s analogy of play is a striking example of how the process of understanding requires a total surrender. One can remain an outsider, or be a spoilsport, when one participates in a game. One has to go all out. The same applies to understanding. It is only in an honest, transparent surrender to the exploration of horizons that a fusion of these horizons can become a reality.

Kritzinger’s praxis matrix highlights the social necessity of mankind to connect with others. No human being can exist in isolation, and attempting to understand from the outside inwards is artificial and limited. The best way to understand is from the inside outwards, where one participates in a process of which one forms part. This reciprocal process demands commitment to the process. The better one understands the other, the better one gets to understand oneself.

To reflect on the past, to evaluate the present and to reach out to the future are all part of the continual process of coming to understand. 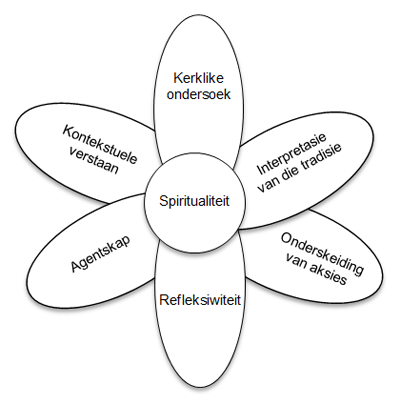 Boda, M.J. 2012. Praying the tradition: The origin and the use of tradition in Nehemiah 9. Berlyn: De Gruyter.

Costache, A. 2017. Gadamer and the question of understanding: between Heidegger and Derrida. Lanham, MD: Lexington Books.

Horn, P. R. 2017. Gadamer and Wittgenstein on the unity of language: Reality and discourse without metaphysics. Abingdon: Routledge.

Odenstedt, A. 2017. Gadamer on tradition: Historical context and the limits of reflection. Berlyn: Springer.

Seitz, C.R. 2007. Prophecy and hermeneutics: Toward a new introduction to the prophets. Grand Rapids, MI: Baker.

Wierciński, A. 2011. Gadamer’s hermeneutics and the art of conversation. Münster: LIT-Verlag.