This article forms part of the ongoing university seminar, with new essays continually being added. Please click on the “University Seminar 2016” banner above to follow the ongoing conversation and to read more essays on education, access, transformation, language and the Constitution. 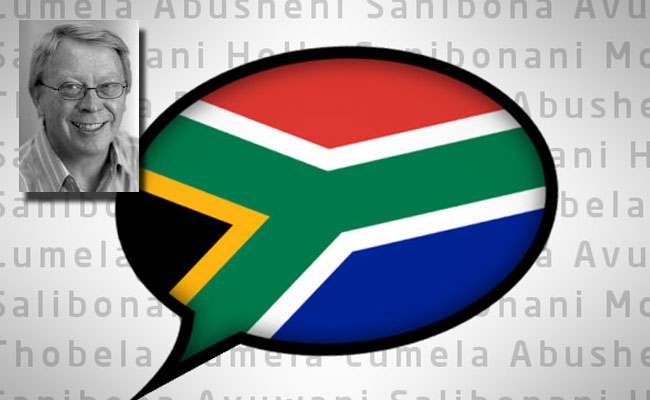 Robert Greig was the arts editor of the Sunday Independent and lives in London.

Those who live in South Africa now are best placed to deal with the government’s decision to transform Stellenbosch University and Pretoria University into English-language universities. From what I see, the decision has been met with a degree of necessary outrage, understandably verging on the hysterical. Also, it does not constitute language murder, but it does erode an element of language health in future. And since no language exists in isolation from others, the disadvantaging of one will impair the others. What seem discrete or separate zones are, as every student of South African history knows, also liminal sites of exchange and interaction. Languages exist in a system of language; no cordon sanitaire exists between them, nor border control, though of course the French, with their Acadamie Francais, policing new entries, might like to pretend otherwise.

To put it bluntly and crudely for the sake of emphasis, Afrikaans is the only link available to major European cultures and ideas. Its marginalisation in universities will inevitably impair an institutional link: individual connections are inherently fragile and inadequate. What this means is the exclusion of intellectual and imaginative connections and influences. To be specific, some European languages and cultures are notable for forms of conceptual thought that are not as prevalent in English. (George Orwell is not quite Heidegger.) It may be a matter of faith, but I don’t think so, but I suspect Breyten Breytenbach would give me a more accurate understanding of Paul Celan than an English translator would. A concrete example is that in the 1970s it was Die Burger that for weeks devoted page after page of Uys Krige’s translations into Afrikaans of Constantine Cavafy, George Seferis, Pablo Neruda and others. Krige’s Wagtende op die barbare has an emotional complexity and immediacy that more prosaic American and British equivalents do not and cannot have. I have not experienced an English-language production of, for example, Mother Courage that suggested that it involved more than some sentimental triumph of the human spirit. To be more specific: I believe I would better understand the poems of Leopold Senghor or Aimé Césair translated into Afrikaans rather than transliterated into English. Afrikaans and Afrikaans speakers are a unique link to a different world – which extends to countries like Indonesia. You mess with that link, you impoverish: it’s simple. An ecology is at risk.

The government’s plan has other, more readily understand and equally worrying implications. They involve principle, and unless we are clear about principles and their application, attempts to arrest the process are likely to take the form of anguished wails.

Nothing new here, you might say, and make despairing references to cronyism, kleptocratic behaviour, or treating was at best a tactic of redress – affirmative action – into a fixed policy element.

Dislodging Afrikaans as a medium of instruction is a variety of land grab. It is irreversible. It is based on assumptions of state authority that are wrong.

If they are erroneous, the issue is whether the actions are, through the application of logic, counter-argument or persuasion, reversible. I doubt it. It’s not in the nature of governments to listen or hear, and if they understand, to accede: these principles may govern the best academic debate, not power. President Paul Kruger’s remark to the Uitlanders: “Protest, protest, protest all you like – I’ve got the guns” comes to mind.

However, the Pretoria and Stellenbosch plan will involve the depletion of national, intellectual capital. It will encourage private sector organisations to follow suit. It will contribute to the notion that all South African citizens pay tax and have the right to vote, but some citizens are more entitled to the benefits of citizenship than others; and the latter class should remember who has the guns.

But ultimately, challenging the decision requires political, legal and some civil action. And action, for good and bad reasons is, to culturally or racially disadvantaged citizens, understandably scary. The new privilege of the formerly privileged is to carp, moan and wail “woe is me” and play the “Yes, but …” game. This approach has all the self-importance and comfort of the armchair dissenter.

These seem to be potential areas of challenge and action:

The state’s decision was based on some discussions with the universities and alumni. (I suspect the underlying principle was that of Paul Kruger’s remark but perhaps this is cynical.) However, the universities are financially dependent on the state and, to their discredit, seem to have either colluded or resigned themselves to a violation of academic freedom.

Consultation, for want of a better word, with the universities alone is not enough. The matter should have been subject to systematic public discussion. The projected change bears on the interests of taxpayers and the private sector: the universities cannot speak for them, and principals, being state employees, cannot or are not able to publicly oppose state initiatives. Add to that the cynical thought that university principals in the last decade or so have not been noted for their tendency to stand up to bullies.

The two universities represent significant historical financial and other investment by Afrikaners, individuals and corporates. Whether we like the basis of making that investment or not, or however we define it, the sources of private investment are discrete and definable. They were made on the reasonable assumption that the two institutions would not be altered in nature, and characteristic of that nature is the recognition of the language of Afrikaans. The state is changing that. The change, its extent and the way it has been implemented and the loss of different forms of historical investment indicate a basis of compromise.

What is not negotiable is that universities should be open to all who qualify academically and can secure fees. However, it might be worthwhile for alumni to present a case for a tier of academic institutions free to emphasise the use of language or particular focus and reasonably expect the state to contribute to the costs and those taxpayers using these institutions, rather than public ones to claim a tax deduction.

The state is the custodian of those assets not the owner. It has a duty of care to ensure that their use is not exclusionary or partial, and does not violate testamentary or other intentions related to advancing tertiary education. It seems logical to expect that if the state is fundamentally redefining what were Afrikaans universities, it should make alternative provisions for Afrikaans language instruction. And, not least, treat this change as it should have from the start as a matter of public interest involving public consultation rather than administrative procedure. The matter is too important to be subject to the authority of the government of the day. And precedents and alternatives exist, like second-tier specialist academies, colleges or universities.

I suspect we would object to turning the Groote Kerk into a studio for English ballroom dancing classes or the Voortrekker Monument into a research centre focusing on the roles and benefits of MK. Among its virtues – which do not include price – Wally Serote’s Freedom Park had relative respect for the commemoration of Afrikaner past.

There seems to be a case for public mobilisation. If the state does not change its plans, then clearly those private sector entities and individuals who intended to support the two universities should not. If they do, they should be named and shamed. It is possible to divert private funds from one-size-fits-all institutions to creating particular one with discrete purposes and which acknowledge the need for particularity itself in education.

Ultimately more is involved than the fate of universities known inaccurately as Afrikaans ones. I can’t help thinking of my late father, a Scot who, like my mother, became a member of the University of the Witwatersrand’s council, or his father, who in the 1930s took time off as professor of English and raised £1 000 000 for the university.

One day in the late 1960s, when I was an English undergraduate at Wits, my father said, “Call yourself a poet?? (I tended to.) “You know one of the great world poets now occupied your grandfather’s office in Central Block. Have you ever bothered to knock on his door, listen to him? His name is NP Van Wyk Louw. Do it.” I did – and connected with a world wider than that of my Oxford-educated professor with his “Nadine Gordimer? Not really part of the canon … George Eliot, Dickens, you know.”