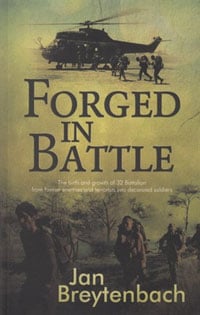 Buy Forged in battle from Kalahari.com

Like all periods past, it now looks like a simpler time: white South Africa at odds with black South Africa and informally involved in its neighbours' affairs. There was less crime in the country, much less it seems, and violence was of the political and military kind and contained in certain arenas: townships and the Border and what lay beyond – Angola. To the white population there seemed to be more rumours than actual unrest and distress. And yet there were people involved in situations of tension and violence that got as bad as hijackings, robberies, muggings and attacks are today. This was the background in 1986, when the book under discussion was first published.

Reading it in 2014 I think there is good call for a Thomas Pakenham to step forward and address the whole business of the Border War from an academic viewpoint, for someone to take the various subjective reports by troops, people of rank and journalists and come to grips with exactly what happened and why and how. When this happens, first-hand reports like Jan Breytenbach’s Forged in battle will be an important source of information. The book distinguishes itself from many recent publications on the war by not being a declaration of regret and indignation and helplessness, the kind of thing you see especially when troops take up the pen, often in great resentment of the men in authority. There could be a debate on this issue, though Commandant Breytenbach was not one to use his troops as cannon fodder and they greatly admired him. He was there in the front lines, as were his fellow officers. He describes a number of incidents in which he had to shoot to save a situation or even lives, on more than one occasion his own.

The publication deals with the early days of the well-known 32 Battalion, a group of mostly black Angolan soldiers trained and repeatedly led into combat  by the white Commandant Breytenbach. There is not a page that does not urge the reader to hurry on to the next one.

I haven't been this engrossed since I read Jarhead, Anthony Swofford's account of his experiences as a US Marine during the Gulf War early in 1991. But whereas that book deals with the frustration of a narrator of minor rank who never actually fought, Breytenbach's book is full of action. It is also written by a senior army man who has studied, and in truth enjoys, the military arts; a man, the reader senses, who seldom, if ever, felt he was not master of his own fate.

The book, though contributing to military history, is so colourful and entertaining that it brings to mind the popular Southern African fiction of John Gordon Davis, Daniel Carney and Wilbur Smith. It not only shares in the Sub-Saharan setting and the regional military and political upheaval of the 1960s, ‘70s and ‘80s, along with white concerns about autonomy and even safety, but there's the same pacing and sense of adventure and an impressive personal courage surrounding the main character. Breytenbach is an admirable protagonist, though he is too experienced and mature, or perhaps wily, to make himself out as the hero of his own dispatches, often employing a dry sense of humour at his own expense, and at other times downright cynicism, in telling his story.

The cynicism and moments of despair shine through in gems like the following: Breytenbach is referring to the Angolan population who suffered much in the war – first the one for independence and then the civil war following that. “Some people have the ability to see wars come and go, to adapt to whichever situation comes their way, to let fate roll over them without offering resistance and to consider their way of life to be completely normal. Maybe it is. Maybe we are the abnormal buggers who always strive to change situations and people to suit us, not always for the better.” This is when we see how Breytenbach's adventurous and, some may argue, even violent side yields to meditation and even a philosophical double take. This is made all the more poignant when one considers that the book, the reissue, appears in the author's 80th year. It is the work of a brave but practical man looking back. He is also a competitive and playful man: “I was perhaps a little bit envious because I have rarely had the opportunity in my military career to spring a good ambush.” To some men, war is play.

The most telling chapter does not involve battle. Breytenbach makes use of a case study to ponder “Courage and cowardice”. One of his troops ran from the enemy after hours of shooting at them and being shot at in return. He was gone all night. The next morning the young man approached Breytenbach and admitted to his failing. Breytenbach took no disciplinary action against him and kept the matter quiet, though it evidently left an impression on the commandant. He talks about physical courage, that required of a soldier in battle, and moral courage, that required of a man who speaks up and against reigning opinion. Breytenbach claims he has physical courage and not really the moral kind, which is why he avoids conferences, and though the reader hardly takes this seriously, the statement does point to the fact that Breytenbach was a man of action and not really all that enamoured of his seniors and the politicians he served. He makes out an implied case for the Afrikaner cause with brief references to Boers, the Union's invasion of South-West Africa in 1914 and conditions in North Africa during World War II, but one gets the sense that the man is greater than his cause. In his mind a good fight beats an elaborate policy any day.

Breytenbach was a soldier and outstanding in his field, similar to the way a Branson, Gates, Theresa, Sharapova or Warne excelled in other contexts. In a new political context he may be suspect. Inviting us (we with our racial sensitivity, our politically correct sensibilities, our 21st-century hindsight, our general wariness of what is the correct attitude to adopt) to judge him, he runs the risk of inviting contempt, hostility, outdatedness and even ridicule.

To hell with that, I say. Read this book, whether you're into military affairs, African history, adventure, action movies or masculine power plays. Read it.