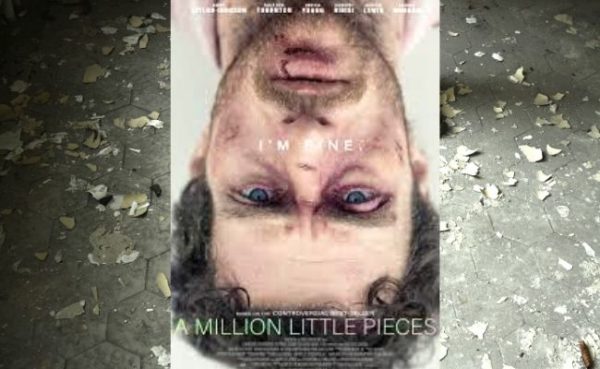 A million little pieces is a new film starring Aaron Taylor-Johnson that opens nationwide in early April this year. It is based on the bestselling book by James Frey, largely recounting his personal experiences as an addict in recovery.

No surprise: the themes are hard. But even more so in territory where, among others, Requiem for a dream, Trainspotting and Girl interrupted have to a lesser and greater degree created big, big shoes to fill.

In A million little pieces Taylor-Johnson plays the character of James Frey. The story begins with the protagonist’s drug-fuelled crash and his subsequent check-in at a rehabilitation clinic at the insistence of his brother and the law courts.

He has little choice. A doctor warns him that his alcoholism and long drug addiction have imperilled all his major organs and his life. Behind him lies a path of destruction. The centre is a way out, but only if he submits to the process.

On the backdrop of his stay is the chart of his interactions with a variety of characters and the development of a love relationship – against the institution’s rules of fraternisation – with a young woman called Lilly.

Among the residents are the quirky and engaging Leonard, played by Billy Bob Thornton, and Giovanni Ribisi’s John – a fragile, ex-con father unconvinced of his ability to return to a “normal” life. Among the rehab staff, Juliette Lewis takes the role of a staid, in-house counsellor with an addiction story of her own.

As these things go, everything is complicated – a roiling stew of pain and sorrow; little victories followed by crushing setbacks. All the while, there’s hope that keeps us rooting for a happy, but improbable ending. “Only 15 per cent stay sober after they leave, and that’s just the first year. They don’t tell you that statistic,” Frey tells his brother during a visit.

Yet, like the many residents, we persist – even if it’s for a rollicking yarn.

There are many points of interest in this work, directed by Taylor-Johnson’s spouse, Sam: the occasional cinematic interludes that illustrate James’s fraught journey; glimpses of his past and descent to rock-bottom; his difficult relationship with his brother; the curious personalities among fellow addicts and treatment centre staff; and, of course, the love entanglement. But this is precisely where the film trips up. While the performances by Taylor-Johnson, Ribisi, Thornton and Odessa Young, as Lilly, stand out, they only leave you needing more.

In the absence of time to roll out more of everyone’s contributions, it is the rehab process that dominates. Like a photograph in a busy train station, all that remains sharply visible is the background.

The setting is perfect – a colourful story on the drab canvas of the rehab institution – but even the thread of James’s big reveal deflates somewhat in the spaghetti of intersecting storylines.

Still, the telling remains taut. In one particular scene where Frey receives a secret note from Lilly, the glass wall disappears and we’re absolutely with him in his frustration to find some privacy; his urgency to get to the note; and his ultimate surprise and emotional U-turn when the content is revealed.

A million little pieces is an engaging film that will transport you from your comfortable theatre seat, providing some limited insight into difficult lives that people endure. If anything, it might encourage you to go back to read the novel from which the tale was woven.