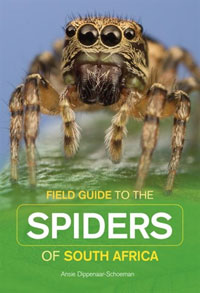 Buy Field guide to spiders of South Africa from Kalahari.com.

Did you know that on a weight basis spider silk is five times the strength of steel? Ansie Dippenaar-Schoeman, who has written a book titled Field guide to the spiders of South Africa (LAPA), tells Naomi Meyer about the fascinating world of the Arachnida.

Hi Ansie, please tell our readers about your background.

I retired at the end of October 2013, after 46 years of service at the ARC Plant Protection Research Institute. I started in 1967 as a technical assistant and worked my way up through all the post levels to retire as a specialist scientist. However, I was reappointed at ARC-PPRI on a 2-year contract as a “retired mentor of the ARC”. I have also been reappointed as extraordinary professor at the University of Pretoria for the next three years. I will continue to be involved in the South African National Survey of Arachnida, the running of the online Virtual Museum and the African Arachnida Database, and hope to continue with research on the crab spiders. I have authored more than 250 publications on spiders, which include nine handbooks and 125 scientific publications, and co-supervised 22 students from seven universities.

What is the South African National Survey of Arachnida?

South Africa signed the Convention of Biological Diversity (CBD) and we are obligated to develop a strategic plan for the conservation and sustainable use of biodiversity. To meet the requirement of the CBD, the South African National Survey of Arachnida (SANSA) was initiated in 1997 by the Agricultural Research Council (ARC). SANSA is an umbrella project implemented at a national level in collaboration with researchers and institutions countrywide, dedicated to document and unify information on arachnids in South Africa. The information gathered is organised in a relational database. The material sampled is deposited into the National Collection of Arachnida (NCA), which was established in 1976 at the ARC in Pretoria, South Africa. A wealth of information is now available for research and production or research papers and books (Google ARC SANSA).

When I see a spider, I want to kill it. Without thinking. Should I?

No, most spiders are harmless and they do play a very important part in nature. We market spiders as the “Farmer’s and gardener’s best friend”. Spiders are very important predators in crops and they prey on a variety of pest species. Of the more than 2 000 known species of South Africa only a few come into contact with humans and when they bite the wound might need some treatment.

Which ones are really dangerous – and how do you know at first glance?

South Africa has a rich fauna of spiders, with about 2 000 known species. A variety of spiders occur in houses and outbuildings and it is inevitable that they will often come into close contact with humans. Most spiders will avoid physical contact, but when they are accidentally touched or squeezed, in self-defence they might deliver a bite. Very few spiders are potentially harmful to people. The spiders can be divided into the ones that produce neurotoxic or cytotoxic venom. The neurotoxic venom affects the nerve system and it is mainly the button spiders (widow spiders) that are the most important. They belong to the family Theridiidae genus Latrodectus and six species are known from Southern Africa. The cytotoxic venom affects the tissue around the bite site and the only spiders with cytotoxic venom so far known to be of medical importance in South Africa are the sac spiders (Cheiracanthium spp) and violin spiders (Loxosceles spp).

What should I tell my children - what should they do when they see a spider?

They must treat spiders with respect as spiders can bite, but spiders are amazing animals with unique behaviour, as they produce silk threads which they use for all kinds of activities. Unfortunately spiders are widely feared and much maligned, yet their natural and academic importance cannot be overstated. They compromise one of the largest groups of land animals. They are commonly found in and around houses, in gardens and on farms and are one of the more abundant types of wildlife seen on all walking trails. They are important predators in terrestrial ecosystems and for many their webs are tangible records of their complex behaviour. Spiders therefore provide children with a wonderful opportunity to study animal behaviour by using spiders for school tasks research and for school expos.

Tell us about your two online databases, one of which is the virtual museum you mentioned, that involve the public in spider research?

The SANSA public awareness activities focus on involving the public through workshops, survey participation and lecture series. Information is made available through handbooks, CDs, posters, newsletters and factsheets. Of immense value are the photographers that take part in the online SANSA Virtual Museum. More than 4 000 photographs are already linked to the SANSA database, providing much-needed information and distribution records for the production of products like the series of full-colour handbooks on spiders that are now available. The digital camera has opened up a new world in science. As part of the Virtual Museum of SANSA we are receiving very informative photos of spiders and other arachnids from areas throughout the country. Not only do the photographers contribute to taxonomy, but each record also provides information on the distribution of the species. This information and photographs are essential for the Spider Atlas and the Red Listing project as well as for the DNA barcoding projects that are presently underway. The photographs are the basis of the handbooks, such as Spiders of the Kalahari, Spiders of the Savanna Biome, and Spiders of the Grassland Biome that were recently published, as well as the new Field Guide. All these images are also fed into the online African Arachnida Database (AFRAD) and will eventually play an important role in the Encyclopaedia of Life, where a page for each species will be available (to find, Google SANSA Virtual Museum). Photographs can be mailed directly to Ansie Dippenaar-Schoeman at [email protected] for speedy identification and placement on the web.

The African Arachnida Database (AFRAD) is a taxon database module developed to eventually contain information on all the Arachnida (non-Acari) species of Africa. Descriptive, behavioural and distributional data and images are added for each family and this information is now available on family, genus and species level as online fact sheets that can be accessed on the internet at http://www.arc.agric.za/arc-ppri/Pages/AFRAD/AFRAD-Homepage.aspx or Google ARC AFRAD.

The book is a product of the SANSA. What has this institute discovered so far in terms of spiders?

During the 16-year SANSA project an attempt has been made to consolidate all the available data on South African spiders into one database to determine the distribution ranges of species in South Africa. The information gathered is organised in a relational database (>80 000 entries) collating data from 22 institutions. As part of SANSA, a number of projects have been completed or are underway to determine the diversity of the arachnid fauna of South Africa. Some SANSA results:

If there are millions of spiders and spider species and they have survived since before the dinosaurs, why look after them now? Which spiders are actually endangered species?

Spiders as predators play a very important role as biological control agents. Especially now, when people want crops without pesticides, spiders have a role to play. We have started the red-listing process, but it is not yet completed. The most threatened species will probably be the baboon and trapdoor spiders, which can be affected by the pet trade and habitat destruction.

Which spiders are good to have in or around your house?

Where can one expect to find spiders?

Spiders are found everywhere. They are very well camouflaged and not easily seen. They are divided into the web dwellers and the wandering spiders.

The use of a web to capture prey is assumed to have developed long after spiders came into existence, and it took more than 200 million years for the first orb-web to appear. The great diversity in web types suggests that this strategy is very successful. The webs of spiders are highly specialised structures that might be considered an extension of the spider’s tactile sense organs. A great variety of webs are made such as orb-webs, sheet-webs, funnel-webs, retreat-webs, space-webs etc.

Wandering spiders are those spiders that do not use silk to capture prey, but actively roam around in search of prey, or which sit motionless waiting for prey – the ambushers. These hunters rely on the strength of their legs and venom to catch and kill their prey. They are collectively referred to as free-living wandering spiders and can be classified according to habitat preference as ground dwellers or plant dwellers. On the plants you get the grass dwellers, flower dwellers, bark dwellers and foliage dwellers.

Field Guide to the Spiders of South Africa is a fascinating book and can be read by anybody and everybody. Who is your ideal reader?

The purpose of this field guide is to enables the observer to identify some spiders in the field. One of the difficulties facing the spider-watcher is that a large number of the species are smaller than 5 mm, they are extremely well camouflaged and usually secretive by nature and therefore not easily seen. For most families you need a magnifying glass or microscope to be able to identify the specimen. However, with the photographs most of the field lovers will be able to identify some of the spiders they have seen in the veld. So it will be of value for both amateurs and scientists.

Why did you write this book in English? Are the terms used in the book also available in Afrikaans?

Due to the international interest the book was written in English. A previous book by LAPA,  Goggagids, was published in both Afrikaans and English, so some Afrikaans terminology will be available in that book.

Spiders are unique in that almost every family or genus has a different behaviour. Just looking at an orb-web that is spun every day gives you some idea of what to expect of a spider.