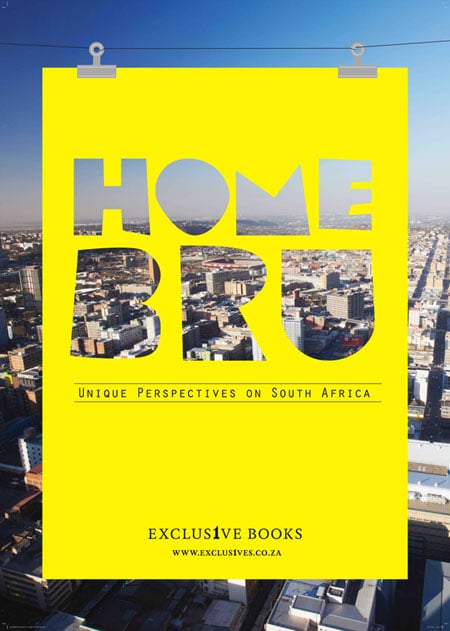 The Exclusive Books Homebru campaign is a pure celebration of South African writing and writers. The promotion runs from 1 May until 27 June 2012 and provides South African authors, both new and established, with their own platform to shine. “Homebru is about holding a mirror up to the SA publishing scene and this year is no different. The Homebru titles capture the deep and wide range of topics which captures the diversity and polarity of South Africa beautifully” says Rene Brophy, Marketing and Publicity Manager for Exclusive Books. There are 28 books on the Homebru list which represent 28 unique perspectives of South Africa including a strong representation of Afrikaans titles. Brophy comments, “there is currently a strong almost cultish following of Afrikaans books within the SA publishing world, and Homebru seeks to reflect that.”  From Sarel van der Merwe to Nadine Gordimer, Lolly Jackson to Riaan Cruywagen, the voices that can be heard reflect all of the contradiction and harmony in diversity that is South Africa.

The Last Rhinos by Lawrence Anthony and Graham Spence is the new rhino equivalent of the very popular Elephant Whisperer; Its topicality is sure to capture the imagination of SA readers. Rodriguez by Piet van Rooyen, author of the popular Etosha, is an epic novel about South Africa’s contentious past. Stoffel op Safari by Christiaan Bakkes is his latest collection of stories on the many facets of his life in the wilderness areas of Namibia: gripping and poignant adventures about animals, wild and tame, as well as interesting insights into people’s lives in the world of ecotourism.

Titles such as No Time Like The Present by the ‘Grande Dame’ of SA literature, Nadine Gordimer are balanced by lighter fare, such as Nicky & Lou by Nataniël. This is Nataniël’s latest zany collection of 46 stories, some in English and some in Afrikaans, selected and adapted from his shows staged since 2007, amongst others Predicting Snow, Men who Fly, Egg Whites and Angel Food, Coronation and Combat. They are magical stories about a world both strange and familiar. Wat’s Nuus by Riaan Cruywagen, is a humorous tell-all biography from South Africa’s most iconic and most parodied newsreader. A Week in The Kitchen by Karen Dudley is a gorgeous contemporary cook book that gives a glimpse into one week of The Kitchen, where menus change daily and South African twists on Mediterranean and Oriental tastes promise clean, natural flavours undisguised by rich sauces. Step on in to Karen’s Kitchen, and find out what it is that has publications such as The New York Times and personalities like Michelle Obama relishing their experience. Books that have been causing quite a stir on the Homebru list: 8 Days in September by Frank Chikane and Lolly Jackson: When Fantasy Becomes Reality by Sean Newman, Peter Piegl and Karyn Maughan which provides the reader with a fascinating view of a world that previously could only be imagined.

What started as advice to his own two children entering adulthood has turned into tweets for tens of thousands of followers who wait for his nuggets of advice on life, love and being a compassionate human being every day.  Letters To My Children by Jonathan Jansen (also available in Afrikaans), is a book of Jansen’s best ‘tweets to make you think’.

The annual European Union Literary Award also promotes new South African literature that speaks not only to South Africans, but also to an international audience. The Award has proved to be a driving force in uncovering new and talented South African fiction writers, with previous winners including James Clelland’s Deeper than Colour and the South African bestseller, Kopano Matlwa’s Coconut. This years winner is Ashraf Kagee, Khalil’s Journey which is published by Jacana, and it is the 29th title on Homebru.

“Homebru is our biggest and most important promotion. This year sees the 11th anniversary of the Homebru campaign and it has gone from strength to strength each year. We love supporting local talent and love to see South Africa buying local titles. The titles speak to daily life and interest, capturing the spirit of living in South Africa right now. The content is all about accessibility – this is not highbrow stuff of the past. We’re interested in life on the streets and in the hearts of the people” Brophy concluded. Exclusive Books will be offering Fanatics members 200 bonus points on any Homebru title purchase, as well as a chance to win a tour of your closest city.