I recently came across a blog post by The Guardian describing South African speculative fiction as the new Scandinavian crime fiction for British readers. Since the amazing success of Zoo City and Neill Blomkamp’s District 9, it seems that South African spec-fic is well and truly on the international map. 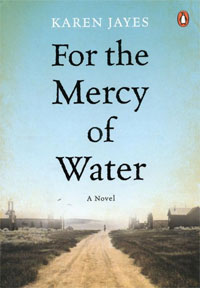 I feel I can only speak as far as speculative fiction goes – I’m afraid I’m going to have to pull an Atwood here (not because I don’t admire and respect sci-fi novels), but simply because I don’t consider For the Mercy of Water to be science fiction at all. My book is not really science fiction, more speculative, but not even speculative at all. It is set in the context of a water war and the clearing of villages of their inhabitants, based on the conquest of water sources by private companies. This is happening in much of the world already, out of the media lens − for example Yemen, where whole villages have been cleared and bands of people literally roam the desert landscape in search of water. In Afghanistan and India cooldrink and bottled water companies mine the water table to such an extent that villagers have no more water. And in South Africa the poor are constantly being rationed in their water use by social and economic factors as well as the privitisation of the water industry. There are not really any fantastical elements in the book, aside from the mystical quality of the natural landscape itself in all its profound and detailed beauty.

It’s hard to predict why readers read what they do, but as a reader myself, I enjoy fiction that acknowledges the realities of our world, takes certain paradigms that exist, and extends them  to create a believable new reality. Through this extension the writer raises questions about the way we are now, while also having some freedom to create beautiful imagery and intriguing, unusual characters. This balances the reading experience between the intellectual and the inspirational or entertaining. It’s this new reality that should challenge the existing one, while at the same time creating the escape that good fiction so richly aspires to do. I think South African readers appreciate this “brain-beauty” mix – it’s innately feminine … enjoyable while also packing bit of a punch.

Lauren Beukes set The Shining Girls in Chicago, stating that she wanted to separate the story from the politics of apartheid. Both Moxyland and Zoo City address very real social concerns in contemporary South Africa, including the plight of refugees, HIV/Aids and issues of segregation.  Karen, your book For the Mercy of Water deals with the threat to our planet’s natural resources, and When the Sea is Rising Red  (Cat Hellisen) also touches on the issue of economic segregation. Do you feel that the speculative space of SF&F allows us a lens to address the myriad of social, economic and environmental concerns that South Africans are faced with today? And can we do it without getting too entangled in the quagmire of apartheid politics and the old recriminations that go along with it?

Speculative fiction can acknowledge the realities that we are faced with in the world. I don’t think that we should see ourselves as nations any more. The issues South Africa has, we share with so many other countries, on many different levels. It’s important to embrace the universality of our living experience. Creating worlds which are separate from, but also a part of, our own is a way to acknowledge this, while also slipping neatly out of the apartheid noose in order to explore issues in a way that hooks readers at a purely human level.

Margaret Atwood once caused great outrage by insisting that she does not write science fiction, but rather speculative fiction. One can understand her reticence, given the rather bad reputation of SF as stories about slimy monsters chasing after girls in gold bikinis (sorry, Star Wars fans). You are all women writing in what has traditionally been a male-dominated genre, often accused of being low-brow escapism featuring flat, archetypal characters. How do you approach the challenge of writing well-rounded female characters (who are so often reduced to the roles of “the prize”, “the femme fatale” or “the wicked witch” in SF&F)? In short, how does one set about writing about real women (or people, for that matter) who just happen to occupy fantastic or alternative worlds?

I was very inspired by Atwood’s The Handmaid’s Tale, which I was also lucky enough to see translated as an opera in London. It was phenomenal how her hero was brought to life on the stage. As a writer in any genre you must write women as they exist in the world you know. The setting, paradigms and plot can change, but the characters always need to be complex and real and unusual. Readers have to care about them – and this dynamic depends a lot on the mind of the reader and their own experiences of women, but it rests largely on the shoulders of the writer to write women that feel as if they’re walking out of the page, no matter how fantastic or speculative their context. It’s that simple. You write characters that make mistakes, who regret, who try their best, and who sometimes aren’t heroes. Because that’s the way it is, whatever worlds they inhabit.

You represent an exciting new group of speculative authors in South Africa. Who else should we be reading?

Wall of Days
Margaret Atwood – The Year of the Flood.

You will be discussing “Dystopia in Science Fiction” at the upcoming Franschhoek Literary Festival (Click here to book your ticket). Give us a sneak peek into the themes you will be looking at.

I’m opening myself to spontaneity on that one. But I do think the books are interesting in terms of their metaphors, how all of them have taken different stances on presenting the “establishment”, or “system”, if you like, in different ways. I’d like to throw the idea out of this genre of fiction as a new sort of protest fiction, a kind of method for warning people what might happen if some of the current systems of governance and consumption are let be.

LitNet is launching their second annual science fiction-writing competition for high school learners soon. Any advice for those hoping to pen the prize-winning story?

A story is an argument with the world. Establish what your argument is. Then take the elements of your reality that feed your argument and extend them into rules, settings and plot turns that might plausibly happen in this new context. Write characters that you know. If you know your characters, you will love them, and not use them purely as puppets. Endow them with special capabilities and quirky traits, but in their core they must feel real, as must their battles. What your characters have to lose must resonate with your readers – they have to care about what happens to them, otherwise your story is lost, no matter how fantastic the setting and plot. Enjoy them – and readers will enjoy you.