A local neuroscientist from Pretoria, Karen Fitzgerald is one of the organisers of a conference that will be held in Gaborone, Botswana, which His Holiness the 14th Dalai Lama will attend. With this historic visit by the Dalai Lama, Botswana is his only planned destination in Africa.

It is a live public conference hosted by the Mind & Life Institute, and the theme is Botho/Ubuntu: A Dialogue on Spirituality, Science and Humanity. It brings African humanitarian and spiritual leaders, scholars and healers into conversation with the Dalai Lama and international neuroscientists about the African worldview of Botho/Ubuntu.

The three-day conference takes place between 17 and 19 August. Conference participants from the southern African region include renowned international human rights advocate Graça Machel and Pumla Gobodo-Madikizela, professor and research chair in historical trauma and transformation in the faculty of arts and social sciences, Stellenbosch University.

The public address on Saturday 19 August will include a musical performance by special guest, Vusi Mahlasela.

In short, could you tell us about yourself?

I am a PhD neuroscience student at UCT and I hope to complete my study on the functional and structural effects of meditation on novices' attention in the brain by the end of this year.

How are you involved?

I was the planner of this dialogue with the Dalai Lama in Botswana. I facilitated almost every aspect of the event, from appointing the event manager and organising logistics like site visits, to getting the permissions in place from the private office of His Holiness and from the government of Botswana, and selecting the African speakers taking part in the dialogue. Mind & Life has a long history of hosting such dialogues with the Dalai Lama, and I went to the very first public Mind & Life dialogue at MIT in 2003. It was there that I decided to become a neuroscientist, and to bring this dialogue format to Africa. Many international Mind & Life conferences and Mind & Life summer research schools later, we're finally here!

During our initial research with the Institute for Security Studies on possible African countries that could host such a dialogue, Botswana came out on top. Botswana did not only satisfy all of the selection criteria, but they also have a remarkable vision for their country (Vision 2036) that includes Botho, or as we know it, Ubuntu. In their view, Botho describes a well-rounded character, well-mannered, courteous and disciplined, who realises his or her full potential both as an individual and as part of the community to which he or she belongs. I admired this small nation's terrific dream of being the best and kindest human beings they could be. And since the very first moment I initiated discussions of this dialogue, I was received in such a warm and extraordinarily welcoming manner. It's been such an honour working with the Batswana on this project.

Briefly more about the topic?

It was always my intention to place Africa's unique view of what it means to be the best human being, which we call Botho or Ubuntu, on the same stage as the Tibetan views of interdependence, and to explore how this African concept of kindness leads to human flourishing. Whenever I attended Mind & Life conferences and dialogues in the USA, I felt that this way of African living was missing from these events. There is an authenticity and deeply felt strength knowing that one is part of an African community that I've never felt in the USA. So, I'm really proud to place Africa on an equal platform to the rest of the world's contemplative research stage.

How do neuroscience and something as esoteric as mindfulness gel?

Well, both methods are concerned with exploring the mind and the brain, and how to live a life that is good and healthy. Although the scientific method has generally developed from a third-person perspective, meaning that we look at the brain and the mind from an objective outside perspective, it has since its dialogue with the Dalai Lama and Buddhists included the first-person perspective. This is a huge and fundamental shift in how we understand the brain and life. As a neuroscientist, it is of no use to do research on the brain if you do not know your own mind. Mindfulness is a method of looking at your own mind. Neuroscience is a very young discipline in comparison with Buddhism, so these dialogues between science and Buddhism have been very useful to the development of neuroscience and psychology. Buddhism has an extraordinarily clear and detailed system of understanding emotions, how to cultivate those qualities that lead to happiness and how to counteract those emotions that lead to suffering.

What is the Mind & Life Institute and where are they based?

The Mind & Life Institute developed out of a friendship between the Dalai Lama and an accomplished Chilean biologist, Francisco Varela. The initial conversations were very small and private, and explored such fundamental principles as the biological nature of consciousness. The first public dialogue was in 2003 at the Massachusetts Institute of Technology in the USA, which I attended. So, Mind & Life has a long history of hosting these dialogues. They are based in Charlottesville in the USA. There is also a European Mind & Life based in Switzerland.

China has already complained. Is there a chance that this could scupper his visit?

I don't want to speak on behalf of the governments of Botswana or China. I am a scientist, not a diplomat. But I think it's quite ridiculous for one sovereign country to tell another sovereign country whom to welcome as guests and whom not. I mean, that's being a bully. I think this sort of behaviour only damages China, because everyone in the world sees them now as just a big bully. And from all my interactions with the Botswana government, I am sure that the proud Batswana will not be dictated to. China could make such a profound statement to the world if they were able to own up to bullying the Tibetans, and bullying everyone in Africa. I don't understand how they have no insight into their destructive behaviour.

For more information, visit the media section at: https://botswanadialogue.org/. 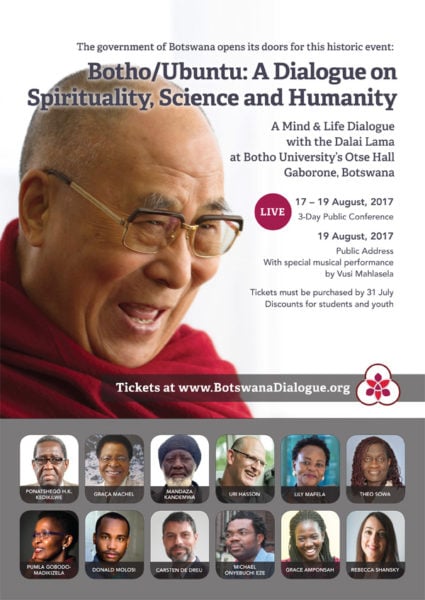