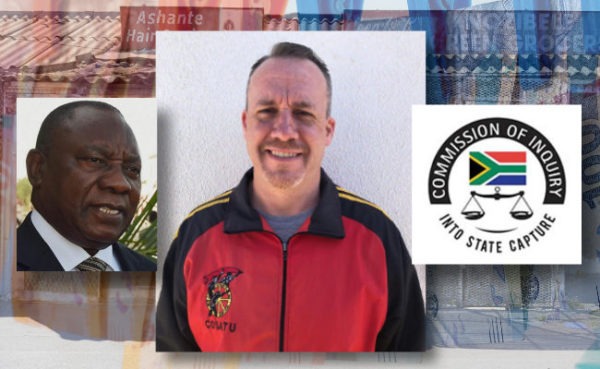 Corruption is the cancer eating at the very heart of South Africa’s fabric as a nation. It is causing the collapse of several government departments, dozens of municipalities, and key state-owned enterprises (SOEs). The impacts have affected every South African and sector of the economy.

It has reduced South Africa from the darling of the world and a role model for the rest of Africa in 1994 to a tragic and painful blot hanging over the head of every South African. It has threatened to destroy the African National Congress (ANC), a liberation movement that produced two Nobel Peace Prize winners, and one that even the mighty apartheid regime with its military muscle could not defeat.

South African Express and South African Airways, a mere 10 years ago, were winning international awards. Today, they have collapsed and seen more than 10 000 workers lose their wages, pensions and jobs.

Denel, once a leading arms manufacturer sought after by many countries, today tells its workers it can pay only 10% of their salaries, if anything at all.

SABC, with a dominant national and continental footprint, is now retrenching workers left, right and centre. Yet, they are still paying the executives who are doing the retrenching, salaries exceeding that of the president of the country!

Transnet and Eskom, with their multibillion procurement budgets, were the epicentres of state capture.

Load shedding has become an albatross around the neck of the economy when it can least afford it. During the peak of load shedding in 2019, it was costing the economy, on average, R13 billion in losses daily.

The mining industry is hanging by a thread as Eskom increases tariffs every year by double digit figures.

Eskom hangs on for dear life and needs the state to bail it out to survive another day. Its debt levels, at R424 billion, pose the greatest threat to the fiscus and national sovereignty.

COSATU drafted the now signed Eskom Social Compact. We have made proposals to help reduce Eskom’s unsustainable and dangerously out of control debt levels. These, however, are conditional upon the bleeding at Eskom to stop. We cannot help if looting is going to continue.

Corruption is not the sole preserve of the political elite. It’s a mass-based activity.

The Road Accident Fund has a deficit approaching R300 billion. This is largely due to road accident lawyers who have developed fleecing it into a fine art at the expense of the actual road accident claimants, who need every bit of help to pay medical bills and compensate for lost wages.

PRASA, on which millions of workers in the big cities depend to get to work cheaply, was stripped to such an extent during the lockdown that most of its lines are not operating. The rumours about inside jobs involving the security firms being paid millions to protect PRASA are countless.

South Africa exports more copper than it produces from mining. Where does it come from? Telkom and PRASA cables. Dedicated syndicates exist for stripping it. Scrap dealers don’t ask questions. The consequences? Not only billions lost for the state, and disruptions to the economy, but also lives lost when trains crash due to signals not working.

Workers’ pensions have been subject to repeated pilferage. The president was compelled to establish the Mpati Commission of Enquiry into the Public Investment Corporation in response to a flood of allegations that the Government Employee Pension Fund was being looted. Many of the investments that had been done by the leadership of the PIC were little short of money laundering and get-rich schemes for a well-connected elite.

Again, looting is not a monopoly of the state. Workers’ pensions, too, were stolen in Fidentia and Steinhoff.

The selection of councillors, especially ward councillors in informal areas, is often accompanied by violence. Not only are the ward councillors’ salaries the matter of interest, but also the patronage they are able to dispense in communities with very little economic opportunities and high levels of unemployment.

Provincial, regional and branch elective conferences of the ruling party, the ANC, have increasingly been accompanied by sophisticated degrees of factionalism, vote buying and violence. Why? Because a ruling party controls government resources.

Other political parties holding office in the state have not been immune to this cancer. The Democratic Alliance, the Economic Freedom Fighters and others have all been tainted by this cancer.

The current stand-off between the government and the Congress of South African Trade Unions (COSATU) on the public service wage bill is a consequence of the looting bonanza that threatens to collapse the fiscus.

The real cause of the fiscal crisis is that we lose 10% of R150 billion in the budget every year to corruption and wasteful expenditure. Billions are needed to bail out SOEs collapsing under the weight of corruption and mismanagement every year. Billions have been lost to tax and customs evasion and fraud as a result of the deliberate hollowing out of the South African Revenue Service during the era of state capture. Only 5% of goods coming through our ports are inspected for customs duties. This robs the state of revenue due and threatens local jobs and companies.

Yes, the burden, to a large extent, rests with the ANC. It has a choice: either to cleanse itself of the lecherous looters running amok throughout its structures – especially at a leadership level – or simply to die a painful death as voters abandon it.

We are at a crossroads. This is a matter that affects not only the ANC, but every single South African. Yes, the burden, to a large extent, rests with the ANC. It has a choice: either to cleanse itself of the lecherous looters running amok throughout its structures – especially at a leadership level – or simply to die a painful death as voters abandon it.

President Ramaphosa is perhaps uniquely placed to lead the ANC out of the Sinai Desert. However, this fight requires determination and brutal efficiency. Diplomacy does not work with criminals. If the president succeeds, voters will rally around and defend him.

This fight requires determination and brutal efficiency. Diplomacy does not work with criminals. If the president succeeds, voters will rally around and defend him.

What is missing to date is the leadership of the National Prosecuting Authority, the South African Police Service and the judiciary. Very few criminals have been charged, far fewer actually have their date in court, even fewer are convicted and fewer still end up in prison. Only a handful have seen their assets attached and returned to the state.

Millions have been spent on four commissions of enquiry into state capture and corruption. Yet, the law enforcement agencies have not moved an inch to charge a single soul.

While the president cannot constitutionally intervene in the running of the law enforcement agencies, he needs to read the riot act to their heads. Either they deliver, or they make way for those willing to do the job.

There are too many living examples of that painful reality – from the chaos of Zimbabwe, to the failed state of Somalia, the dominant narco cartels in Mexico and the perpetual debt defaults of Argentina.

This is not a fight South Africa can afford to shirk. The alternative is to continue to wander down the road of decay, mediocrity and collapse. There are too many living examples of that painful reality – from the chaos of Zimbabwe, to the failed state of Somalia, the dominant narco cartels in Mexico and the perpetual debt defaults of Argentina.

The choice is ours. The solution is in our hands. It just requires courage and action – not platitudes, bosberaads and commissions.