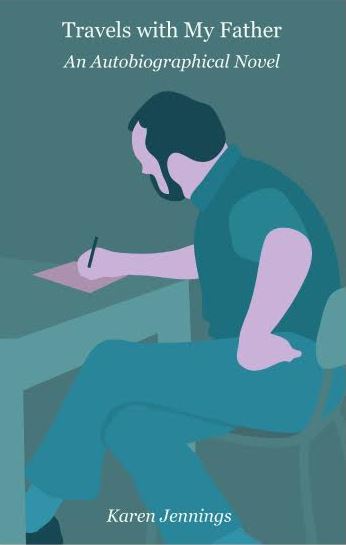 Award-winning author Karen Jennings is well-known for her poetry, short stories, editing and the novel Finding Soutbek (2012). Her new book, Travels with my father: An autobiographical novel (2016), is a sophisticated and sensitively written story which makes us contemplate the nature of loss, grief and love. It traces a daughter’s attempts to come to terms with these issues through artistic expression.

The narrator, Karen, takes the reader on a reflective journey prompted by the death of her father, Keith Jennings, after a long battle with cancer. At the heart of the autobiographical project then lies a patriography: a struggle to write the father. The figure of the father has been a prolific subject in literature, and in narratives by South African authors a notably contentious, prickly subject, but Jennings eloquently negotiates this challenging terrain to present a sensitive reconstruction of a father, one without malice, who questions the self and contemplates the complexities of a new relationship – in this case with Juliano, the man Karen falls in love with “six months after [her] father’s death” (9). It is a painfully honest narration with moments of understated humour.

Immersed in her recollection of Keith – a former English teacher – is a matrix of remembrance and philosophical thought informed by history, politics, genealogy, literature, objects, places and other tales of grandeur, sadness and death – all woven together through the motif of travel. We accompany Karen on her visits to sites in Cape Town and other places on the globe: Tasmania, India, the Netherlands, Austria, Italy, Russia, Uganda and Brazil (many visited as writer in residence). In turn, we learn about Keith’s own journeys and what he taught his daughter through stories and his interest in literature, culture and history. In this way, the narrative spins a web across time and space to show how lives, from near and far, intersect in the most ordinary and extraordinary ways. Not once does Jennings lose sight of the troubled histories of places and people. She draws on an astonishing array of private and secondary materials to recreate her subjects and give ambience to contexts.

Permeating this exquisite travelogue, then, is the spectre of the father, a presence that drives home a realisation of the finality of death and prompts reflection on the countless manners in which we remember, grieve over, honour or fail to honour the dead. And for that matter, treat the living. Tales of ghostly figures and haunted places abound in the narrative. These rich details make it at once a haunted and hauntingly beautiful story.

In one of my favourite moments (and there are too many to include here), Karen and Juliano take a trip to Hout Bay the day before her birthday. They sit overlooking the harbour while eating ice cream. She recalls how Keith, his body ravaged by chemotherapy, struggled to eat anything but ice cream towards the end. Any reader who has lost a loved one will be able to identify with this description: “Something as small as this – the taste of gelato, the smell of salt in the air – returns my father to me. It is as though he is sitting beside me, and I feel an urge to turn towards him and say hello” (130).

Structurally the narrative is divided into six parts, each reminiscent of a stage of grieving, following chronological time that leads to a level of self-understanding, albeit still marred by doubt about the future, but because Jennings works with memory (literal and mental travel), the story is not strictly linear. After all, remembering is a murky and fragmented business, and the more so when one consciously attempts to forge a cohesive narrative from it. Of this, Jennings is cogently aware, as she poignantly informs us: “When people ask me how the book is going, I tell them that I am in a ‘thinking phase’ or just say ‘it’s fine’. I am tired of having to think of my father every day in this way. Of having to trawl through the past and imbue everything with meaning” (95). Later she says, “It is difficult to separate what is alive from what is dead, what is false from what is true. We are all guilty of it: dismantling the past, trying to create something new, something we considered to be an improvement. Even in this book there are memories I have created from the rubble of others” (114).

It is precisely this skilful weaving of the rubble of others' memories that compels me not to reveal too much about the content of the book. It has to be read. This is the only way to appreciate the nuances of Jennings’s exquisite craftsmanship. As someone with a keen interest in life writing and travel writing, I have been waiting for this is book for a long time, precisely because the author so skilfully challenges problematic conventions in these fields and, as the title signals, weaves a story that escapes neat generic categorisation. For instance, while on her visit to Uganda, Karen takes a trip “to the tourist attraction of the source of the Nile” (127). A boatman, Isaac, ferries her to “the small island” with its curio hut to see the site:

I exit the hut through the other door, directly into the lake. A round blue sign in the water identifies what is claimed to be the source of the Nile. I stand beside it, hold up my camera and take a photo of myself hastily as a noisy Indian family approaches, pushing me to the side. I lean against the wall of the gift shop, beneath a sign that warns of fines for urinating. I watch the water, unable to distinguish between Lake Victoria, the source or the Nile itself. All appears the same to me, water, expanding out, north, south, east and west. I look down at my camera. The screen shows the photo I have just taken beside the blue sign. I aimed poorly. I am not in the frame. Only in the bottom right-hand corner, a strand of my hair, blowing, and in the distance, water and water. (128)

There is no conquering or exoticising gaze in this moment, unlike those that proliferate in travel narratives about this history-laden site. Here is bare honesty, drawing attention to the fleetingness of one’s own existence and the futility, the heartaches and dangers even, of efforts to frame and claim what cannot be distinctly fixed.

While reading, I found that I was gradually slowing down my pace to savour the beauty of each phrase. I became like Milly, described in one of the family anecdotes as someone who “ate excruciatingly slowly. So slowly that everyone else would be eating their dessert while she was still busy on her soup” (131). For me, this book is an unsparing quest for meaning on so many levels and one certainly deserving of the highest accolades.