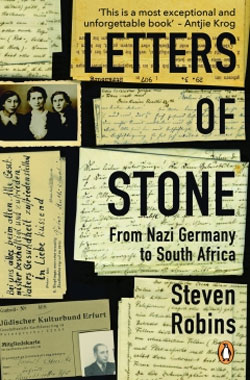 Reading about the Holocaust is never easy. Facing its terrible truths, especially when your own family is involved, is heroic.

Anthropologist Steven Robins had no inkling of what he would unearth when he embarked on a quest to discover more about the three women in an old photograph that had sat in his childhood home for years. He was born in 1959 in Port Elizabeth. He and his brother Michael grew up oblivious to their Polish and German ancestry and to the fates of their father’s relatives during the Third Reich.

The journey Robins takes in Letters of stone connects “different times and places”. It is a journey that took nearly three decades to complete – between the time Robins interviewed his father in Port Elizabeth in 1989 and the publication of this astounding book. To begin with, Robins had very little to go on. But a series of uncanny coincidences led him further into the labyrinth of the private history of his family, and beyond.

Robins realises that he has been living around silences. That it was high time to broach them. In his attempts to understand his father and his own background, he stumbles upon artefacts and stories which he pieces together into a dramatic saga. Though his story begins in South Africa, it tracks back to Germany of the 1930s and Hitler’s rise to power, and the family he never knew of: his grandparents, aunts, and cousins. During his research he comes across fascinating people and historical links, a haunting exhibition, more photographs, a most unusual book published in South America, and a remarkable correspondence. The letters he finds addressed to his father, over half a century old, break those silences open and the truth tumbles out.

What makes this account so fascinating, and infinitely moving, is the author’s ability to interweave his professional and personal lives to reach a more universal and timeless truth. He shows how drastic socio-political changes can creep up on us unnoticed before it is too late to save oneself. Laws, slogans and attitudes can shift and take over the everyday, stripping away our human rights and dignity. The possibility of the gas chambers must have seemed incredulous to most people in the 1930s, but they were the ultimate consequence of all these greater or lesser waves of change: “It is disturbing what lies beneath these short, disjointed statements tucked in between the ordinary.”

The relevance of this moving family story to contemporary South Africa and other parts of the world cannot be overstated: economic crises, racial tensions, war zones and the resulting worldwide migrations are threats not only to the everyday lives of the people directly affected, but to all of us. It is of the utmost importance to understand such historical shifts, and Letters of stone gives us an incisive insight into their impact on individual lives. We don’t learn from history, as the old adage goes, but the past has a tendency “to leak uncontrollably into” our present and we need to acknowledge its warnings. History repeats itself, traumas linger across generations.

“Bei uns alles beim alten,” it says on the front cover of the book. “Otherwise everything is as usual” (Berlin, 1 December 1938) – it is a phrase from one of the letters family members sent to Robins’s father who had miraculously managed to escape from Germany to South Africa just before the war. He quotes extensively from these delicate personal documents, written in fear of censorship and prosecution. The reassuring message is often repeated, and yet today we know that this is Nazi Germany, the correspondents are Jews, and nothing really is or ever will be “as usual” anymore.

The world is breaking apart, humanity is once again on the verge of committing unspeakable acts of horror. As the dates of the letters approach September 1939 and the outbreak of Second World War, one’s heart sinks. At this stage in the book, we have come to know the protagonists well, we know what the near future has in store for them, and yet we cannot help hoping against hope. It is heart-wrenching to witness. And yet we must; we owe at least this much to the dead.

During the TRC hearings the significance of knowing how and where one’s loved ones had perished, where their bodies lay, was highly prominent. Families needed to find, bury, and commemorate the victims of the brutal regime. In a sense, this is what Robins is doing in Letters of stone. He listens to his ancestors, interrogates history on their behalf, and finally assists in placing so-called Stolpersteine, individual cobblestone-sized memorials with names of Nazi victims, in Berlin to honour his family members who died in the Holocaust.

Letters of stone is a monument to a story which refused to be forgotten. Even if most of the people concerned are dead, their voices have been heard across time and continents to remind us how precariously fragile our ideas of freedom and human rights can be, how every life is a story to be cherished.