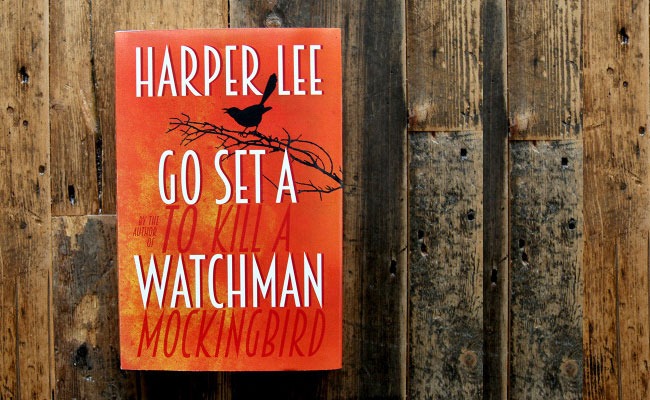 “It is what it is, says love” is a phrase from a poem by the Austrian poet Erich Fried which echoed in my head while I was reading Harper Lee’s highly anticipated Go Set a Watchman. Published decades after her Pulitzer Prize-winning, internationally bestselling To Kill a Mockingbird (1960), Lee’s only other novel to date, no matter what its merits or lack thereof, Go Set a Watchman is a literary milestone.

How the two books relate to each other reminds one of the ancient question about which came first: the chicken or the egg. It’s complicated. Or not? Although first to be published, To Kill a Mockingbird was written after Go Set a Watchman. Both tell the story of the Finch family, but they are set twenty years apart. In the late 1950s, Harper Lee was told by an editor who saw the manuscript of Go Set a Watchman, where the main characters are all grown up but frequently return in their memories of an earlier time throughout the book, to rework it to focus on those childhood stories. This rewrite became To Kill a Mockingbird. Without any doubt there are good reasons why the initial book hasn’t seen the light of the published page until now. And all kudos to the editor who saw its potential back then and challenged Lee to write another novel which millions of readers across the world have come to love over the last half a century.

My personal love affair with To Kill a Mockingbird began in grade 8. I still have my school copy of the novel with a dust jacket I designed for it myself. It is one of only a handful of books which travelled with me across three continents to settle in Cape Town. I mention this to emphasise the important part that the tale of the siblings, Scout and Jem, and their wonderful father, Atticus Finch, plays in my life. Full of wisdom and tenderness, beautifully written, poignant and funny, the richly layered To Kill a Mockingbird is a true classic. It is set in the imagined county of Maycomb in Alabama of the 1930s. Through Scout’s innocent eyes, it tells the story of her and her brother’s fascination with their reclusive neighbour, Boo Radley, and their father’s fight for fairness for a black man accused of raping a white woman in the Jim Crow South. The children learn that it’s easy to fear what you do not understand and that more often than not law has very little to do with justice. But what they also discover is that there are certain things in life worth fighting for.

When I reread the novel recently, my love of it was reaffirmed. And when you love something so much, it is easy to have your heart broken if somebody tampers with it in ways which are uncomfortably unpredictable.

Despite its enormous success, To Kill a Mockingbird has been dogged by controversy since its publication. Rumours that Truman Capote, Lee’s childhood friend, authored the book abounded and accusations of racism as well as too explicit handling of rape have been levelled at it. As a consequence, the book has been repeatedly challenged as inappropriate for libraries and schools. The arrival of Go Set a Watchman was also marred by rumours that Lee, now 89, was coerced by her lawyer into publishing the manuscript. I read the novel on the assumption that both books were written by Lee, and that she was as clear about her motives for publishing Go Set a Watchman in 2015 as she was in 1960 with To Kill a Mockingbird.

A few days before the official release of Go Set a Watchman in mid-July, the Guardian published its first chapter. Like everyone else, I read it with bated breath. It is set twenty years after the events of To Kill a Mockingbird and Jean Louise (no longer called by her childhood nickname Scout) returns from New York to Maycomb for a holiday with her father, her Aunt Alexandra, and Hank Clinton, her oldest and only friend, who is eager to marry her. We learn that Jem “dropped dead in his tracks one day” and read the line over and over again to make sure that we hadn’t misunderstood. Jean Louise comes across a sassy young woman with a mind of her own. Already in the first chapter it becomes apparent that the prose is not as supple as in the other book, and apart from a few flashes of poetic beauty the rest of the novel continues in a similar vein. Most reviewers picked up on the flaw in the wake of the publication. It was followed by a flurry of outrage about the portrayal of Atticus as an unapologetic racist and of praise for his grown-up daughter, now defending the moral high ground held by her father in the other book.

However, the portrayal of both characters is much more complex and ambiguous than that. One must also bear in mind that in Go Set a Watchman Atticus has actually “won an acquittal for a coloured boy on a rape charge. The chief witness for the prosecution was a white girl.” The vision is much darker and closer to 1930s reality in To Kill a Mockingbird, where the black man is sentenced and killed as he tries to escape from prison.

At the end of To Kill a Mockingbird Scout sees Boo Radley for who he really is and tells her father that their mysterious neighbour “was truly nice”, to which Atticus responds: “Most people are, Scout, when you finally see them.” And yet, when she realises in Go Set a Watchman that her father whom she had always trusted “fully and wholeheartedly”, attends a meeting of the citizens’ council (ie the Klan) where crass views in favour of continued segregation are expressed by a speaker, she is quick to judge and condemn him as a racist and bigot (later adding “coward as well as a snob and a tyrant” and “son of a bitch” to the list) without hearing his side of the story. Blinded by disillusionment and indignation, she jumps to conclusions. All that Atticus has for her in return is respect, pride and love. He is proud of her independence of opinion, no matter how painful it might be to him. And although they reconcile, and agree to disagree, she never truly listens to what he has to say in his defence.

If one reads carefully, one discovers that the attitudes Atticus exemplifies in the book are not that different from their other incarnation. They are far from perfect, but nothing more or less than what a man of his age and experience would have thought and felt at the time: “I’m seventy-two years old, but I’m still open to suggestions,” he says. And as his brother astutely points out: “When a man’s looking down the double barrel of a shotgun, he picks up the first weapon he can find to defend himself, be it a stone or a stick of stovewood or a citizens’ council.” It is made clear that Atticus joins the Klan only to attend one meeting and find out who the citizens are behind the masks. Hank also begs Jean Louise “not to judge him unless you know his motives” and he tries to make her understand that sometimes people have to “conform to certain demands of the community they live in simply so that they can be of service to it”.

On the other hand, although it is stated several times that Jean-Louise is colour blind and opposes segregation laws as such, she still assures her uncle that she doesn’t “especially want to run out and marry a Negro or something”. Her uncle’s observation, “you haven’t looked … You’ve never opened your eyes”, might be more accurate. He also sees that although she has been born with her own conscience, “somewhere along the line [you] fastened it like a barnacle onto your father’s … you confused your father with God. You never saw him as a man with a man’s heart, and a man’s feelings.” He points out to her how much she is like her father, “except you’re a bigot and he’s not”.

But it seems that in the end Jean-Louise learns that “every man’s watchman … is his conscience” (the reference and the title come from the Bible: “For thus hath the Lord said unto me,/ Go, set a watchman, let him declare what he seeth” – Isaiah 21:6) and growing up is like becoming used to getting into a new car: you have to be careful not to bump your head.

One must remember that these books are a product of their time, no matter how progressive some of the ideas they grapple with might be. And yet, they are also not obsolete to contemporary audiences. The central conflict portrayed here might be uncannily familiar to many white South Africans who grew up in conservative families and rebelled against their loved ones’ support of apartheid. Thinking of the still prevailing racial prejudices and tensions in South Africa, or of the recent mass shooting at a church in Charleston, South Carolina in the United States, one cannot help acknowledging that both novels are still of great relevance today. “As sure as time, history is repeating itself, and as sure as a man is a man, history is the last place he’ll look for his lessons.”

Go Set a Watchman reads like the study for a book, which strictly speaking it is. Despite a copy-edit of the old manuscript, the characters are only ghosts of their other full-bodied selves, most dialogues are stilted, the descriptive passages are much poorer in comparison, and the socio-political polemics much less subtle, to the extent of being terribly preachy at times. And yet, the novel definitely holds the promise that To Kill a Mockingbird delivered. There are moments of delightful humour, short stunning portrayals of minor characters, moving encounters between Atticus and his kids, and other flashbacks to Scout’s and Jem’s younger days which are full of the customary charm.

Go Set a Watchman must be seen for what it is, a once discarded manuscript that is historically of enormous literary value as a long-lost cousin of its brilliant relative. Read as a companion book, it enhances one’s appreciation of To Kill a Mockingbird and offers a glimpse into an otherwise unknowable future. It is what it is, says a bibliophile.