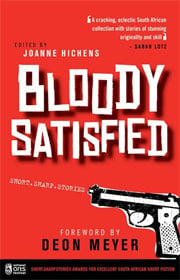 Back in 2008, “stories of intrigue, suspense and thrills” appeared under the banner of Bad Company, a collection of short stories under the wide rubric of crime fiction compiled and edited by Joanne Hichens. All of the seventeen contributors (including Deon Meyer, Margie Orford, Richard Kunzmann, and Jassy Mackenzie) each put forward a crime-tinged spin on the short story, with mostly memorable, menacing results.

Among the most striking of these stories were Meyer’s “The Nostradamus Document”, “Louis Botha Avenue” by David Dison, Mackenzie’s “The Beginning”, “Occam’s Razor” by Andrew Brown, Tim Keegan’s “What Molly Knew”, “The Love of Money” by Meshack Masondo, and especially Joanne Hichens’s “Sweet Life”. On the whole, the collection voiced a variety of impressions related to our highly stratified, crime-ridden society, beset with various fears and anxieties, mixing acute social commentary with playful riffs on familiar genre tropes and styles.

Five years later, in 2013, Hichens has once again edited and collected various storytelling voices under the title Bloody Satisfied: short.sharp.stories. The collection is the inaugural anthology produced in conjunction with the National Arts Festival. The biggest difference this time around is that the writers are not all crime writers by trade. For some, this is their first attempt at writing within the parameters of the genre.

Instead of seventeen established voices telling their stories we now get a whopping twenty-four, and the stories come in at over 300 pages, a meaty collection by most people’s standards. But more importantly: Will you be bloody satisfied after reading these stories?

In short, yes. The stories might not all be bloody, and some of them aren’t even all that satisfying – opting for open-endedness rather than clear resolution and order. What they do share is a telling ability to conjoin the general with the particular: these are crime stories from a local perspective, with international appeal and universal significance, on South Africa, now.

After a foreword by Deon Meyer and introduction by Joanne Hichens, the collection kicks off in particularly stylish, confident fashion with Jill Morsbach’s “The Perfect Murder”. In a classic metafictional twist-and-turn extravaganza, Morsbach pits the couple Roscoe and Loretta head to head in a battle to see who can off the other first, while pretending that all is hunky dory. It’s tons of fun to read, and doesn’t take itself too seriously. A cracking start, then.

Siphiwo Mahala’s “Robbed by a Mad White Man” is up next, one of the funniest and most original entries in the collection. It’s also one of many with its roots in actual experience by the writer. A winner.

“My Side” by Peter Church is the first (but only one of many) stories to deal with domestic abuse, but not necessarily in the way you might expect. Church cleverly works from a certain perspective, only to pull the rug from under his protagonist (and the reader) later. Ultimately chilling and consistent in its telling power.

Roger Smith is arguably the most bad-ass of our local crime writers. He just never seems to go easy on his readers, even for a second. Reading his work means travelling down the darkest, bloodiest noir highways and byways, and “Falling” sees him operating at the top of his game. As gritty and gripping as it gets!

The winner of the Best Story Award is “What To Do About Ricky” by Dawn Garisch. I had to read this story a couple of times to appreciate its note-perfect channelling of character, disaffection, offbeat humour, and quirky mood. It’s a deceptively slow-burning gem, and a deserving winner.

“Demon in the DNA” by Anirood Singh is arguably the most ambitious of all the stories in the collection. It covers a criss-crossing Bonnie-and-Clyde-like couple on a killing spree and the unexpected consequences of their actions. The story flits between different periods, and the effect can be more dizzying than dazzling at times. Still, the story is strong, and it rarely lets its tight grip slip, despite being fairly long.

A crime story with a difference, my personal favourite is without question Nechama Brodie’s “Feet of Clay”. Instead of a tokoloshe in the familiar sense, Brodie introduces a collective of children and the conjuring of a golem, something with which Jewish readers in particular will be familiar. The storytelling is effervescent and involving, the detail minute and finely textured, and the tone pitch perfect. A loss of innocence chronicled with feeling.

Jo Stielau’s “A Dog before Nine” is an atmospheric slice of tension that explores the aftermath of a most personal kind of crime. Punchy, edgy, pithy, a real kick in the teeth.

“Death of a Critic” by Peter Merrington is one of the stories with the most international, classic feel, a modern throwback to the stories that Agatha Christie wrote with consummate skill. Merrington manages to wring substantial amusement and plenty of laughs from his premise, and his playfulness and verve never cross over into outright silliness.

A kind of centrepiece to the collection, and a very different kind of crime story, is “Mapping the Interior”, by duo Greg Lazarus. Gothic in content and mood, this tale of wrongdoings in the 18th-century Cape is original, involving and psychologically rich. Another favourite.

“The King” by TO Molefe and “Honey Trap at a Funeral” by Sandile Memela are two of the strongest contributions by African writers. The former has a plot rather ingenious and so original that you can’t help but smile. Memela’s story is a riff on the Jacob Zuma rape case, both provocative and evocative, a prime example of the capacity of crime fiction to make sense of a variety of socio-political issues. Very impressive and not a little disquieting.

Colin Ward’s “Justice” is perhaps one of the weaker stories here, mainly due to its nagging sense of familiarity in the way it deals with vigilantism. Although not without merit, and rather atmospheric, it pales in comparison with the hard-hitting “On Appeal” by Mncedise Thambe, which follows directly after. Thambe has a visceral, lacerating story to tell about wrongful incarceration, and it all but bleeds off the page. Superb.

Former judge Chris Nicholson taps into sexualised anxieties with aplomb in “The Old Goat Eats the Young Leaves”, bringing a stirring example from the biblical book of Daniel to bear on a case again dealing with the frolicking habits of an older male. The story is fresh and fun and filled with illuminating allusions. Bound to be a reader’s favourite.
Beth Hunt’s “Tree Money” is a worthy attempt at moral allegory, but the writing itself falls short of the weight it aspires to. Nonetheless, a commendable case study in that it reveals the difficulty of writing narratives about rape without being sensationalist.

Directly successive is Amy Heydenrych’s “The First Case of the Year”, also about rape. Here, with rather a sense of distance between event and narration, the writing manages to convey a palpable air of dread and fear on behalf of the girl, first victim then survivor; and the way that race and class are subtly tackled is admirable. Acutely judged and edited, too.

Dealing with poaching, Melissa Siebert’s “The Rogues” is, somewhat like “Tree Money”, a case of a story collapsing under the weight of its subject matter. Some worrying stereotyping about “most men” aside, the moral of the story is captivating nevertheless, and it is briskly paced.

“41” by Anthony Ehlers is dark, claustrophobic, utterly gripping crime fiction in the Patricia Highsmith mould, and by far the most suspenseful of the stories on offer. Ehlers wrings every last drop of sour agony from the story of his protagonist, and takes the reader on an enthralling emotional roller coaster ride. Not for the faint of heart, and as disturbing as the best psychological thrillers. An ace effort.

Andrew Salomon’s “A Beautiful Partnership” moves things along nicely with a cunning little tale that explicates the old saying that there is no honour among thieves. A lekker short and sharp story.

The politics of fear and the burden of responsibility take fearsome shape in Luke Fiske’s formidable “Do You Know What a Leader Is?”. The less said about this short story the better, lest I ruin its impact, but I can say that it’s a road narrative that goes into very interesting places, dark, brooding and off kilter.

Operating in the umbra of Brett Kebble’s “assisted suicide”, Yewande Omotoso writes with icy conviction and impressive emotional register in “To Die For”. Another punch to the gut that exploits the dialectic between fact and fiction to maximum impression, bringing a striking variation to the notion of the moral dilemma to the party.

Megan Furniss displays an exciting willingness to experiment by presenting a Crash-like offering that traces various different episodes of crime as they play out in real time. One of the most original efforts and, for the most part, truly engaging and convincingly done.

Liam Kruger’s “The Simple Art” is the final story in the collection, and is a wise choice to end the book on a real high. All I can say is that Kruger came upon a devilishly good idea, and executes it to high heavens. Comparable in its bite and brio to Joanne Hichens’s “Sweet Life”, the final story in Bad Company, “The Simple Art” is Bloody Satisfied’s “ripping good yarn”.

What is inevitable with such a collection is that every reader will have his or her favourites, and value certain stories more highly than others due to the issues on offer as well as the quality and qualities of the writing. What is also certain, however, is that Bloody Satisfied fulfils its mandate superbly – its “short, sharp stories” are topical, clever, accessible and varied, as much a thrilling adrenaline rush as a strident confirmation that our writers, as much as our citizens, are unyieldingly fascinated by crime, in all of its many guises.