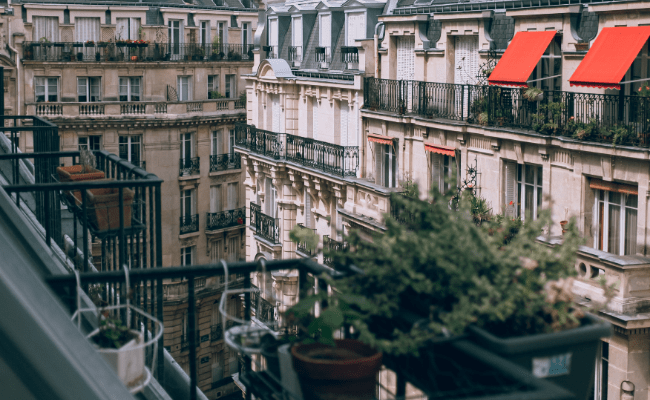 We lived on the sixth floor, just beneath the roof, on the rue des Écoles, very near the Notre Dame cathedral. The rooms were ludicrously, comically tiny, but as we were on the top floor we did have the benefit of narrow double doors that led onto little balconies. That was where I went for cigarette breaks, taking in the sight of Parisian roofs and the sound of the traffic below.

About a week after my arrival I met my neighbour, who was having his own cigarette on his own balcony. We were close enough to conduct a conversation without needing to raise our voices. We nodded hello and said bonjour. My neighbour was Sašo, from Macedonia. He was five years older than me, completing a doctorate in Physics at a grande école much grander than my own.

Sašo regarded everyone with introverted irony, curiosity; he engaged in conversation politely and soft-spoken. He possessed a coldness that made it hard to get close to him. He was not unfriendly; on the contrary, it was his very politeness that made him hard to know. It was all very civilised.

A few weeks later, Sašo invited me to go out with him for a drink. We walked past the cathedral on our way to a small bar in the Marais, and he asked me to hang on for a minute while he stepped inside. This would have been sometime in January; there was still much ice on the ground, so I went inside with him to get out of the cold. He did not genuflect; instead he walked over to the stand with the votive candles, lit one, watched it for half a minute, and then re-joined me at the door.

Are you catholic? I asked. He smiled and said yes, he’s catholic. I asked if he believed in God, and he said God no, and smiled again. But his mother does, he said, lighting a cigarette, and she was having her sixtieth birthday dinner in Skopje that same evening, and so the candle was for her. I thought it was touching; the Macedonian was interesting.

Later that evening I watched him dance with a friend of his, to the strange rhythm of Grace Jones singing “I’ve seen that face before”. I did not join them; instead, I sipped cider from a bowl, smoked a Gauloises Bleu, smiled at the whimsical, kitsch sentimentality of it all, and felt continental.

Sašo’s friend had to leave, gave him a kiss on the lips, collected his coat and nodded au revoir to me. Sašo sat down at our little table and regarded me. You don’t dance? he asked, and I said no, I would need to drink much more cider before I do that. Sašo looked around the bar and said he sometimes came there to relax, on weekends. It was not exclusively a gay bar, but because it was in the Marais, most of the clientele was tolerant or, rather, indifferent.

I asked him if the man he’d danced with was his boyfriend, and he answered that his friend was no boy. (In fact, in French he said his ami was not “petit”, deploying a rather pat French pun). Sašo then turned serious, his polite mask was back in place, and he told me that the person he most loved had remained behind in Skopje. In fact, a year ago this man got married, and Sašo was his best man.

His friend back in Skopje was not gay, Sašo pointed out. They’d grown up together in one of the poorer parts of the city. His friend’s name was also Alexander, like his own first name – “sašo” is an endearment, the diminutive of the full name. Alex and Sašo were the same age, and Alex protected Sašo from bullies at school. Sašo had always loved Alex, but Alex was not into boys. Sašo did not mind that so much; all he needed was to be in Alex’s company to be happy.

On the day of Alex’s wedding, though, as they were whiling away the last hour before the ceremony, Alex looked at Sašo and told him that he so hoped that Sašo too would find someone he could be with forever, and be happy as he was going to be with his wife. It was not necessary for Alex to name the thing between them. Sašo appreciated this – the decorum, the subtlety, the kindness. He told Alex that the closest he came to having that was when they wrestled, as boys. Alex smiled, considered this for a moment, and pointed out that if they weren’t already wearing their wedding suits, maybe they could have wrestled one last time.

In Paris at midday on a day in May we emerged from the métro at the Place Maubert. In that tiny square the Huguenots were burned at the stake, I’d read, and I remarked to him that the screams must have been awful. Not over the cheers, he pointed out. We bought tulips and salmon pink ranunculi (no – peachy watermelon, he corrected, regarding the hue), and at the corner cheese shop he selected mascarpone, to have in his coffee, as was his custom. You’re a in dark mood, I said. Crepuscular, rather, he said upon reflection, then winked and pecked me on the cheek. In Paris it is fashionable to be a little dark, he said. The spring was late and there were sparrows, and near the corner a gypsy couple were dancing in the street: he in a suit, she in high heels, with a hat, faces glistening. And I knew that I was loved, and life was so fresh, and I still had so much of it ahead of me.

My Macedonian friend suggested that we say farewell where we’d first noticed each other – outside our building, on the corner of the rue Valette and the rue des Écoles. He ordered a coffee and smiled at my hot chocolate, which was my inevitable drink, as it had been on that first day. We didn’t say much; we said everything. He picked a speck of tobacco from his lip and passed me the cigarette. Let’s go see the pendulum, he suggested, and we walked in silence towards the Panthéon nearby. We went inside, pragmatically, for the heat. The space of this place always gets me, I said, to say something rather than nothing, looking up into the dome. We watched the slow swing of the thing, and he said, so softly that I had to translate the sentence in my mind to understand, he said ah, isn’t it a pity that we never slept together. I nodded. I was embarrassed, and he turned towards me and touched my face briefly with the back of his hand. It’s my fault, he said, reflecting. As the older man I should have taken the lead, he added. I needed a joke. I smiled, and said that there are hours yet, before my flight, to rectify the situation. It wasn’t true; it was all behind us.