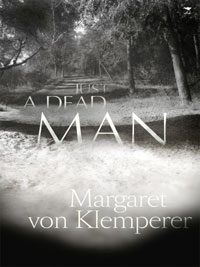 Click here to buy a copy of Just a Dead Man from Kalahari.com

Margaret von Klemperer, long-time arts editor, book reviewer and journalist for KZN's The Witness newspaper, stretches her creative wings in her debut novel, Just a Dead Man. It is a classic whodunit, more Agatha Christie than Margie Orford in its style.

Not as dark and brutal as many of the murder/mystery novels emerging from our country at the moment, Just a Dead Man centres around an ordinary art teacher who finds herself in the middle of a murder investigation when a body is found on a path just outside her home.

Laura Marsh is your average working mother who has been through a messy divorce and whose main aim in life is to keep her two sons and her home together while trying to do her best in her chosen profession. She's not aggressively ambitious, but plods along quietly with her paintings, working towards an exhibition at some point. She tries not to brood about her ex-husband's new wife, whose surgically improved assets rankle her somewhat, but she's not above a bitchy barb about the superficial "Mrs Tits".

When her good friend Daniel Moyo finds a dead body on a path outside her house on his way to visiting her, Laura becomes embroiled in a murder-investigation and Daniel becomes a prime suspect in the case – especially when it comes to light that both Daniel and the murder victim had been interested in the history of the SS Mendi, a troop carrier in the First World War that sank in the English Channel and drowned black soldiers from South Africa who were on their way to fight for the Allies in France. These soldiers had been unceremoniously forgotten and Daniel was tracking down the relatives of the soldiers lost at sea.

The plot thickens when Laura remembers seeing a bakkie used as a hearse close to the scene of the crime.

This is a delightful read, light yet intelligent. It’s gripping in its page-turning sequence of events and not too gory to enjoy as a weekend or holiday read. Von Klemperer has managed to bridge the gap between intelligent murder-mystery storytelling and entertainment – a feat of note. Her characters are believable and real enough for you to feel as if you'd just spent the morning having coffee with them. The setting is tangible and it's delightful to read a novel set in my current home town.

I recommend this novel highly as a possible stocking-filler, or as an anytime gift, for those who like their reading clever and compelling.

I can't wait for Von Klemperer's next one.

Margaret, I've known you for many years as the books editor of The Witness. You were kind enough to ask me to review books for your page many years ago and I thank you for many hours of pleasurable reading. It was with eagerness that I received a copy of your first novel, Just a Dead Man. I'm delighted to say that I enjoyed every page. What made you decide to switch hats from book reviewer to author? Have you always harboured the desire to write a book of your own?

Ever since I was at school. Mercifully, my first effort hasn’t survived – it would be very, very embarrassing. I realised pretty quickly that just having a tall, dark and handsome hero wasn’t going to be quite enough – he would have had to do something, and I had no idea what people “did”. But the ambition never quite died, despite all kinds of things getting in the way. When the time came I decided to retire and give it a proper go, and it has been a fascinating journey.

Was it more difficult for you to write your novel after all these years of being a book critic yourself? As a reviewer you have a fine-tuned sense of what works and what doesn't. Did this inhibit your writing in any way by making you more critical of your own creative process?

I don’t think it was inhibiting – it was probably more of a help than anything. For anything to work you have to be critical of the creative process. I was very suspicious if ever I felt something was just right the first time: that was when it needed a long, hard look, and my suspicions were usually well founded. I suppose I wrote the kind of book I would like to read for relaxation, but it was important not to think about other writers and books. It had to be my own work, my own voice.

Was it a relief to allow your creativity to flow in a purely fictional framework after your many years in journalism? Can you describe the difference between writing fact and writing fiction? Which do you prefer?

It was very hard, especially in the beginning. Journalists are supposed to be invisible in their own writing. You get the facts down, and let them speak for themselves, and keep yourself out of it. Of course, as a reviewer of theatre and film as well as of books, I could and did express opinions, but it was still difficult to make the switch. Also, in newspapers, where space constraints rule, short is good; long is asking to be hacked about. Fiction obviously gives much more scope, but you have to unlearn the rules that say “cut out anything that doesn’t take the story forward”. Description felt very self-indulgent to begin with.

It’s hard to say which sort of writing I prefer. They are too different. At the moment I’m loving writing fiction, but I still like to keep my hand in with other kinds of writing, reviews and interviews and so on.

I thoroughly enjoyed your whodunit set in our home town of Pietermaritzburg. It was good to recognise landmarks and familiar areas, such as the plantations where the dead body is found. Was it easier or more difficult to set your story in such a familiar place?

Easier – you can visualise settings in your mind’s eye as you write. Of course, you change things. If there’s a house or a tree in the way of what you want to do, you just demolish it or chop it down. Author as destroyer!

Your protagonist's life is disturbed when her Zimbabwean friend, Daniel Moyo, comes to visit her at home and finds a dead body in the forest just outside her garden gate. Suddenly she and Daniel are thrust into a murder investigation where their own innocence is questioned. I enjoyed the juxtaposition of the everyday life of an art teacher with the harsh realities of the criminal world. Mrs Marple was a great success for Agatha Christie, for the same reason, I believe. Is this is a winning formula, where the least likely person is the one who unravels a crime? If so, is this is because readers identify with a more ordinary protagonist, perhaps?

It’s not the way crime-writing is generally going, particularly in South Africa, where many thrillers are very dark, and very violent. But character rather than plot is what interests me most. I love the idea of ordinary people caught up in extraordinary situations, outside their usual terms of reference. I enjoyed thinking about how someone with no experience of serious crime or detection would react in the circumstances I put Laura into. And it gave scope for some humour, which I enjoy in crime-writing.

Your novel touches on the xenophobia which is unfortunately prevalent in our country: Daniel Moyo becomes an instant suspect when Sergeant Dhlomo takes a dislike to him as a foreigner. Did you want to explore this issue in particular in your novel or was this aspect of the plot merely an acknowledgement of the status of foreigners in South Africa in general, and Pietermaritzburg in particular?

I wanted the book to reflect the society we live in, and xenophobia is part of that, so yes, it was an important part of the plot. Just as I wanted to look at the way history is used and reinvented, and at how certain individuals can consider themselves to be above the law. But I tried to keep it light – the book is meant to be entertainment, not a treatise on the state of the nation.

You have a rich assortment of characters in your novel. The charming and urbane Inspector Adam Pillay is one, as is Laura's no-holds-barred NGO friend, Chantal, who works with abused women. There are many more characters peppered in between the pages from all walks of life and across the cultural boundaries. Do South Africans have a richer palette to draw from than, say, our British counterparts? Or are characters just characters, no matter where they come from?

South Africa certainly has a wide range of characters and opinions. But that would be true of anywhere in the world. And fictional characters are just that, after all – people writers invent from little scraps lurking in their minds: things remembered, things seen and things that are totally invented.

Even though Laura becomes endangered by serious criminals, I loved the fact that a good mug of tea could restore order of some sort to the insanity. I always find it soothing to know that even in fiction small actions can bring comfort. Do you think readers are equally reassured by the simple mundanities which balance your characters' lives?

I do think readers enjoy reading about lives that are not so different from their own – I know I do. And while characters may be detecting, or saving the world, or destroying it, they are still basically ordinary people underneath all that, and I hope readers relate to that side of them. A cup of tea, or coffee, is a pretty universal panacea, I would say.

How does it feel to be on the receiving end of reviewer's comments for the first time? Do you prefer being the reviewer, or the reviewee? And why, of course!

I’ve always tried to be a fair reviewer, and I would hope that if Just a Dead Man gets reviewed, the reviewers will be fair, and constructive. But it is a terrifying thought, tossing your offspring out into the cold, hard world!

I’m not sure that being a reviewer and being reviewed are really comparable in any way. After all, one is a job, the other is my life (or I hope it will be).

Here's the dreaded question every artist hates when they've just finished a huge piece of work: What's next for you? Have you fallen in love with novel-writing and do you hope to write many more novels? I do hope so. I look forward to your next novel with much eagerness.

For sure. I certainly want to carry on. I’ve got a couple of ideas I’m working on, and we’ll see what comes. But I don’t want to tempt fate by saying too much at this stage.