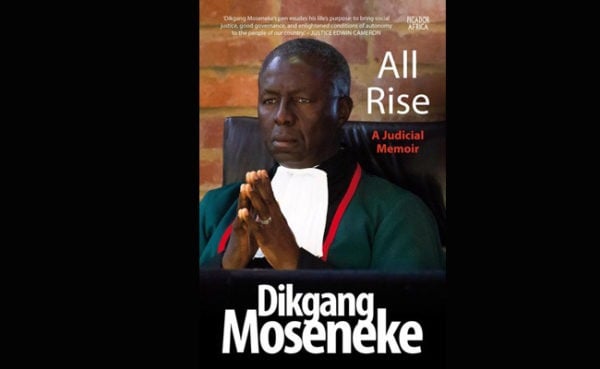 Very few books that I have read in my life have been so eloquently composed as this one. When justice Dikgang Moseneke’s personal memoir, My own liberator, was published in 2016, I never got around to reading that book. Having read this judicial memoir, I am now even more determined to read My own liberator sometime. It is a treat to be able to read such skilfully written prose. Judicial memoirs are not common to South Africa, and with this publication, Moseneke therefore makes a very valuable contribution, which will hopefully set a trend. It is fascinating to revisit the early years of South Africa’s constitutional democracy from the perspective of the judicial system, but knowledge of the courts is not always accessible to the layperson.

The book covers many important aspects of the post-apartheid judicial system, including the development of the Constitutional Court, many of the important cases over which the court presided, as well as its inner workings and even some of the conflicts that arose between the judges. With the dawn of democracy, a new judicial system had to be devised. The highest court in South Africa at the time was the Supreme Court, which was renamed the Supreme Court of Appeal, with a chief justice at its head. The Constitutional Court was initially developed with a focus on constitutional matters, as opposed to the Supreme Court of Appeal, having a focus on non-constitutional matters. It soon became evident that the functions of the two courts might overlap, as it was not clear which was the highest court. The matter was resolved by means of a constitutional amendment, extending the scope of the Constitutional Court – as the highest authority – to include “any other matters and any other dispute that deserves its attention or that it has granted leave or permission to hear” (65).

The judicial system plays a critical role in the well-being of society, as it aims to heal society and keep society together by means of fair judgements. Moseneke details how the Constitutional Court overturned the use of the death penalty, which was found to be unconstitutional. Another important aspect is the relationship between government and the courts. This relationship has always proved to be challenging, and continues to be so today. One classic example on which the book reflects is the tragic policy towards HIV/AIDS which the South African government maintained, and which was successfully challenged by the civil rights movement Treatment Action Campaign (TAC).

The work of a constitutional judge is intensive and requires a lot of reading and consultation. Good relationships, mutual respect and trust between fellow justices are of paramount importance. Of particular interest is a certain incident involving chief justice Mogoeng Mogoeng and justice Zak Yacoob. Moseneke relates how Yacoob confronted Mogoeng about his habit of concluding his emails with the words “God bless you”. Years later, Mogoeng Mogoeng also came under fire for suggesting that COVID-19 vaccines might be able to “corrupt” human DNA, which would be the work of “the devil”. The former incident places the latter into an interesting context, if I may so observe. While many people reacted with shock to Mogoeng’s controversial prayer, others have hailed him as a man of God. Such is the life of a prominent judge; many eyes are focused on their every move. In general, however, the relationships between the judges were very good during the term of Moseneke, despite incidents such as these.

The book concludes with a chapter detailing Moseneke’s work after retirement, in particular chairing the Life Esidimeni Commission of Inquiry, as well as his farewell address. South African judges retain their titles for life, and can be called for short stints of judicial service even while retired. Such was the case when Moseneke was approached to chair the Life Esidimeni Commission. Moseneke gives a detailed account of the work of the commission, which attempted to mediate in the tragic events in which many people lost their lives.