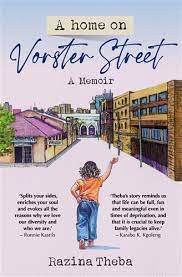 At the end of this poignant little autobiographical gem, Razina Theba muses that “everyone has a place that holds the past in it … for me that is the home on Vorster Street”.

The author’s family home on Vorster Street was a cramped flat in the Johannesburg suburb of Fordsburg, the location since the 1970s of the apartheid state’s Asian confection, the commercial “Oriental Plaza”, into which uprooted Indian traders were shoved to run a showy ethnic bazaar. That is, of course, not Fordsburg’s only claim upon a significant small spot in South Africa’s modern history. A century ago, its population of radical white mineworkers was at the epicentre of the violent 1922 Rand Revolt, the insurrectionary mass strike under the notoriously racist slogan, “Workers of the world unite for a white South Africa.”

In its way, Fordsburg’s chequered past is yet another thread in South Africa’s old coat of many colours. In Vorster Street, the suburb serves as a sort of metaphorical trampoline upon and across which Razina Theba bounces along for several decades, radiating her infectious energy and vitality. Even now, it still possesses a magnetic pull for the author, as she reveals that after four decades she still visits the Oriental Plaza “about once a month”.

In its way, Fordsburg’s chequered past is yet another thread in South Africa’s old coat of many colours. In Vorster Street, the suburb serves as a sort of metaphorical trampoline upon and across which Razina Theba bounces along for several decades, radiating her infectious energy and vitality. Even now, it still possesses a magnetic pull for the author, as she reveals that after four decades she still visits the Oriental Plaza “about once a month”.

There, she basks in the glow of being a known family face to some of the original tenants, using this, as an ex-insider, to bargain over the price of goods. This is a memoir unfolded in small voices, with the author’s own surrounded by a rich assortment of others, from a Dr Laher fussing over childhood tonsils to a Johannesburg traffic policeman who, in the recent past, was incredulous that someone named Theba was not Zulu. Razina Theba, an Indian-Muslim Johannesburg attorney, is of unspecified age, and the rather random attention to dates in this collection of 20 vignettes is a slightly frustrating feature of this book. A curious reader (like me) who would like a decent chronological spine to the author’s story has to try to piece it together from a few confirmed moments in time. This matters, as the author is perhaps too young to be the writer of one of those curiously ageless classic memoirs.

What we have is an unfinished journey through the later apartheid era into the present, which seems to start roughly during the 1970s. It takes until page 60 to discover that Razina Theba was only born in 1976. These days, autobiographies continue to be written at a precociously young age. Vorster Street makes up for its chronological fuzziness with an enchantingly informative glossary, packed with local slang and explanations of Gujarati, Arabic and Afrikaans words and phrases, and so fragrant with Indian food terms that you almost feel like sniffing the pages. In a book which is not short of fun, they provide a suitably airy South African note on which to end, with listings for jol, gatvol and poep-bang.

With life viewed through a warm domestic lens, a neighbourly world peopled by some bonfire personalities, and a good eye for the mundane essentials of everyday living – like Zam-Buk ointment, Christmas beetles and the Manhattan Dry Cleaners – this memoir has something in common with older local examples of the township life genre, such as Godfrey Moloi’s 1980s twin volumes of My life. In its spirited exuberance – if not in lyrical quality – Vorster Street bears some comparison with Chris van Wyk’s atmospheric 2010 memoir, Eggs to lay, chickens to hatch.

In fact, his poetry gets a mention in Razina Theba’s story. Although similarly empathetic in its well-observed portrait of a noisy – and nosy – urban existence, this memoir’s prose can be variable in places, hitting a few flat spots with humdrum whizz-bang detail. For instance, chapter 15, “Victims!”, with its Carte blanche episodes, iPads, criminal assaults and that other staple of South African households – the faithful and beloved domestic worker – includes Razina Theba’s account of an attempted armed car robbery in Johannesburg. While this must have been a terrifying encounter, in its telling do readers really need to wonder about the servicing cost of a Mitsubishi Pajero 4x4 and the price of its “tiptronic” gearbox? It is almost as if a passage might have slipped across from a Deon Meyer crime thriller. Turning to petty crime programmes, like the SABC’s Police file of the later 1970s and 1980s, the author offers a sardonic comment on the apartheid era in which she grew up, saying that “the designers and enforcers of the crime against humanity in this country were never featured”.

Granted, it is now almost an act of nature to nod amen to that sorry chapter of this country’s history, while at the same time joining in a sorrowful chorus that it has not exactly been succeeded by the harvest of good order and decency to which more wide-eyed optimists looked forward a few decades ago. Depressingly, South Africa’s bare-faced criminality continues to flourish freely in places high and low.

The author’s personal experiences of life under apartheid are, naturally enough, one of Vorster Street’s defining features.

The author’s personal experiences of life under apartheid are, naturally enough, one of Vorster Street’s defining features. In detailing how her tightly interwoven neighbourhood coped with a system built on keeping people in their proper place, Razina Theba is a remarkably composed observer, often nimble, largely matter-of-fact, and free of excessive high drama. Politically, her portrayal rings very true for the dormitory world of Fordsburg’s Asian community, jostling together under the communal cultural umbrella of Muslim Eid and Hindu Diwali, making the most of its commercial instincts, and trying to keep its nose out of trouble in handling apartheid’s varying inflictions. As the author recalls of Sunday family picnics “at the lowest level” of the landscaped lawns of Pretoria’s Union Buildings (“Sir Herbert Baker’s genius”), a basic rule was never “to make eye contact with the security guards” and to stay well away from “white families playing … and laughing loudly”. The Thebas “needed to be on our best behaviour”, as “the idea was to … blend in … and to be as unobtrusive as possible”.

Through quiet observation, Razina Theba nails what such strangled confinement meant to a baffled young child: “simply the way things were”, an abnormal “version of normalcy” created by her parents for a trouble-free existence on the right side of the law. Yet, the defining note of this memoir is neither its telling depiction of the hurtful pinpricks of the apartheid order, nor that of its security police hounding of anti- apartheid activists around the Wits university campus, or that of the author’s insecurities alongside the greater self-assurance of her white student peers in university law classes in the 1990s. In a striking reflection, she puts it down to years of “conditioning” having turned her into one of “the poster children of impostor syndrome”.

Ultimately, though, what really stamps Vorster Street is its deeply intimate account of growing up in Fordsburg’s high-spirited, freewheeling atmosphere. This memoir’s liberal use of reported speech and italicised sentences accentuates a consistently entertaining milieu. Discursive in style, it provides everything from a lip-smacking exploration of food, including “the Eid salad” and biryani (“the flavour of royalty”), to the weirdness of curio stalls, the knockabout experience of schooling, domestic performances by pushy relatives, and an encyclopaedic range of aromas (including “the rancid smell of burnt milk”) along with morbid superstitions. As “deceased bodies were fragranced with camphor before Muslim burials”, a warning from Razina Theba’s “aunties” was that any “passing smell of camphor or eucalyptus predicts a death in the family of the person who smelt it”.

Granted, A home on Vorster Street is not a memoir to be praised for the exceptional quality of its prose or the mature vantage point of a long life.

But it is to be commended for the scrupulous directness with which it recounts the idiosyncrasies of multigenerational living, and for what it reveals about the making of one contemporary South African memory and about how we create the stories we tell about ourselves.