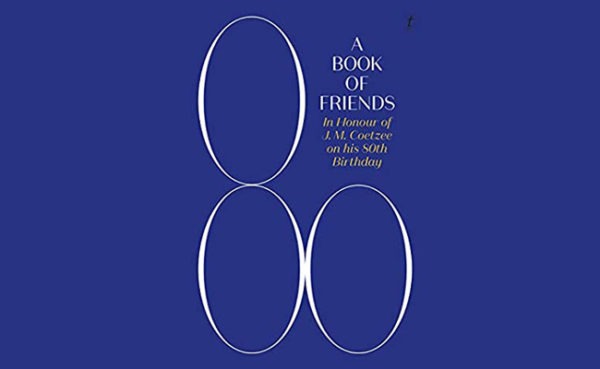 A book of friends: In honour of JM Coetzee on his 80th birthday
Edited by Dorothy Driver
Amazwi South African Museum of Literature, 2020

One looks back, wanting to tell everything without hesitation and there is nothing left, everything has been told a thousand times.

It is our fate:

To start again with the simplicity of the first letter.

South Africa’s most renowned author, JM Coetzee, turned 80 earlier this year. He celebrated this special birthday in the circle of his family, friends and admirers at the Amazwi South African Museum of Literature in Makhanda/Grahamstown. The occasion was also marked by the publication of this remarkable book: A book of friends: In honour of JM Coetzee on his 80th birthday. Copublished by the Amazwi South African Museum of Literature and Australian company Text Publishing, the collection of essays, stories, poetry and reproductions of visual artworks is a striking tribute to a great writer, his life and his work. Any royalties the book generates will be donated to non-profit organisations.

Academic, editor and Coetzee’s partner, Dorothy Driver, compiled the anthology, referring to it in her preface as "a gift of love, from myself, its editor and his life-companion over four decades, and from a few of those whose creative work and conversations John has admired and enjoyed in the regions where he has lived or worked". It also reads like a gift of paying attention, as the diverse contributions speak to varied aspects of Coetzee’s writing and life in gripping ways. The sequence which Driver chose for the pieces allows for a gentle unfolding of a tapestry of ideas and memories that complement and enrich one another.

In the foreword, Jonathan Lear writes about his first encounter with Coetzee’s work, Waiting for the barbarians: "I felt I was in the presence of truth." The novel was also the first one I read from Coetzee’s Nobel-winning oeuvre and remains a favourite precisely because of the impact it had on me as a reader and a human being. Lear also offers two impressions of meeting Coetzee. Debunking the public perception of Coetzee as reclusive, he writes that "John is not reclusive but he is impatient with living in clichés", and describes how, even though now his friend John always leaves, he "also comes back". In a seamless transition between the texts, this heart-warming observation is immediately followed by Akwe Amosu’s intimate poem, "Returning". Amosu is the widow of Coetzee’s brother, David: "To see your brother step through/ the ancient door, his smile in yours,/ it stopped my breath … he was so clear in you/ if not himself."

The art section of the book includes a portrait of Amosu, painted by her late husband. It also features, among others, a 2011 portrait of Coetzee by Adam Chang, William Kentridge’s It is not good news, but it is our news (for JMC) (2019) and parts of Roger Palmer’s 2019 exhibition Refugio – after Selkirk after Crusoe.

In 2014, JM Coetzee and Paul Auster published Here and now: Letters 2008–2011. Auster’s contribution to A book of friends is an excerpt from Burning boy: Notes on Stephen Crane, in which Auster writes about Crane’s short story "A dark-brown dog", which no reader can unremember once read. A dog features, and the animal’s treatment, of course, brings to mind the dogs in Coetzee’s Disgrace. So do Eva Hornung’s powerful fragment from The sound of water and, more distantly, but nevertheless, Michael Morley’s wonderful "Walter Benjamin’s real-life tales of dogs: A translation", which opens with the line: "Doubtless you think you know all about dogs."

Taking another Coetzee classic as reference, Shannon Burns creates an entire text from the questions he finds in Scenes from provincial life (1997). Robert Pippin discusses the intriguing relevance of dance in Coetzee’s The childhood of Jesus (2013) and The schooldays of Jesus (2016). In "Literary non-sites", Carrol Clarkson writes about place in Coetzee’s work and quotes a few paragraphs from Youth, including this line: "He does not yet know England well enough to do England in prose." The essay is followed by two poems by Ingrid de Kok – the first, "Cape south-easter", immediately evoking a sense of place. Anyone who has ever had the dubious pleasure of experiencing the wind of the title in the Cape will feel it in their bones while reading. A sense of place is also central to Antjie Krog’s poem "In die veld naby Leeu-Gamka", which ends with these exquisite lines:

The book includes three other poems by David Malouf; the last speaks straight to one’s heart:

in his mouth, my pen in
his hand, the contract
between us finally sealed with no
escape clause, and on my part
no option but with good
grace to stand
aside and bid him
"Welcome!"

Language and place are also addressed in Mariana Dimópulos’s "Puente/Brücke/Bridge". Translated from Spanish, the contribution explores how language and belonging go hand in hand and how often violence follows as a result of the lack of understanding between people. It is a piece about concepts and the words we use to express them in the hope of communicating with others, in the hope of sharing.

A few of the other contributions have also been translated from Spanish: Pedro Mairal’s moving "Road trip", Samanta Schweblin’s short story "My parents and my children" (with its great ending!), Anna Kazumi Stahl’s beautiful "A Japanese tango dream" and Carlos Rafael Ruta’s "An interlude of stillness" (the phrase itself has its origins in Coetzee’s In the heart of the country), which has been inspired by Coetzee’s repeated visits to Argentina: "When we returned, we were no longer the same …. This text is about that time. The poetry of having experienced it."

Brian Castro, Gail Jones and Zoë Wicomb offer excerpts from The slow derangement, Our shadows and Still life (recently published in South Africa) respectively – and invite the reader to a further exploration of their own fascinating works in relation to Coetzee’s.

I have always had a soft spot for Coetzee’s character Elizabeth Costello, and so I had a good laugh reading Peter Goldsworthy’s witty "What’s it like to be an old bat?" Not to be missed! Jennifer Rutherford’s deeply touching and insightful "Hunters and collectors" also refers to Costello and is about, among other explorations, the coconut rhinoceros beetle, "one of the only beetles that makes a sound loud enough for a human to hear, like a cicada".

One of my all-time favourite authors, Ivan Vladislavić, contributes a stunning short story, "The elephant in the room". Another, Siri Hustvedt, writes about memory and the women in her family. "Personal memories can be contagious," she says. "They are reimagined or remembered according to one’s needs, and sometimes they are pure fiction." In another autobiographical piece, Carrie Tiffany recalls her family’s move from the UK to Australia and how her father’s (in)actions during two natural disasters shaped her memories of these times: "Years go by unremembered, unrecounted, but then minutes will compress and haunt you for the rest of your life." Migration and the suffering often involved are recognised in a fragment from Marlene van Niekerk’s Johnny’s Anthropocene blues. In one of the most emotive contributions to A book of friends, "Recovery" (translated from Spanish), Luisa Valenzuela writes herself out of a time of forgetting: "Because until a week ago I did not want to know anything about anything, and now I want to know. This is what being in life is all about. And the return to writing."

I also loved this exchange between the characters of Nicholas Jose’s "Evvy after":

"I’m so sorry," Michelle crooned. "Is there anything I can do for you?"

He peered at her, incapable of words, when the answer was: everything.

In a personal essay, "In conversation", Oliver Mayo comments: "John has a way of asking a question. Engaging one intently, he asks, ‘What do you know about (as it might be) probability?’" Rajend Mesthrie recalls the time Coetzee was his teacher in linguistics at the University of Cape Town, where Mesthrie studied kinship semantics in Zulu and Tamil.

What will stay with me for a long time after reading this multilayered collection is the deep sense of curiosity which runs through A book of friends – it is an expression of care which the authors and artists share with the man they pay tribute to. In the words of CJ Driver: "Contentment not the aim, but all the same/ to love and know for sure that one is loved" ("A sort of prayer").