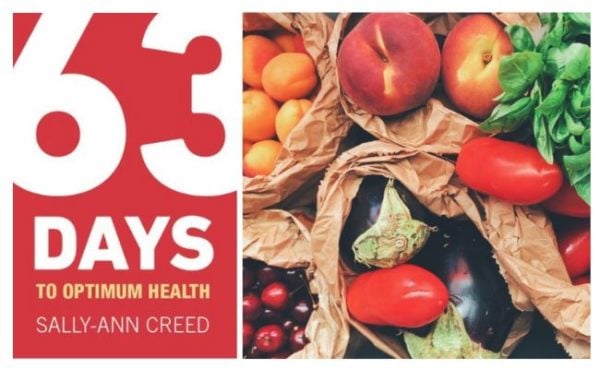 This is a book to buy and to keep if you are interested in a holistic, healthy and ethical lifestyle. Sally-Ann Creed will help you with buying your groceries, with cooking and preparing your food, the use of cosmetics and cleaning products, screen time, exercise and even fertility. It is an attempt to obtain “optimal health”.

Creed’s own life changed when a medical doctor, Robbie Simons, guided her towards a holistic health approach; that in turn led her to study nutrition and she has “never looked back”.

If the name Sally-Ann Creed sounds familiar, well, you would have seen it on the red Banting Bible called The real meal revolution. Creed was one of four collaborators on that massive text.

Now she’s written her own.

Is hers different? Yes, it is.

Is it better? It depends, I guess, but is definitely a must for those who are not comfortable with a Banting or keto lifestyle.

Not a keto guide

Some people do well on a diet with very low quantities of carbohydrates.

Armand Aucamp recently sold out two print runs of his (Afrikaans) keto book called Armand kook kaal. Aucamp does well on a ketogenic diet – hence the fact that lots of people want to see him in the nude. His book also received excellent praise from Tim Noakes.

But what if you are not Armand Aucamp?

Creed says that while ketogenic diets “are excellent and have their place, I don’t believe they are sustainable in the long run, so you will find no reference to ketosis here, nor excess amounts of fat”.

She says this book “leans towards a lower-carbohydrate, Paleo way of eating rather than a low-carbohydrate lifestyle”.

63 days to training the brain

The title and the first few chapters of the book refer to the way we can train our brains to rewire. Creed correctly points out that we can create new neuron pathways in our brains and that we can hardwire our thinking away from sugar and refined starches. She says it takes 21 days for our brains to create a pathway successfully and then 42 more to solidify that pathway.

Her book uses various techniques to help us train our brains to think in new ways.

This is not a threatening book that says “Thou shalt not.” It is much more: “Where are you now? May I invite you along?”

Brain research suggests that many people do not do well when confronted with drastic change. Anyone who has had a problematic upbringing, or whose parents were dogmatic in their approach to childrearing with a lot of fear built into “othering” has the tendency to simply get aggressive when confronted with a choice that lies beyond their immediate comprehension. Seeing where South Africa comes from, it is easy to understand why change management takes time here.

Creed invites us to be kind to ourselves.

To those who scoff at pop psychology, I would like to point out that many overweight people already have insulin issues and any medical doctor would tell you how insulin messes with our front-lobe functioning. I know too many people with severe insulin problems who are unable to understand the facts about their own health. They see red, and stomp off to eat a chocolate bar. True.

Creed’s much more gentle approach should therefore be welcomed.

I liked Noakes’s blunt approach. I specifically liked the explanation about my insulin levels and could easily make the switch to keto. So could Armand Aucamp.

Yet, I have shared those same facts with many colleagues who are, however, still eating cup cakes with their coffee in which spoonsful of sugar lurk. The blunt approach simply did not work on them. They would rather inject insulin and take expensive medicines.

Enter Sally-Ann Creed. I would hope that her book will help those who cannot deal with sudden changes, who therefore could not make the switch to Banting, despite being presented with hard facts.

Many authors jumped on the low(er)-carb Bantwagon a few years ago and some publishers responded with bizarre recipe books written by those with no understanding of a healthy lifestyle.

Others responded with some quite excellent books. I asked my wife, a medical doctor, to suggest the really good recipe books on our shelf. Here is her list, which I’ve placed in alphabetical order of authors.

My wife has not read Creed’s book yet, but I would certainly place 63 days to optimum health on the list of books that we will frequently consult.

Creed’s book contains yummie recipes, many of which I would be able to knock together. Whisk up her mayonnaise. It is easy, healthy and delicious. And anyone who has had a look at her recipe for vanilla essence will never want to buy the commercial product ever again.

There is much more. Creed takes one on a journey to wholeness. Make your own toothpaste, make your own sunblock, or wear protective clothing. Make your own almond milk. These, and many similar examples, make the book worth buying.

On our shelves is a little booklet, The green home guide, written by Carole Breeze and Jill Ritchie. It was published by Chameleon Press in 1992. We frequently consult it to find healthy, green ways to repel ants, wash dogs, get rid of stains, and such like. Now we have a companion guide to consult.

Here is how Creed deals with a well-known occurrence: “Wine spills: It happens. Uncle Joe leans over to grab a handful of nuts and knocks his red wine all over your carpet. Don’t panic …” (Buy the book for the solution.)

You will find healthy alternatives for cleaning the toilet, removing odours from the fridge, and many more. The list is long. Creed wants you to find green, sustainable alternatives to quick fixes from a plastic bottle. That goes for the food you eat, the stuff you put on your skin and the things you surround yourself and your family with in your living environment.

In a country where a day-old road kill may constitute a feast in some communities, it sounds odd to be preaching ethical farming instead of factory-raised animals and GMO food.

Yet the more people become aware of alternatives and the more those with choices are willing to reward ethical farming practices, the more likely we are to find cheaper, fresher food becoming available to a larger part of the community.

I have a healthy scepticism of some types of “organic” farming, and am happy to point out that the “horror products” of large-scale commercial farming have had to be tested and retested, unlike their “organic” counterparts, but at the same time, I do agree with the principle behind ethical farming. Creed and I may differ on some aspects, but she is correct overall: Know the farmers and their methods; buy from those who care for the environment and for the animals they raise.

There are good-food clubs in many cities; we belong to one. Close to my mother’s house is a weekly fresh-produce market where one can buy from the farm, where the farmer becomes a friend. These are some of the alternatives Creed suggests we use.

I certainly agree with Creed on this. Anyone who has read the works of Yuval Noah Harari will know how dire our inability to connect with our inner being has become. Harari suggests alternatives to the horrors of mass production; so does Creed.

I often find myself among the poorest, and there I eat whatever I get. A sandwich made from a government loaf with margarine and cheap jam is a sacrifice presented to a rich outsider; I eat those in the spirit and with the grace with which they are offered.

Yet, since I am rich, I have choices.

Rich? Madam/Sir, the mere fact that you have had the leisure to read this review most likely shows that you have means far beyond those of the average person in South Africa. In our country you are rich if you can even consider choosing which brands you would like to buy. Deal with it. And be ethical with it. Read Creed. You may disagree with some of her points (I do), but then be aware of how privileged you are to be in a position to have the choice to disagree.

Amylase and critters in our guts

Creed provides a very good overview of the amazingly unique microbial species we have in our guts. What was less clear in her book was how each person’s gut, even the amount of amylase in our spit, will make us more or less able to process carbs. That may have been helpful, for while my wife and I both follow a low-carb lifestyle, I have a lower carb tolerance than she does. It means that her diet is a lot more like the one Creed suggests, while I am a lot more comfortable with a very high intake of fat.

Creed also does not explain how some people’s bodies over-insulate when they eat carbs, while others’ do not. When secreting too much insulin, my body will protect itself by secreting the hunger hormone. Should I still my hunger with more carbs, that vicious circle will be perpetual, which will make me pick up weight.

By cutting carbs and eating lots of fat I do not get hungry.

People with enough amylase in their spit do not have the problem of secreting too much insulin; they therefore do not know of the perpetual hunger that carbs create.

Creed is clearly more intolerant of dairy products than others, and she therefore warns a lot more against cheese than others do.

While I think Creed’s book is rather good, I do find that she writes more from her own gut (pun obviously intended) than she does for my gut.

In the end I found this to be the only shortcoming: She could have said that some people can cope well with a lot of carbs, others with less, and some with very little. Overall, though, I think her message is fabulous and I do recommend her book, but for those who prefer to be in ketosis, and for those who has never experienced carb intolerance, she may miss the mark. But then, neither party may necessarily need her book.

What comes after Banting?

I often get asked: “Are you still Banting?” Yes, I am.

After I switched to a high-fat diet and actively began limiting my carb intake, I know the benefits.

Yet, while I certainly back Noakes on this, I do understand Creed when she says hers is an alternative. I have lost my weight, have a healthy body and train regularly. That does allow me the freedom to have the odd beer, eat potatoes now and then or, oh heavens, enjoy freshly-baked home-made bread. These are “cheats” or “rewards” and they certainly do not happen often, but they do.

Creed’s alternative lifestyle will work very well for my wife, who is less carb-intolerant than I am. More importantly, it will work for those who have lost their weight due to a strict period of ketogenic eating, but who feel that they cannot maintain such a lifestyle. To them I’d say, buy Creed’s book.

I would definitely suggest that those who are too scared of going low-carb would do well with Creed’s book.

While Noakes is less keen on supplements, Creed provides a detailed analysis of which supplements are good, and when they might be needed.

Creed may well be providing the middle ground that Noakes could not provide. Noakes was (and still is) rather black and white in his approach. It irritated me somewhat back then, but I have learned why it works for me. Yet, I have also learned that it may not work for others.