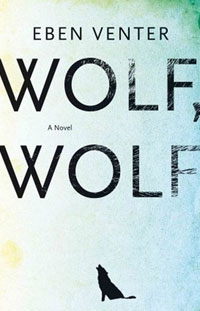 Published simultaneously in both Afrikaans and English in 2013, Eben Venter’s novel Wolf, Wolf was arguably more favourably received in its English translation by critics, particularly in reviews by the likes of Leon de Kock and Ken Barris. It is a heady, haunting and by times jarring work in its original Afrikaans, and while looking at the incredibly wide application of the “wolf” motif in the text I want to argue here that the translation by Michiel Heyns maintains much of the novel’s superb sense of mood and atmosphere. A beautifully sleek animal, muscular in its (translated) prose and slightly more clipped and tidy in its translated form, the novel bares its teeth most ferociously but also most movingly in the way that it rips open the central problematic of dying and decay, and its correctives in living and growth/love.

The following Latin saying holds particular sway as organising axiom: “Homo homini lupus est”, meaning “man is a wolf to (his fellow) man”, sometimes translated as “man is man’s wolf”, interpreted as a way of saying that men prey on one another.

Rather than offering a plot summary, it will suffice to say that the text weaves various threads from the relationships and forms of relation, both filiative and affiliative, supportive and parasitic, between the staunchly conservative, ailing patriarch Benjamin, his gay son Matthew, addicted to pornography, deeply troubled and very much living a “wired” existence where he manically surfs the net for porn in between care-giving duties, and his lover, Jack, an alienated school teacher with a painful past who spends much of his time online. A fourth man, Emile, a mysterious, even insidious foreign national, becomes prominent during the dizzying third act, when Matt opens a restaurant with his inheritance, and where the novel is most enigmatic, hallucinatory even, and tragic.

The title Wolf, Wolf takes its powerful metaphoric charge from the traditional children’s game where one child acts as the wolf and other children ask for the time until the wolf decides to cry out that it is time to feast, then attempts to “catch” his next meal. While the game is generally innocent, it takes on a deeply sinister form when played by Matt and Jack. What they do is to “cut their wolf loose” – to do something to get into trouble. And do they ever!

Because both Matt and Jack have doubts about their relationship, struggling for intimacy while becoming mutually dependent, the lines between them as “wolf” and “sheep” are blurred. Jack can be seen to have been thrown to the wolves in his difficult relationship with Matt, who constantly and voraciously “wolfs down” pornography, while the same could be said for Matt in his role as caregiver, untrained in dealing with dissolution and death, for his wolf-like, sick, alpha-male father.

I would argue that the biggest wolf in sheep’s clothing is the sly con artist Emile, whose name, by no accident, means “rival”. He is clearly Matt’s antagonist, and Matt, a lone wolf, is forced not to cry wolf but to seek help after Emile steals what to his mind is the fat of the land. Accordingly, whiteness, white privilege and perceived vulnerability to inchoate threats are dealt with in a way quite unlike the way any other recent novel I can think of deals with these themes.

To buy someone’s wolf ticket – to challenge someone’s taunt or to taunt – is enacted by Emile, one whose bare survival on hand-outs from Matt would constitute keeping the wolf from the door, so to speak. In the King James Bible, Matthew 7:15 speaks of a person who hides malicious intent behind a benign manner. In the novel this would certainly be Emile.

It is instructive that the novel’s two main characters, Benjamin and Matt, have Biblical and highly connotative names. Whereas the name Benjamin means “son of my pain”, and the character Benjamin is a pained man both literally and figuratively, Matthew means “Gift of God”, and in the novel’s context Matthew plays the role of the sacrificial lamb, or the lamb to the slaughter. Here, the novel expertly reveals how there are more ways than one to lose a life.

The idiom that “a growing youth has a wolf in his belly” is embroidered upon as Venter asks how much and what kind of love we want and need, and what kinds of love can ultimately be sustained. Going into too much detail would do prospective readers an injustice, but is safe to say that few relationships (here), if any, are straightforward, purely beneficial, or without cost and sacrifice.

The reader is told at a certain point in Wolf, Wolf that “every word has been sifted and weighed”. This sifting and weighing plays out in a myriad ways in which characters must veil or obscure their true feelings or thoughts, change their behaviour, carefully weigh up various options, and find ways to express particularly troublesome emotions and desires. Apposite examples would be the compound words and phrases Jack uses and his cyber-messaging on Facebook, truncated, cut short, abbreviated, emasculated even. He is a man literally and figuratively raped, stripped of agency, yet later described as a “jackal through and through”. His name, as functional abbreviation of “Jackal”, is thus also reflective of his character.

According to Matt, Jack must simply “get over that little violation”, indicative of the former’s cruelty or callousness. Jack is also unable to maintain a productive relationship with his absent father, in this sense acting as Matt’s double. Interestingly and tangentially, Jack’s schoolboy learners are taken to Misverstand (“Misunderstanding”) Dam on a fateful rowing trip, where tragic “miscommunication” does indeed take place.

Matt is “held captive by eyes behind their closed lids”, by a man “never known for his tact”, in a world “where requests become commands and orders, reason madness”, a world of “clutch and release”. Benjamin is a man “who in his prime had everyone at his beck and call” at his Mercedes-Benz dealership while, in the careful negotiation between father and son, Matt is not admitted to the inner circle of masculinity as a boy. He is regarded as “a different kind of creature”, no less, and Venter notes the impossibility of Matt’s even synchronising his breathing with his father, “the belated convulsion[s] of a dutiful son”. It is as if every thought and decision is related back to an external agent. Such vivid details make it imperative for readers to perform the closest of readings; the text simply demands it.

Matt’s meticulous, womanising father, haunted by visions of his past, has “more or less” to “steal” time from his son in the process of physical and emotional dissolution. A key motif here is the picture of the Battle of Blood River in his study, something Matt hates. While the dying Benjamin becomes “grey”, wolf-like, hairy, reduced to an animalistic state, his son seems to himself like a “predator”, spreading a disease of addiction as he ensnares Jack. Matt sees himself as a wolf, “one that will tear the food from the beaks of its own children”, only occasionally shocked, as the novel progresses, out of his “bourgeois complacency” in the “new South Africa”, rules by “crooked logic”.

In one of the novel’s most carefully rendered sequences, the final visit for Benjamin to the family farm Luiperdskop not only makes the revelation possible that Matt’s uncle Hannes is gay, it shows that jackals kill lambs on the farm and allows for Matt to emerge as the “wastrel of the family” to some. After Benjamin’s passing it is interesting to note that the man tasked with the reading of the will, Uncle Frans, is described as being “in every respect a grey man”. The Duikers are thus a veritable pack of wolves in Wolf, Wolf. This being said, readers will likely find much to ponder when confronted with the ironic “otherworldliness” in Afrikanerdom as perceived “security” as represented by Benjamin and the noxious character of Tant Sannie, a conniving gold-digger.

The novel’s final third, a radical departure in its “thriller” feel to earlier sections, sees the “threatening” Emile (who has a “monster dog”) “worm[ing] himself” into Matt’s shop, eyes full of resentment, hatred even, when seen as a “sub-human”. This happens while Matt “acts on his senses”, with the restaurant “as if he’s entered another sphere, one of survival, where he’s acting beyond the limits of his body’s abilities”. In the meantime, Jack, who later on in the text wears an actual wolf mask (Jack believes a mask is a talisman, calls it “Wolfie”), “forces himself” upon the Duiker’s Cape Dutch house, lives in a “fatherless vacuum”, and cries about “lovelessness” at his home in Worcester. To prevent many spoilers I will not reveal any further details; suffice to say that the novel’s climax is utterly convoluted and deeply harrowing.

Accessible yet demanding, challenging yet highly rewarding, Michiel Heyns’s translation of Venter’s Wolf, Wolf is a unique addition to the author’s diverse body of work. Poised somewhere between the aching My Beautiful Death and bleakly exhilarating, doom-laden Trencherman, the novel is perhaps Venter’s most audacious work yet, subverting expectations as it shifts the ground beneath our feet.