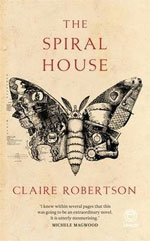 Claire Robertson’s extensively researched debut novel, The Spiral House, comes after thirty years spent working as a journalist. The novel has garnered praise from various quarters, unsurprisingly, since it seems to engage every nerve and fibre of one’s body and mind, so absorbing is its arc. It twists and bends two stories set almost 200 years apart into a thickly knotted rope of engaging narrative that gives imaginative shape to a punishing and fascinating history, one where facts are often stranger than fiction.

The first of the two tales, both centring on a relationship between a man and woman, is set in the old Cape in 1794. Trijn van der Caab is sixteen, inquisitive, able to read and sew, adoring of a “peruker” – a wigmaker and surgeon, Le Voir. The daughter of freed slaves, Trijn is to assist Le Voir in the country at Vogelzang (Birdsong) as he makes a wig for a girl whose head is without hair.

Furthermore, on this farm in the heart of country, as women keep their desires close to their chests and male slaves are beaten at work, a variety of strange activities are taking place: a son is quite literally hunting himself to death; a mysterious building houses mothballed secrets; pseudo-scientific experiments regarding racial classification and human breeding (straight out of the Carolus Linnaeus guidebook) are being conducted, while a baby on the farm has seemingly disappeared. All the while Trijn becomes increasingly drawn to her French employer, enticed to explore her own subjectivity and sensitivities towards the world around her and its people. Few on the farm could be prepared for the devastation that is to follow once the best-laid plans go awry.

The second story is set in 1961, the year South Africa became a republic – its Republiekwording year. Here we meet Sister Vergilius, a nun at the Mannamead Mission, who decides in the midst of a crisis of faith to turn her back on an icily stoic, unforgiving order. She comes into contact with gentleman farmer Francis Shone at Slagterskop, who, like Trijn’s Le Voir, is something of an enigma and very much an object of intense fascination for her. As those at Vogelzang are to be confronted with secrets and forms of violence few could be prepared for, the apartheid state and its security police are to be the bane of Shone’s existence, by virtue of his Englishness and suspected Communistic leanings. Newly promulgated laws of racial segregation will break families apart, splitting men, women and children in different directions, causing irrevocable damage.

While one could draw a host of comparisons to recently published texts dealing with farm life, slavery and emancipation and/or the relationship between master and slave, from JM Coetzee’s In the Heart of the Country to Marlene Van Niekerk’s Agaat, Yvette Christiaanse’s Unconfessed and Andre P Brink’s Philida, Robertson’s The Spiral House deserves to be read as a work able to stand on its own as a distinguished and superbly executed historical novel.

Robertson is equally adept at excavating the frustrations and suspended desires of slave women and nuns and at tracing the gestures of kindness and bonds of affiliation that would help to sustain them in such particularly trying times.

The novel deserves special mention for the ways in which restraint and understatement are employed to heighten the sense of tension, both sexual and emotional, between the two female and two male lead characters in the novel. One can almost feel the electrical charge on the pages, despite the deliberate efforts to steer clear of overly descriptive language.
Apart from the fact that it sits comfortably among the aforementioned corpus, The Spiral House also resonates powerfully with current preoccupations that have arguably come to the fore in heightened form since the new millennium. These preoccupations include, but are certainly not limited to: the desire to draw and redraw borders in the face of increased global trafficking of bodies, ideas and commodities; the need to identify, classify and study the other or the stranger; the plight of women and children, refugees and migrants, or those seeking asylum; the need to archive, discover and rediscover history, memories and identities, particularly those from subaltern subjects; and the need to re-evaluate the concept of slavery as millions of persons are trafficked illegally around the world.

The novel is centrally concerned with the corrosive effects of violence, both as physical acts and as ideological instruments of pain and humiliation. It ties this central concern to an organising conflict, the tension between the Enlightenment ideals of reason, rationality and progress and the gross miscarriage of justice and violations that were carried out in the name of modernity and the march of history. There is more than a hint of Coetzee and a touch of Antjie Krog to be found as Robertson delves beneath layers of historical “truth”, her narrative archaeologically unlocking a multitude of parallels between the bitter history of slavery at the Cape and the thoroughgoing racism that flourished in parts of the country such as the old Transvaal during the 1960s.

Two powerful symbols, that of the moth, and that of the infant child, come to stand in for the harsh price that men and women, but particularly women, must pay in order to grow and develop into fully actualised subjects, feeling, thinking, fully liberated agents of their own destiny, able to spread their wings and establish both embedded and embodied relations to others, without fear of punishment or banishment.

As different kinds of love and desire manifest across the twinned narratives, The Spiral House offers a sumptuous smorgasbord of lyrical, sparse, powerful writing. Some passages are workmanlike, stripped of pretence; others are overwhelming, tender. Often it is the case here that a passage subtly creeps up on you like a figure in the dark. Visceral and slowly accumulative, filled with wisdom, compassion, sensitivity, the novel avoids sentimentality and triumphalism while offering glimmers of hope.

Extensively researched and gorgeously bookended by the artistry of the incomparable Joey Hifi, The Spiral House is a dense, demanding novel that requires from its reader an emotional investment and a willingness to listen. The voices that ultimately emerge are haunting, and sublime.