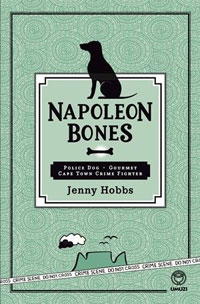 Jenny Hobbs has a knack for telling stories that are both stylistically impressive and eminently enjoyable. Her latest work, Napoleon Bones, a biting and clever crime thriller, manages to entertain as well as subvert expectations.

For starters, our narrator and crime-fighter-in-chief is no ordinary man. He’s no man at all, but a protective, faithful, affectionate police dog, part of the Western Cape K9 Unit, one half of Team A-R. Napoleon Bones, his name starting off as a “bad pun in the whelping box” – Napoleon Bones-Apart, since he would growl at anyone who approached when he was gnawing – is the trusty partner in crime to ginger-haired everyman Inspector Rusty Gordon. While Bones has great game with the ladies and instincts sharper than a Toledo dagger, he cannot say the same for the tongue-tied attempts at flirtation of his master, whom he desperately wants to see happy with a partner. Gordon, however, is every bit the kind of SAPS member you want to have your back: resourceful, fit and tough, and the pair make a mean team on the beat.

The chief thorn in their sides is a mysterious group known as the Blackjacks, thieves armed with knives and wearing balaclavas, so titled due to the tiny seeds found as evidence at the crime scenes they are involved in. Brazen and efficient, these criminals make off with so much loot from various small stores that the police are at their wits’ end. Gordon and Bones must crack the case, with help mainly from Gordon’s close friend and colleague, Spike Davids.

Apart from consistent references to the ways and plays of the crime novel itself, with the constable, Elise, being an avid crime fiction reader, and referring to local crime fighters Bennie Griessel and Eberard Februarie, among others, this self-reflexive novel is comparable to more humorous crime fare such as Sarah Lotz’s Exhibit A and Tooth and Nailed, due to its lighter tone and willingness to temper the hard-boiled with humour and comedy. Much of this nimbleness comes from passages presenting contrasting levels of success when it comes to romance for the canine and his commander, and from delightful descriptions of utter enthralment when Bones enjoys various gastronomical delicacies, of which some of the most divine are prepared by Gordon’s mother when the pair visit in Franschhoek.

While Rusty Gordon is the novel’s centre of gravity, an all-too-real and realistically portrayed protagonist, Hobbs has a ball with Bones, imbuing his character with wit, charm, and some decidedly tongue-in-cheek animal magnetism. As he relates his prowess as both gourmet and gritty law enforcer, it is impossible not to sit back and bask in the sheer exuberance and enthusiasm of the writing. In reference to Bones and his olfactory capabilities, some parts of the novel come across as a localised play on Patrick Suskind’s Perfume, set in France, without the sinister thematic arc.

For all its dexterity in avoiding possible clichés such as alcoholic detectives, cartoonish villains, risible representations of violence against women and excessive foul language, Napoleon Bones is commendable for its willingness to balance its light with just enough shade. Darker, more dramatic elements, such as corruption, xenophobia, stereotyping, the abuse of women and animals and patriarchy, blend seamlessly into the narrative, giving the text weight it would not have had as all-out farce.

Hobbs genuinely seems to like her main characters, which goes a long way to making them accessible.The female characters Zinnia, Rosa and Constable Elise are the three most interesting female figures, all grabbing the reader’s attention for different reasons. Conversely, apart from Gordon and Bones, the sleazy officer Smiter is a particularly nasty piece of work, growing in prominence as the novel progresses. Arguably the most heart-warming of the novel’s colourful cast of characters is Chef Bertrand (hint: it’s not his real name), part owner of Chez Pamplemousse and a kind-hearted spirit that takes a liking to Gordon and Bones.

I am willing to venture that readers with a taste for offbeat, hearty local fare will find much to savour here, and will want to read more from a prolific author with unmistakeable verve and vision.