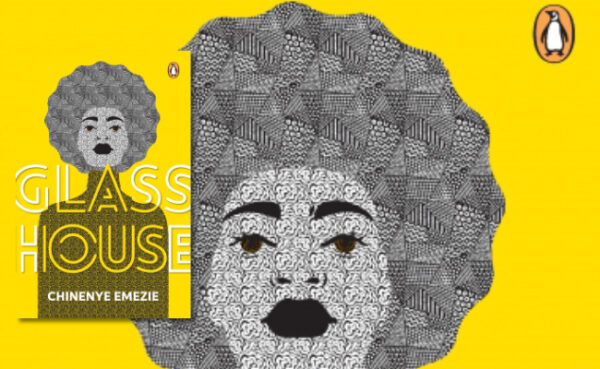 Emezie handles the abuse in her book with the seriousness that it warrants. It isn’t for shock value; it is just the terrible reality.

Leonard Ilechukwu is a man of many faces: a respected reverend who beats his wife and children behind closed doors. All of them suffer his abuse, except Udonwa, “the peaceful child”. She is golden in his eyes, and Udonwa loves him despite all that she witnesses. She is barely a teenager when her eldest sister takes her from Leonard’s home in Iruama to live in Awka, and Udonwa is suddenly faced with violence at the hands of her sister’s new husband. Glass house is Udonwa’s account of the war within her family – from a child, to a young student in Lagos, and then a woman sent spiralling. Udonwa discovers a secret that makes her question everything about herself and the family she thought she knew.

The story is set in Nigeria, and Chinenye Emezie has seasoned the story with enough information about the places and people to create colour and texture without exoticism. Perhaps that is the touch that comes from an author who was born where their story is set. I enjoyed the small details about Nigerian cultures, from rural living to big city life. Even though it is set in a country that I have never visited, at its best moments the story feels like it could be happening not too far away to people that I could meet anywhere.

The most obvious theme in Glass house is domestic violence. In the first chapter, Udonwa narrates an incident in which her father’s rage might have proved lethal against her siblings. It is hard to fathom the love that an innocent child can have for an abusive parent. My eyes skimmed over the words that stated her love for him, and the rest of me did not accept it, but this is a story told through Udonwa’s eyes, and so we read on to find out how this will affect her life and the lives of those around her. Emezie handles the abuse in her book with the seriousness that it warrants. It isn’t for shock value; it is just the terrible reality. I was very pleased to have all my questions answered by the end of the novel. There were no loose ends surrounding Leonard’s actions and anyone else’s culpability in the end.

As the title suggests, themes of hypocrisy and secrets are woven into the story as well. For much of her life, Udonwa is comfortable making surface-level observations and judgments about the people she encounters. It takes a bit of time, but she is forced to grow beyond this and see the hypocritical behaviour in herself and in other characters. “I did not like to say things I did not want to be repeated back to me” is a line that she used which stood out to me. The catalyst that changes Udonwa’s perspective does arrive a little late in the pages, but I don’t think this dampens the plot enough to call it a flaw. After all, before we see Udonwa change, we must first know who she is before.

There is love and lust in this book, and these emotions play interesting roles in Udonwa’s journey. I believe there was more room to explore the coping strategies that Udonwa adopted when her life was turned upside down, but the novel was not supposed to be about that, and I appreciate that the plot was not stretched too far so as to weaken it. Udonwa’s vice is one that I had not come across in a female protagonist before, and I appreciated that Emezie included it in her story.

Perhaps the most important theme of the book is one of liberation: becoming free when a person accepts the truth of who they are and what they want out of life. Udonwa and her family must all decide whether they will do this, or whether they will stay on the path that Leonard tried so hard to set them on.

Emezie’s characters have distinct voices and attributes. It is Udonwa’s life that is central to the plot, but all of her family members have lives of their own. The story seems all the more real because of their different paths, which diverge and reconnect throughout the book. Udonwa notices each of them evolving in various ways, and Emezie is able to sustain the network with a writing style that seems effortless but carries so much. Our protagonist is undoubtedly an imperfect character, but she is easy to sympathise with. We feel her anger, her disgust, and we empathise with her shame. Her character arc echoes true tales of young women from families like hers.

This book could be a good start for someone who wants to get to know the work of Nigerian authors. I would recommend it for readers with a taste for family dramas with weighty topics and satisfying character growth.

Udonwa once asks another character whether he misses the old her, and he responds, “The past is there for a purpose: for reflection and correction, but never for regret.”