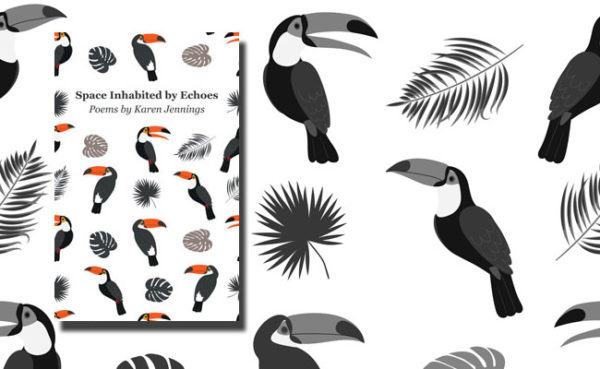 Until the publication of Space inhabited by silence (2018), Karen Jennings had established her reputation as a prose writer, having published her first novel, Finding Soutbek, in 2012. In 2014 her collection of short stories, Away from the dead, appeared; this was followed by an autobiographical novel, Travels with my father, two years later. These titles all appeared under the Holland Park Press imprint, as has this debut poetry collection.

Even before getting to the contents page, readers are given this synopsis of the volume:

Space inhabited by silence is a frank and poignant collection of autobiographical poems that transport the reader across two continents, and the vast internal shifts that accompany love, loss and translocation.

I would have thought this information might be better suited to the back cover. The synopsis is followed by a brief explanation, rather in the style and tone of a student's guide, of the subject matter and themes to be found in each of the volume's four parts. Here is the longest example:

Part II deals with the shocks and adjustments involved in emigrating to a foreign country in order to be with the person you love. After moving from South Africa to Brazil, Jennings describes with great honesty the impact this has on her new marriage and her own heart – significant in this era of migration, when many face these challenges.

I have to say I'm not entirely comfortable with this strategy of pre-empting readers' own responses to the poet's work. I find this preliminary material off-putting and unnecessary. I prefer not to be told what I'm about to read and how I should read it.

Reading Jennings's poems with their central themes of deracination, alienation, and acclimatisation and acculturation immediately brought to mind two poets who had experienced, and written poems about, these situations. The first was Peter Bland as he vacillated between Britain and New Zealand. Such intercontinental shuttling may be arduous and demanding in many ways, but they also produce subtle insights about getting adjusted to new environments, new social systems and norms, as well as other languages. For example, here are the opening lines of his poem "Advice to immigrants" from his 1990 collection, Paper boats:

For the rest of your life
there'll be two sets of voices –
those in the street
and those in your head.
When they meet
you'll be “at home”.

But questions remain: What if those "two sets of voices" never meet? Where would you be then? Is a perpetual sense of uprootedness the worst outcome, with chronic homesickness the least of one's worries?

Bringing these themes closer to home, I remembered reviewing Alan Finlay's That kind of door (Deep South Press) recently. He lives between South Africa and Argentina, a difficult and emotionally taxing existence, especially when children are involved. His volume begins in medias res, his bicontinental life already a reality. Jennings begins with poems about earlier love and its failure before moving on to the relationship that took her from South Africa to Brazil.

Moving elsewhere in the world, and becoming strangers, most folks have the well-meant intention of settling down and doing the best they can to become assimilated into their new environment, often by acquiring – or trying to acquire – some level of fluency in a foreign language. For Bland, moving between two English-speaking countries presented few problems in terms of language at least. But for Finlay and Jennings, acquiring Spanish or Portuguese was easier said than done, an early barrier to fitting into a new environment, of being "at home".

But I didn't do as well
as expected.
Not with change,
the shared house,
a new language.

The poet discovers many things foreign to her. There are "ants everywhere" (50), riders wearing "cowboy hats,/ checked shirts, boots" (51), in a country where "There are no/ seasons. Only light and dark, hot and wet" (56). One empathises with the poet's desperate homesickness, given the extent of the strangeness, the newness around her, and the deep-seated need to assuage that longing. This is the final section of ''Let me go'' (45):

Let me go, please,
let me return
to the places of my birth, to my
childhood, and more.
The streets in which I lived and
the gardens where they're scattered, all
my family but me.
Where they've mingled inexactly, taken up
by foliage in various degrees,
those straggling whispers pruned
to silence by my absence,
by my failure to come home.

This is Jennings at her most convincing, her writing nuanced with emotional overlays of nostalgia, loss, guilt, and desperation.

At the same time, the poet can produce a sharp-edged brusqueness when appropriate, as we can see in the two poems about her grandfather. The first of these opens with this line: "He isn't anything to me." The next three lines, which round out the opening section, are no less ingenuous:

A name, a photograph,
a memory of a pink shirt, though
that could easily be someone else.

The reason behind this rather austere attitude towards the poet's grandfather is expressed compactly in the last line of the second poem about him: "the coward's shameful bounty". I shall not reveal the events by which the old man acquired this harsh label, but they are both moving and disturbing.

Jennings has a sharp eye for description too, as can be seen in this extract from "The distance" (24):

Each morning the land is a
stretch of brown that cracks dryly as the heat
grows. The sky is large and wide, filling all
corners, and in the distance, a
suggestion of nothing more. Nothing
beyond dust and heat.

I'm sure that for every South African reader these words will bring to mind an image of his or her own particular fragment of the African landscape and all that it means.

While one cannot question the poems' contents with their emotional authenticity and honesty, one might have some concerns about the poet's technical skills, beginning with her use of form. Although she has included a couple of sonnets, generally speaking she uses "free verse". This much-used (and misused) form predominates in contemporary South African poetry in English, despite its numerous technical challenges. Which brings me back to the lines above.

It is a given in the craft of making poems that the last word of each line is so positioned because the end of a line is a place of stress and momentary pause, the end often replacing the use or overuse of punctuation. With this in mind, one might well ask why the poet would opt to stress "a", an indefinite article, rather than key parts of speech – "the land" and "the distance", for example – both of which carry substantial meaning. And why would one want to emphasise an indefinite article twice?

A similar shortcoming may be found in the sonnet "Morning alone" (17), in which the poet opts for the Shakespearean form, complete with decasyllabic lines:

You are asleep, the door closed against noise.
Though I cannot see you, I imagine
the rough curl of your hair in sleep, the poise
of lip upon lip, your slow breathing in.

There is no end to sleep it seems, as
though all the world were no more than a task
already complete. It has no value
left, a shallow thing now, an empty cask.

Yet, I sit and wait for when at last
you choose to emerge, tall and frowning, a
warm pillar of morning breath still bound fast
to sleep, set firm against the aging day.

But for me there is no day until you
wake, despite the fading light, the hours few.

The question arises: Why adhere to the traditional rhyme scheme except for line 7, where the word, "value" rhymes only with the words "you" and "few" at the end of lines 13 and 14 respectively? Without a structural purpose to link this deviation in the seventh line to the final two lines, it is difficult to justify its use.

Line 10 ends with "a", which would have to be pronounced "ay" rather than "uh" if it is to rhyme with "day". While one might well argue that the poet is using an eye rhyme here, one still has to ask why a poet would want to place the end-of-line stress on either "as" (line 5) or "a" (line 10). These are not the sort of shortcomings one would expect, even in a debut volume. But perhaps these matters can be explained, albeit speculatively, by the possibility that for a prose writer the right-hand margin is, generally speaking, of less import than it is for a poet.

And there are a number of examples of clumsy phrasing one would expect an editor or proofreader to have picked up and rectified before publication. Here are some examples.

Yet mostly we avoided them [pupils]

stood under a large tree
noisy with crisp packets

where it shat waterly
the melon we'd thrown out.

Doleful was its cry.

What is this anchor that rests
inside me, dragging me into solitude?
This callous insularity that weighs
me out apart?

Despite flaws in Jennings's poetic technique, the subject matter and the intimacy of her perspective results in insightful, sensitive and forthright poems.