In considering Antjie Krog’s writing oeuvre, what is apparent is the range of genres and subject matter she employs, and although her primary genre remains poetry she has, through political and autobiographical fiction writing, and through the translation of others’ and her own work, moved beyond a purely poetic profile and has engaged directly with other identities and different kinds of intimacy. 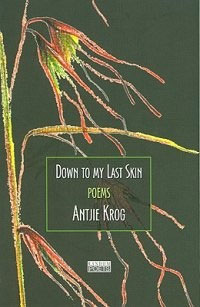 Thirteen years after Krog’s first anthology in English translation, Down to my last skin (2000), her second anthology, Skinned, has been published (2013). Ideally, Skinned has to be read within the thematic frameworks Krog has formed throughout her career as a poet, woman, wife, mother, journalist and political and social narrator. Ideally, we as readers would have read her iconic poem, “Ma”, published in her very first volume, Dogter van Jefta (1970), where she introduces at least two aspects of her poetics to the reader: that of her style (“poem/ without fancy punctuation/ without words that rhyme/ without adjectives/ just sommer/ a barefoot poem –”), and also, on a meta-poetical level, how her habitus as a poet will play out. Krog openly asks for amnesty for not being the kind of poet that she is (and will be) expected to be; that she will cross boundaries.

This approach highlights what Kristeva (1982; 2004:204) calls the relation between the internal dimension of a text and the external context, ultimately laying bare the authenticity of the subject in writing. The writer becomes a “subject in process and a subject on trial. As such the speaking subject is a carnival, a polyphony, forever contradictory and rebellious” (Kristeva 2004:204). When the separation between the subject and object is vague and they are pseudo-entities, a dialectic relationship is established between attraction and repulsion. The mother as object becomes the first victim of expulsion – the mother becomes the first abject in the process of abjection (Kristeva 1982, 2004:206). 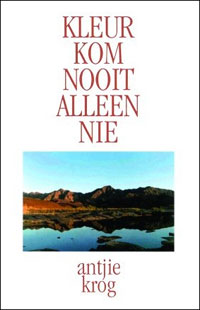 Given the inclusion of “Ma” in Down to my last skin, the absence of the poem in Skinned is compensated for by the very first poem in the latest volume, “poet becoming” (15), which is a translation of “Digter wordende” in the volume Kleur kom nooit alleen nie (2000). This poem echoes Krog’s description in A change of tongue (2003:105) of how, when she takes up the pencil, “everything inside her comes together. Fits. Each open synapse melts perfectly into her pencil and her entire being finds its balance. Her whole body feels light and infused with sound.” Poetry as an embodied act, reflective of its bodily, sensory and psychic process, is a constant thread in Skinned, resonating in “writing ode” (19), “transparency of the sole” (38) and in the section “becomings” (141). Including these poems in Skinned highlights the underlying materiality and embodiment of Krog’s poetic language, creating what Klopper (2004:6) describes as a “materiality, [a] rhythm and pitch of language, [a] vocalic range, [...], ... working together to create a body of sound, which is not separate from the physiological body but acts on it, in it, transforming it into the sound of its own articulation”.

The second part of the volume, titled “The lady as allegory”, comprises translated poems from Lady Anne (1989), none of which appears in Down to my last skin, thus opening up a new avenue of thought and a window for the English reader into what Krog describes in the introduction (11) as a wrestling with “a colonial vision”. It is no coincidence that Krog, at the age of twelve, blots out a picture of Lady Anne Barnard in her history textbook, cutting out, on the other hand, “the picture of the utterly handsome journalist John Fairburn” (Krog 2003:64).

Although Fairburn’s role in press freedom is mentioned in passing, it must have had an (un)conscious effect on Krog’s journalistic approach in her life as a writer. It is also not accidental, Krog’s rewriting at that stage, of a history that would later figure in her poetry. The poem “ending 1” is a fitting ending to this section, giving language to the dilemma the poet experiences in writing about the epic heroine, struggling to detach herself from having to have dealt with the other and the other’s kind of language. On a meta-level this can be read as a prelude to the last poem in the volume, “on my behalf” (170).

Expanding on the theme of writing, intimacy and history, the third section reveals glimpses of the “marginalized trajectories” (11) from which Krog detaches herself in “on my behalf”. The stone-desert narratives are carefully constructed to give voice to the speakers, the narrators of a part of the country that is seldom appreciated in literature for its simple, yet unique social and historical existence. The translations, done by Krog herself, speak of an intimacy with the language of the people of the Richtersveld, and an understanding of the landscape that shaped their existence. Giving them, as well as the many voices in the /Xam and African languages, a voice in English translation enriches the linguistic landscape of the country. Being a combination of translations from /Xam into English into Afrikaans, and of Sotho, Zulu, Xhosa into English into Afrikaans, this section of poetry is unique in terms of the translational processes that are visible and recognisable rather than invisible.

The most diverse section in Skinned is arguably “Vernacular white”. Starting with “land” (114), also included in Down to my last skin, Krog unswervingly lays bare the double hold this country has on her. Following “land” are two historical poems, “Bessie” (108) and a poem about an engraving of 18th-century Table Mountain (110), articulating “(… the mountain as forerunner/ Of how apartheid and forgiveness were applied against a continent’s clamour)”.

The inclusion of “toilet poem” (121) in Skinned is no surprise. Whenever a text utilises the abject – that which is expelled or abandoned – the self is depicted as unstable, breaking down the barrier between the inside and the outside, between that which is clean and appropriate and that which is not. What essentially happens, is that things1 like urine, defecation, menstrual blood, semen and vomiting threaten not only the clean body, but also human consciousness regarding individual identity and security (Mansfield 2000:83). According to Lacan (in Grosz 1990:88) all sexual organs and stimuli comprise a rim between two bodily surfaces – an in-between space between the interior and exterior body. The thresholds (of language: “territory of poetic themes”, “piss”, “shit”; and content: “changing tampon and pad to pee in townships”, “tampon – swollen red mouse”, “every nerve ending erect with revulsion”) are aptly portrayed in this poem. According to Viljoen (2009:191–2), Krog, in Otters in bronslaai (1981), starts moving towards a more grotesque, abject presentation in her poetry where she uses the body in graphic relation to other entities such as poetry and the landscape. In view of her crossing and shifting of boundaries, and in view of the presence of the abject in her poetry,2 Kristeva’s (1982:207) notion of literature as apocalypse is relevant. This kind of literature is situated on a delicate boundary where identities either don’t exist or barely exist: where identities are double, vague, heterogeneous, metamorphosed, and abject. Essentially this kind of literature is an encoding of man’s struggle – his most intimate and poignant apocalypse. The question remains: “Does one write under any other condition than being possessed by abjection, in an indefinite catharsis?” (Kristeva 1982:208).

In this very section we also find the most beautiful poems about Table Mountain, as well as Krog’s “country of grief and grace” (132). Apart from an entirely political reading, the latter poem could also be read as a reference to English and Afrikaans, where the voice of the other is slung in anger at the writer who reaches out past the boundaries of truth and exclusion for the sake of survival, greater recognition and a larger presence in a country that belongs to “the voices of those who live in it”. In the fifth part of this poem, “this body bereft” (139), Krog introduces the title of her next volume of poetry:

The body, the text, the language of the poet are made visible, something which according to Nel (2008:52) alludes to the bereft body. The element of loss and grief embedded in the title not only indicates bodily degeneration, but could also refer to the loss and grief as an integral part of the poet’s “moving closer” to a different yet closely interlinked literary field in South Africa through translation. It could point to a bereavement of the poet’s language and poetry through writing in English. 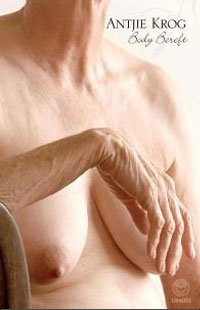 The fifth and final section of the volume includes poems from the volume Body bereft (2006), and to someone who has read the volume, the poems in this section are nothing new. However, the ageing body has a spectacular presence in these texts through descriptions of bodily parts and bodily functions, but also in the materiality of the text itself, the structure of the poems. The semiotic aspect of these poems disturbs the symbolic, creating a bodily landscape that goes hand in hand with the bodily field of reference (Kristeva 1986:120). The poet thus becomes the text, inhabits the text and becomes part of the articulations and rhythms of the text. The poem “it is true” (153) specifically embodies this textual-bodily landscape.

Skinned ends with what could be seen as a poem of self-celebrated deliverance: the poet granting herself freedom from others’ unapproachability, from accountability, from guilt in all its shades, from being the voice of the marginalised and from taking on another’s and others’ skin(s). Ultimately, the poet is free to move beyond boundaries, to move in the absence of boundaries, inhabiting, as it were, the realness of the ageing body and emptiness as a final attempt at being and belonging.

Skinned, together with Down to my last skin and Body Bereft, indicates an important trope in Krog’s becoming and being a poet, translator and translated poet in English. The volume is a good representation of her oeuvre as well as of the essence of her poetics. Although a reading of this anthology will be much enhanced by knowledge of Krog’s oeuvre, it is an invaluable source of Afrikaans poetry in translation, reflecting also on the internalised processes that writing and translating (as writing) involve.

1 I deliberately use the word “things” as it refers to both the tangible and the intangible - “physical flows” or “bodily refuse” in a bodily context (Mansfield 2000:83).

2 On taboo, see Douglas (1966); on the carnivalesque  and the grotesque body, see Bakhtin (1984), specifically his questioning of the boundaries between official and non-official spheres in society and its role in social transformation.