This year's Sanlam Sing 'it competition ended on a high note, with almost 40 000 Facebook fans voting for their favourite Sing 'it song. LitNet and Sanlam had invited South Africans over the age of 18 to submit their lyrics for top South African artists AKA, The Soil, BlackByrd and Straatligkinders, and Frans van Wyk, Nothando Zungu, Beulah Harris and Giovanni Coetzee were the four finalists, who then had to battle it out for the grand prize.

Here are the finalists' songs:

Frans van Wyk is a 26-year-old singer-songwriter from Pretoria. He submitted three songs and this was his first year of participating in the competition. Frans is the lead vocalist in a local band called Hey, River!.

Straatligkinders chose Frans's lyric from the thousands of entries submitted. "It was great to see how the standard of lyric entries has improved since last year," said Bouwer Bosch, who was also part of the competition in 2011, when his band, Dans Dans Lisa, also won.

Frans became suspicious when Bouwer arrived at his home in Pretoria. "I knew you would announce the winner only on Friday," he told Sing 'it. "I had no idea what was going on."
Frans was on his way to work at a local pizza restaurant when the Straatligkinders front man pitched up with a camera. Frans was totally shocked and gave Bouwer a big hug. "Let me just call my boss and tell him I’m quitting," he joked. Frans will put the money to good use: some of it will go towards paying off his car, and his band will also share in the prize, since he is planning to produce a CD with some of his winnings. "Who knows, maybe I'll have an album out by next year." He also plans to produce a music video or two. 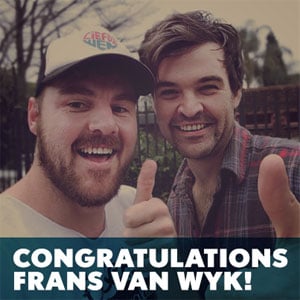 "Sing 'it is a brilliant platform for people who want to be recognised in the songwriting industry. It's also chance for so many aspiring writers to get their lyrics out there and not let their talents go to waste," said Frans.

As part of the grand prize, Straatligkinders will also produce a music video of the winning song. Frans will get the opportunity to make a cameo appearance in the video, which will be aired exclusively on MTV (DStv channel 130) early next year.

"It is very important for us as a band to be part of project that supports young and upcoming talent and we love being part of something that no one else is currently doing in South Africa," says Bouwer Bosch. "We would like to thank all of the Sanlam Sing 'it fans who voted for us and downloaded the song. We already have big plans for the video, but all we can say at this stage is that it will be a funny one. We are also very excited that Frans will be appearing in the video."

"This competition has made a significant contribution towards LitNet's project to give writers and artists a platform to have their voices heard," said LitNet executive editor Etienne van Heerden.
"This year's songs are of outstanding quality and show a major improvement on lyrics from previous years," said Sanlam senior sponsorship manager André Kearns. "Frans's song deserves its number one spot and we would like to congratulate him on this great achievement."

"Sanlam is proud to support projects that promotes creativity and a love for music. We want to celebrate cultural diversity through sponsoring arts and culture initiatives like the Sanlam Sing 'it lyric writing competition. This year's competition once again highlighted the significance of music in South Africans' lives. We are happy to have been able to contribute towards the creation of a platform where South Africans can let their words live."

Read the interview with Frans van Wyk about his winning song.